The taller, stronger, younger Benavidez battered and bloodied Dirrell until the former champion’s corner men asked to have their scheduled 12-round, 168-pound title fight stopped in the ninth round. Their bout was competitive in its first half, but Benavidez wore down Dirrell and overpowered him in the last few rounds, until referee Thomas Taylor stopped the bout at 1:39 of the ninth.

The 22-year-old Benavidez (22-0, 19 KOs), a Seattle resident raised in Phoenix, regained the WBC super middleweight championship that was stripped from him after he tested positive for cocaine a year ago. Dirrell (33-2-1, 24 KOs) won the then-vacant championship when he defeated Turkey’s Avni Yildirim by technical decision February 23 at The Armory in Minneapolis. 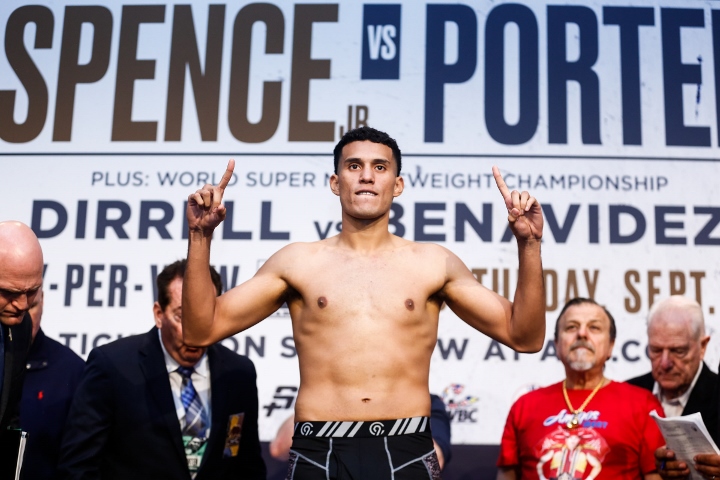 “This was one of the hardest fights I’ve had,” Benavidez said. “It was very tactical. But I worked my jab the whole time. It wasn’t easy. I’m now the youngest two-time champion of the world, from Phoenix, Arizona. I’ve got a lot of respect for Anthony Dirrell, especially the way I fought tonight.”

The 34-year-old Dirrell (33-2-1, 24 KOs), of Flint, Michigan, was stopped inside the distance for the first time in his 14-year pro career. His lone loss before Saturday night was a majority-decision defeat to Badou Jack, who won the WBC super middleweight title from him in April 2015.

Sensing the end was near, Benavidez viciously assaulted Dirrell early in the ninth round. He landed an array of hard lefts and rights that left Dirrell badly hurt, with his back to Benavidez’s corner.

Dirrell literally ran out of the corner, across the ring, to avoid Benavidez. A few seconds later, Dirrell’s trainer, Javan Hill, instructed a California State Athletic Commission inspector to tell Taylor to stop the fight.

Taylor’s back was turned, so it took him an additional 10 seconds or so to actually step between them and spare Dirrell more punishment.

A ringside doctor looked at Dirrell’s cut before the eighth round began. Once it started, Dirrell fought out of a southpaw stance to give Benavidez a different look.

A low blow by Dirrell caused a brief break in the action near the middle of the seventh round. Benavidez didn’t need much time to recover and drilled Dirrell with a left uppercut as soon as Taylor allowed them to box again.

Blood poured from Dirrell’s eye after Benavidez delivered that shot, which made Taylor take Dirrell to a ringside physician to look at the cut.

Benavidez blasted Dirrell with a right hand in the sixth round, as Dirrell moved backward. At some point in that round, a nasty gash opened along Dirrell’s right eyelid as well.

Dirrell confirmed after the fight that one of Benavidez’s punches opened that cut.

Benavidez unloaded a barrage of power punches on Dirrell early in the fifth round. Dirrell tried to tied up Benavidez’s right arm, but took several hard shots during that sequence.

Dirrell landed a right hand that backed Benavidez into the ropes late in the fourth round. Dirrell tried to follow up, but Benavidez covered up and eventually stormed toward him as Dirrell retreated.

Benavidez blasted Dirrell with a left hook to the body in the third round. Dirrell felt that shot, but fired back a hard right hand of his own to prevent Benavidez from punching temporarily.

A straight right hand by Dirrell, fired from a long distance, landed on Benavidez’s chin with just over 30 seconds to go in the second round. Benavidez backed up Dirrell with a stiff jab later in the second.

Dirrell threw rights and lefts to Benavidez’s body throughout the first round, but Benavidez kept coming forward.

I saw the fight this weekend, the fighters looked a division apart once inside the ropes. The only intelligence Benavidez showed on the night was in knowing Dirrell was open to being bullied. He may have performed more skillfully in…

Benavidez won that on brute force and ignorance, which is ok when the opponent is smaller and already seems mentally defeated from the start. I doubt it would work against Callum Smith though, and BJS would dance around pot-shotting him…

[QUOTE=Drigo;20087615]A real mexican warrior that deserve Canelo place. Buenavidez VS Alvares will be a war...[/QUOTE] Can’t keep Canelo’s **** out of your mouth can you?