David Avanesyan put an exclamation point on his 2019 bouncbeack campaign.

The resurgent welterweight made the second successful defense of his European (EBU) 147-pound title after stopping locally based Jose del Rio in one round Thursday evening in Barcelona, Spain.

A wicked body shot put del Rio down and out for the full ten count, ending the fight at 2:06 in the opening round. 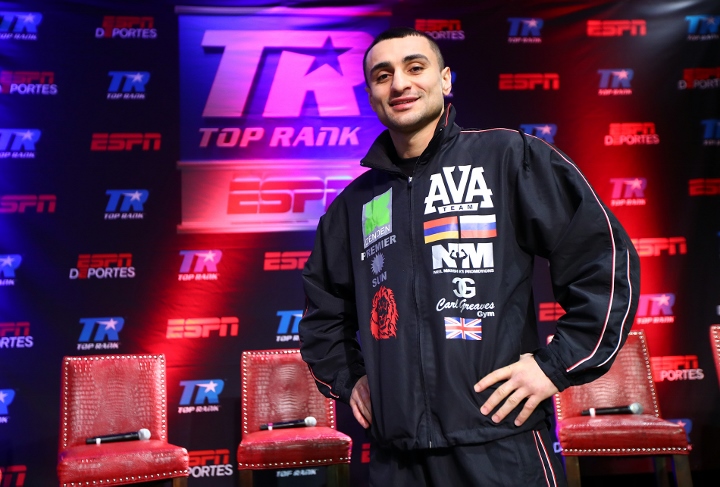 The bout marked Avanesyan’s third straight in Spain, a nation which has breathed new life into his career. The 31-year old Russia-born welterweight—who is now based out of Newark, England and handled by media-friendly veteran manager Neil Marsh–had lost two of his last three starts heading into the new year, but scored a massive upset with a come-from-behind  9th round stoppage of previously unbeaten Kerman Lejarraga this past March.

The rematch proved the original wasn’t a fluke, with Avanesyan drilling the former top-rated contender inside of a round, with both bouts taking place in Bilbao, Spain. Even less time was needed for the European titlist to rid himself of del Rio (29-9-1, 7KOs), who was a longshot to begin with and even less competitive once the opening bell sounded.

Avanesyan was relentless in his attack, targeting the body early but mixing up his attack with punishing right hands and left hooks upstairs. del Rio was under siege early, never able to land anything of consequence in return and hopeful to simply ride out the storm.

That moment would never come. Avanesyan put a sudden end to the fight, landing a picture-perfect left hook to the body, with del Rio crumpling to the canvas in pain. Referee Robin Dolpierre would’ve been well within his right to stop the fight on the spot, but issued a count to make the knockout official.

With the win, Avanesyan storms to 26-3-1 (13KOs) and can now look forward to a mandatory title defense versus England’s Josh Kelly for his first order of business in 2020. The win is his third straight following a knockout loss last February to Egidijus Kavaliauskas, who challenges pound-for-pound entrant Terence Crawford for a welterweight strap Saturday evening in New York City.

The aforementioned loss was Avanesyan’s second in a span of three fights, having also dropped a 12-round decision to Lamont Peterson in a title-conceding Feb. 2017 clash, just nine months after scoring a May 2016  title victory over Shane Mosley, who earlier this month was elected into the International Boxing Hall of Fame.

Jonathan Alonso returned home and to the win column, following a 10-round decision over Samuel Gonzales in a competitive junior welterweight heat.

Scores were 98-92, 98-93 and 97-94 in favor for Alonso, a Dominican-born prospect now based out of Spain who suffered his lone career defeat in his birth country in his most recent fight. In Gonzales—a 31-year old Venezuela born gatekeeper now based out of Italy—he was dealt a stubborn foe, in a bout with several close rounds but the night ultimately landing in favor of the regionally based prospect.