The big show organized by EC Boxing at the Barclaycard Arena in Hamburg, Germany is now in the books.

In the main event, Mario Daser (13-0, 6 KOs) picked up the biggest win of his career over world title challenger and former top contender Ola Afolabi (22-6-4, 11 KOs), with a third round stoppage.

Afolabi, who struggled hard to make the weight limit on Friday and spent hours in the sauna, saw his corner threw in the towel in what seemed to be an uninspired effort. A very odd ending and many fans were screaming the fight was fixed as money seemed to flow in on Daser prior to the fight. It was the third loss to Afolabi in his last four fights. 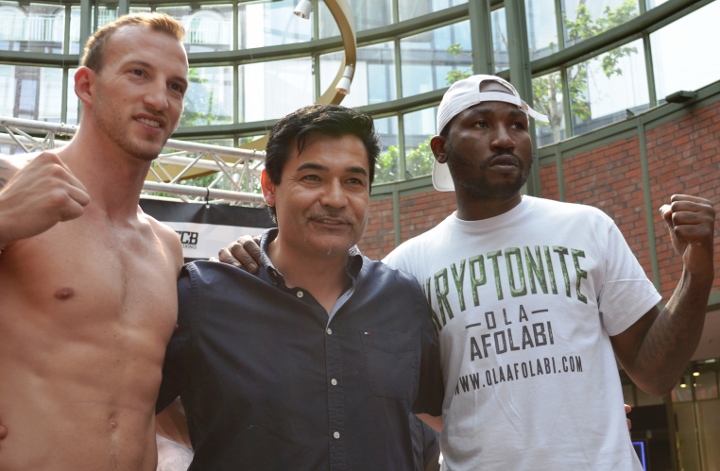 Igor Mikhalkin (20-1, 9 KOs) won a twelve round unanimous decision over previously undefeated Thomas Oosthuizen (27-1-2) to capture the vacant IBO light heavyweight title. The scores were 118-109 by all three judges.

Keles (28 years old) represented Turkey at the 2012 London Olympics. The Trabzon born fighter won a gold medal in the 60 kg of the 2011 European Championship. Keles met with Armenian-born Dutchman Rafik Harutjunjan for the WBO super lightweight European championship belt in the ninth match. Keles knocked Harutjanjan down in eighth and won on points (96-95, 95-94, 97-92).

He talked after bout - “I see what I should improve for my boxing. I’ll work hard, this is just a start for me.

Keles said he took the example of Floyd Mayweather's style. He stated that the camps in Turkey and Germany got him very well prepared so he was ready for the bout. He said that his goal was to take the WBO belt and go up the top.

Tommy O is the biggest let down in SA boxing history! trains on beer & spars in the pub!!..

All of the fights didn't go as I expected. Figured Afolabi would at least put up a fight, but I wouldn't be shocked if they gave him a pay day to come out of retirement and lie down for Daser.…

[QUOTE=Gillie;17684441]Wasn't Oothuizen supposed to have been a super middleweight prospect some years back? I seem to recall him fighting on HBO and underperforming.[/QUOTE] Yeah, some people were talking about a fight with him and Ward.