This Saturday as part of the Showtime broadcast from Frisco, Texas, Daniel Roman makes the second defense of his WBA super bantamweight title against his mandatory challenger, Moises Flores.

And should he get past the tall Mexican, he has a very clear idea of who he'd like to face in the future.

"Any belt-holder, as long as it's a challenge for me, I'm ready to take it," said the reserved Roman on Tuesday at the Maywood Boxing Club before his last day training in Southern California on Tuesday evening before departing for Texas the next morning. 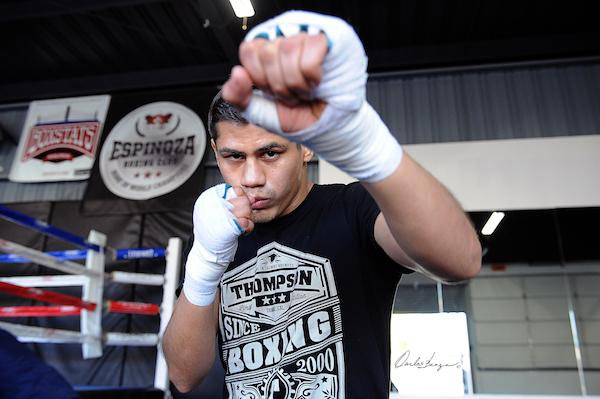 Vargas is on the shelf with a hand injury from his last fight, while Dogboe has an ESPN televised defense which is being positioned for a date of August 25.

When asked which one would be the easiest to consummate, Alex Camponovo, the General Manager and matchmaker for Thompson Boxing, told BoxingScene.com - "I know Danny wants to fight at least two more times this year. We're in the middle of the year so we'd go in September and some time in December.

"I think the easiest plan would be to unify the IBF, we'll see how that goes. We've already talked to Dogboe's management, talked to Top Rank. Apparently they have a fight coming up in August. We'll see, those two seem to be pretty open. HBO and us have had conversations about doing a unification with the Golden Boy kid (Vargas) but the economic did not work out."

Roman (24-2-1, 9 KO's) captured his title last September in Japan by stopping Shun Kubo in nine rounds and then went back there to defeat Ryo Matsumoto via 12-round decision on February 28th.

Would like all those fights if he beats Flores, especially the Vargas fight

Alex Camponovo is right, Ryosuke Iwasa would be the best option in unifying 122 ; Danny took the WBA in Japan ( Rysosuke's homeland ) and they both are the same age and virtually have the same record with belts.…

Roman vs Dogboe should happen in December.

Would love to see Roman/Dogboe it would be an all out war.

Roman's a Real old school Champ . Humble , hard working and Dedicated . Too many Fans sleeping on him . Shame.