Later tonight from the Wintrust Arena in Chicago, Illinois, Danny Roman (25-2-1, 9 KOs) makes the third defense of his WBA "regular" super bantamweight title against Gavin McDonnell in what is his debut on DAZN.

Should he get past McDonnell makes it very clear what his future goals are, "I would like to unify. I've been saying it for the past few fights. I'm here to fight the best, I'm not backing down from nobody, the other champions, WBC, WBO and IBF. I'm ready. But what's first is first, I've got Gavin."

Currently the WBC titlist is Rey Vargas, the WBO champion is Isaac Dogboe with TJ Doheny the IBF belt-holder. It's not clear just which of these potential unification bouts is the most realistic given the fractured nature of the current boxing landscape. 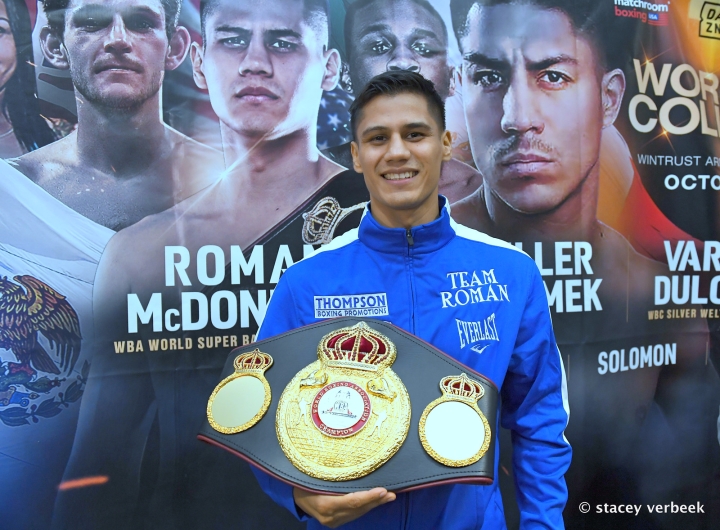 Alex Camponovo, the general manager and matchmaker for Thompson Boxing(which promotes Roman) tells BoxingScene.com,"We don't have any problems with any promoters, first of all. The networks, whether they can work with each other or not, I think that's going to be a thing of the past considering what's going on with the streaming for boxing and the fact HBO's out of the business as of now - or as of many months ago - and at the end of the day, money does talk for either side. Whether it's for us or for a possible opponent."

A few months ago, Thompson Boxing cut a deal with Matchroom Sports to be a part of the DAZN platform.

"I know of Eddie Hearn's willingness to jump in and get us the best deal possible with somebody out there who might be with another promoter. We've already had conversations with Isaac Dogboe and now we have the possibility of doing a unification with Doheny, who won the title. Even Rey Vergas, Rey was a fighter that was featured on HBO a couple times and sooner rather than later, Canelo (Saul Alvarez) and Golden Boy will be making a move to another network because they're going to need an outlet and that's also a possibility."

Regardless, Roman is in a good position.

Camponovo continued, "we're very excited about the future not just for the fact of what we have ahead of us but what Danny can accomplish. We're in a perfect position. We've always been independent  in the way we do our things as a company, never had the great fortune to have a network backing us so we already know how to navigate these waters in the sport and we're always going to make the best deal possible for Danny Roman."

[QUOTE=Andre_parker1;19170845]dogboe fûcks him up,he better stay away from that kid,that kid is like the Errol Spence of 122lbs[/QUOTE] Danny will school that midget Dogsh.it :boxing:

He should fight Rey Vargas.

dogboe fûcks him up,he better stay away from that kid,that kid is like the Errol Spence of 122lbs

Roman is just the WBA Champion. They only use the "Regular" distinction when they have a Super Champion, which they do not. If he does unify (or defends it three more times), he himself will be elevated to "Super" and…