Flores originally weighed in at 123.5 lbs. and only managed to shave half a pound during the two hour allotment given to him to come down to the super bantamweight division limit of 122 lbs.

Roman, 28, was stunned by the challenger's inability to come in at the contract weight. 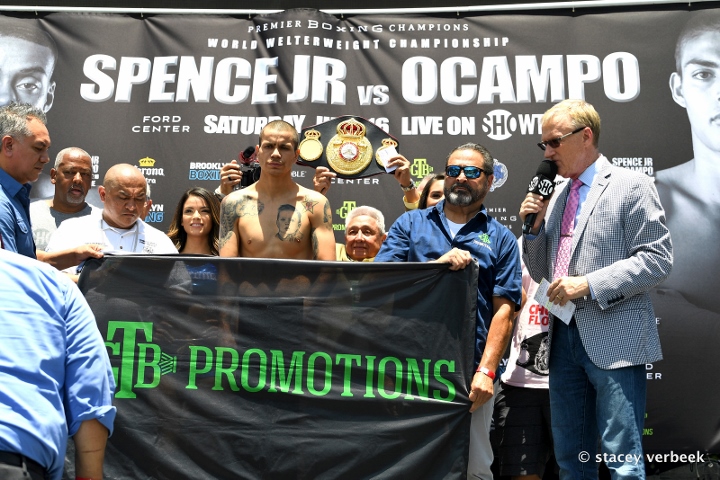 "I was a little surprised [he didn't make weight] because it's a world championship fight and you expect him to be professional," said Roman, who is from Los Angeles. "I trained with heavier guys than me so I'm ready for whatever he brings."

Due to Flores' misstep, he is ineligible to win the world title. Roman, on the other hand, retains the title even in a defeat.

The 12-round world championship fight originates from the Ford Center at The Star in Frisco, Tex., and will be televised on SHOWTIME CHAMPIONSHIP BOXING beginning at 9 p.m. ET / 6 p.m. PT this Saturday.

Bernstein provided expert analysis for the largest pay-per-view event in television history.  He ranks the Floyd Mayweather vs. Manny Pacquiao “Fight of the Century” the most significant broadcast of his career, one that spans three-and-a-half decades.

“I have great memories throughout my more than 37-year television career, but the last 15 years at SHOWTIME have been the most productive and enjoyable,” said the Chicago native and longtime Las Vegas resident Bernstein. “I have worked with extraordinary colleagues both in front of and behind the camera as we chronicled some of the most important and exciting boxing matches of this era.”

Bernstein was ringside providing expert analysis when Anthony Joshua TKO’d Wladimir Klitschko in the spring of 2017 in front of 90,000 raucous fans at Wembley Stadium in London for the IBF and WBA heavyweight world title belts. He places that at No. 2 on his biggest matches list, with Mayweather vs. Conor McGregor right behind that at No. 3. Mayweather also gets the nod at No. 4 as boxing’s all-time great dominated Canelo Alvarez in 2013. Bernstein’s fifth most memorable all-time SHOWTIME moment was in Manchester, England when Joe Calzaghe dominated Jeff Lacy in the mega-fight dubbed “Judgment Day.”

“I’ve had a front row seat to watch great champions in great matches,” Bernstein said. “And I’ve participated in what I think is the best television production in the sport of boxing.  I'm honored to have participated in this special period of SHOWTIME Boxing and I am energized by the great fights of today and the future of the sport.”

[QUOTE=sammybee;18865082]If Danny wins, he should pursue a unification with Isaac Dogboe in December. It will be a fantastic fight.[/QUOTE] Agreed, tried to send green Rep for this comment 👌

Did he make weight against Rigo ? Mexican BUM and actor !

[img]https://i.imgur.com/8yM36Lk.gif[/img] Danny is going to school this bum like Shun Kubo.

If Danny wins, he should pursue a unification with Isaac Dogboe in December. It will be a fantastic fight.