Roman won their 12-round, 122-pound WBC elimination match by unanimous decision in the fourth fight of Showtime Pay-Per-View’s event at Mohegan Sun Arena. Judges Kevin Morgan, David Sutherland and Don Trella all scored the fight 116-112 for Los Angeles’ Roman, who won by bigger margins than the action appeared to warrant.

The 36-year-old Payano (21-4, 9 KOs) got off to a strong start and consistently countered Roman, even while mostly boxing off his back foot. Roman turned up the pressure in the final few rounds, but CompuBox still counted 109 more punches overall for Payano (261-of-804 to 152-to-633). 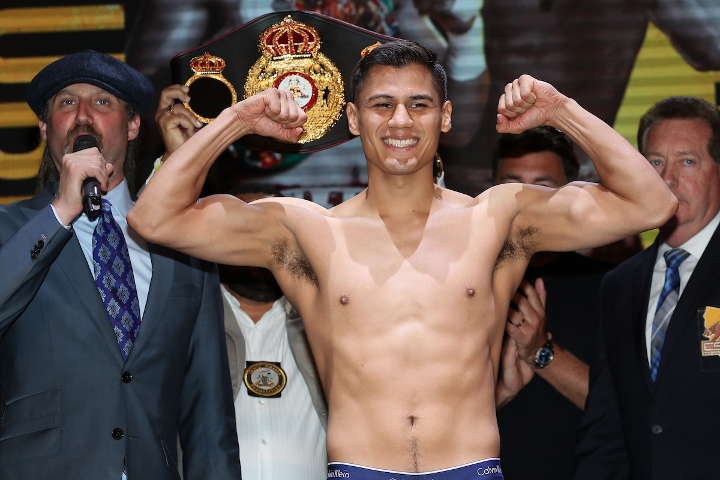 Payano hadn’t fought since Luis Nery knocked him out in the ninth round of their July 2019 bout at MGM Grand Garden Arena in Las Vegas.

That sequence should’ve counted as a knockdown for Roman because the ropes kept Payano from falling to the canvas.

Payano stood his ground at times in the 11th round, yet Roman out-landed him in those three minutes.

Roman out-landed Payano during the 10th round, when Payano appeared to wear down. A right hand by Roman clipped Payano as he tried to fight out of a corner in that round.

Sensing he was behind, Roman threw more punches in the ninth round. He couldn’t hurt Payano, even with the flush left uppercut he landed during that round.

An aggressive Payano unloaded power punches on Roman near Roman’s corner early in the eighth round. Roman made Payano move backward later in the eighth, but his aggression was ineffective.

Payano’s left to Roman’s body connected with under a minute remaining in the sixth round.

Payano caught Roman with a short, right hook in an exchange that occurred with just under a minute to go in the fifth round.

Payano landed a right hook with about 1:15 to go in the fourth round. Roman’s right hand connected when he had Payano backed into a corner late in the fourth.

Roman kept pressuring Payano in the third round. Sometime before the midway mark of the third, a cut opened above Payano’s left eye.

Payano landed three hard, left hands to Roman’s body during the final minute of the third round. Those shots slowed down Roman.

Roman kept Payano on his back foot for most of the second round, when the accurate technician caught Payano with several right hands.

Payano and Roman traded in the center of the ring just before the halfway point of the opening round. Payano’s left-right combination caught Roman with about 15 seconds to go in that first round.

Payano one of the few remaining proud descendants of the original Taino Indian Natives from the Dominican Republic.

The aggressor coming forward eating a lot of punching and getting outworked should be gifted any credit at all. That was a blatant robbery from the old man. Look at Danny Garcia, always coming forward but out boxed & outworked…

[QUOTE=Goldie;20782076]He fought off of the back foot and still out three and out landed his opponent decisively. I thought that it was a bad decision. I had payano winning.[/QUOTE] Payono was head hunting, compubox is trash. Roman landed a lot…

[QUOTE=Bronx2245;20781180]Payano deserved at least a draw! Roman got outboxed by an old man! Rigo would light him up![/QUOTE] Rigo only lights up his viewers night lights homie.

[QUOTE=tokon;20782047]Payano appeared to lack enough pop to discourage Roman, and boxing off the back foot continually cost him the rounds.[/QUOTE] He fought off of the back foot and still out three and out landed his opponent decisively. I thought that…