There was no question about what happened during this Moises Flores fight for the WBA super bantamweight title. 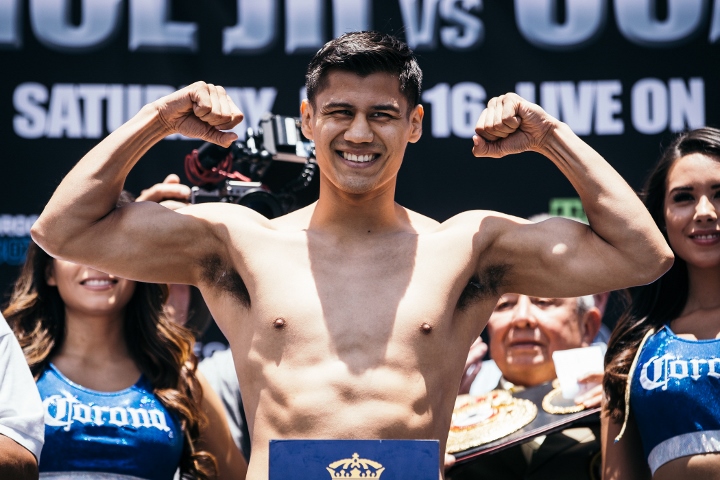 Roman had his way with Flores in the 11th and 12th rounds, when a fatigued Flores absorbed numerous body shots and occasional right hands to his head.

The 10th round mirrored many of the first nine, as Roman consistently hit Flores to the body and made Flores pay at times to his head for recklessly plowing forward.

Flores and Roman both switched to southpaw stances right after the midway point of the ninth round. Flores briefly had some success, but Roman turned back to his right-handed stance and landed a hard right uppercut when Flores attempted to smother him.

Roman buckled Flores’ legs when he landed a right hand to his head with 25 seconds to go in the fifth round.

Roman hammered Flores to the body throughout the fifth round. Flores complained to Calo-Oy just before the halfway point of the fifth round because Flores felt Roman’s left hand hit him in his back.

Roman rocked Flores with a left uppercut that knocked Flores off balance just before the fifth round ended.

Flores landed a lunging left hook just before the midway mark of the fourth round. Roman drilled Flores with a flush right hand with just over 10 seconds to go in the fourth, but Flores took it well.

Roman and Flores took turns hitting each other to the body during the second half of the third round.

Roman connected with back-to-back left uppercuts when there was just over a minute to go in the second round. Flores and Roman traded power shots to the head and body during the final 10 seconds of the second round.

Roman hit Flores with an overhand right to the side of his head at the 1:20 mark of the first round.

Flores officially weighed 123 pounds, one pound too many to fight for Roman's title.

Flores first weighed 123½ pounds, 1½ pounds over the super bantamweight limit of 122. Flores was given two hours by the Texas commission to come back and make weight, but he couldn’t lose that final pound.

The 31-year-old Flores fought for the first time since his fight against Rigondeaux ended in a controversial no-contest.

Cuba’s Rigondeaux (17-1, 11 KOs, 1 NC) hit Flores with a left hand after the bell to end the first round. That shot left Flores sprawled out on the canvas, and he said he couldn’t continue.

Referee Vic Drakulich initially ruled it a first-round knockout victory for Rigondeaux. The result later was changed to a no-contest by the Nevada State Athletic Commission.

A good win for Roman but will the style like that he's going to have a short career especially if he moves up a weight but he's exciting to watch but that one judge Caizis who scored it 116-112 ...they…

Danny vs Dogboe unification should happen next.