Danny Garcia: If My Dad Thinks You're an Assh*le, He'll Tell You

Even when they’re not in the same room—or even the same state—Danny and Angel Garcia remain an inseparable father-and-son duo.

The automatic linking of the two largely stems from the elder Garcia constantly making his voice heard and presence felt whenever on site for any given event involving his son.

The former two-division titlist flew solo for Tuesday’s press conference in Los Angeles to formally announce his April 20 PBC on Fox headliner with Adrian Granados. Yet among the few questions he was forced to field, arose the subject the balance between father and son. 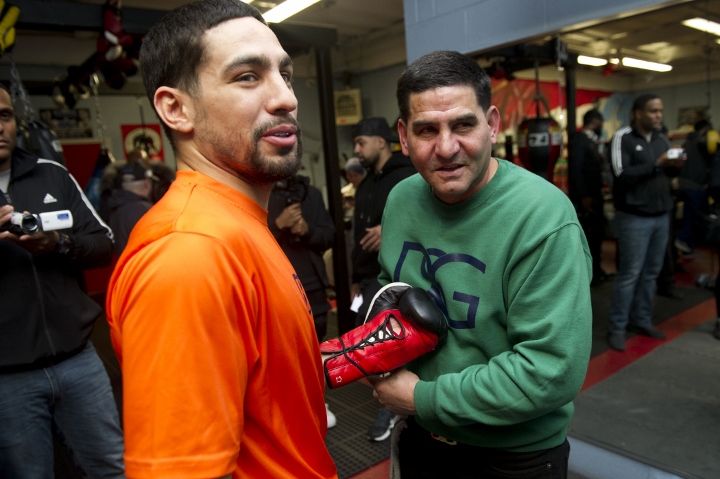 “We are different as far as personalities, but we both have the same heart,” Garcia (34-2, 20KOs) explained of his tight relationship with Angel, who also serves as his head trainer.

Father and son will be reunited when Philadelphia-bred Garcia returns to training camp for his bout with Granados, which will take place at Dignity Health Sports Park in Carson, Calif. The bout will be his first since dropping a narrow decision to Shawn Porter in their vacant welterweight title fight last September in Brooklyn, New York.

At some point during fight week, Angel will find his way to a microphone–or perhaps even face-to-face with the first person to rub him the wrong way. It’s something to which Garcia has grown accustomed from birth through present day, and which he’s always prepared to diffuse and ultimately defend.

“We have a strong relationship, though. He’s my father, he’s my best friend. I wish everyone can have the same relationship we have.”

[QUOTE=BIGPOPPAPUMP;19601958]Even when they're not in the same room-or even the same state-Danny and Angel Garcia remain an inseparable father-and-son duo. The automatic linking of the two largely stems from the elder Garcia constantly making his voice heard and presence felt…

Danny is Ok as a fighter but below the level of the top guys at 147. He's never been super impressive to me and looked like a B fighter at best at 147. I like him being in the mix,…

[QUOTE=Dramacyde;19602102]Angel's act is played out since Danny received them 2 ass whippings![/QUOTE] Yes those 2 a.ss whippings That 2/3 of the judges in both fights scored 7-5 . What a beat down Angels the man , Danny’s the goods ,…