Danny Garcia: I Needed a Break Mentally, Physically From Boxing

The former welterweight and junior welterweight champion needed a mental and physical break from boxing following his split-decision defeat to Keith Thurman in their 147-pound title unification fight March 4. It wasn’t until about six months later that he started feeling the urge to fight again.

“I got a much-needed rest,” Garcia told BoxingScene.com. “I feel good, I feel fresh and I’m motivated, excited to go out there.” 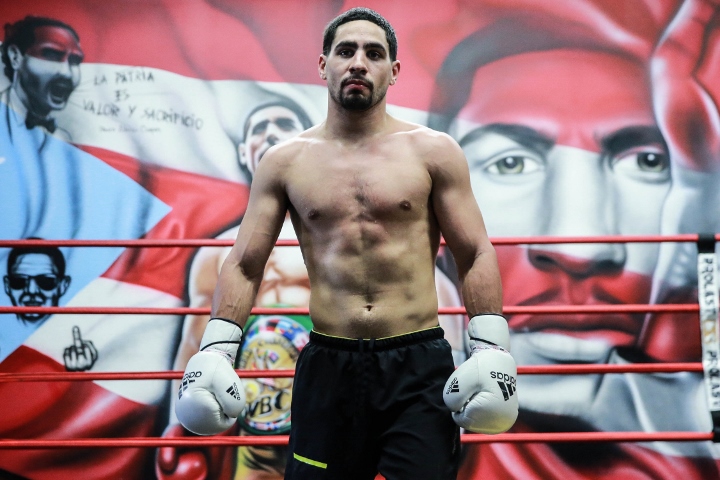 “I was champion five, six years,” Garcia said. “It’s a lot of pressure. It’s a lot of hard work, a lot of dedication. Sometimes it’s good to just let your body rest and let your hard work show [in] your life, and that’s what I was doing.”

The Philadelphia native has felt refreshed since he started training late last year for his 12-round welterweight fight against Rios at Mandalay Bay Events Center in Las Vegas (Showtime).

“If you don’t have those things, you can’t be a top-level fighter. And you’ve just gotta know how to control it – know when to turn it on and when to turn it off. I had to just relax a little bit to make the comeback.”

Garcia isn’t concerned about ring rust holding him back when he encounters Rios, who’s a big underdog.

“I’ve been boxing for a long time,” Garcia said. “I’ve just gotta make sure I get some good sparring in, like I’ve been doing already, to knock off all that ring rust in the gym. But other than that, I feel good. I don’t think that’s gonna be a problem.”

[QUOTE=etech1;18408255]STFW if salka was at a catch weight? What you laid out, doesn't erase the long layoffs, and mediocre competition, (relative to him supposedly being an elite at 140/147.) And his comeback fight is Rios?? Seriously? Does that impress you…

[QUOTE=Scipio2009;18407658]... Herrera fight was Danny Garcia's last fight at 140lbs, so not really sure what your beef is here. Salka was a catchweight fight, and the Peterson and Paulie fights were both non-title at 147lbs, before he fought Robert Guerrero…

[QUOTE=etech1;18405315]September 2013 he beats matthysee. Good win. I was a fan. Then it took him 6 months to fight Herrera. Long layoff, but matthysee was a tough fight, so I was ok with that. Herrera lost every time he stepped…

nothing wrong with having a break

[QUOTE=etech1;18405315]September 2013 he beats matthysee. Good win. I was a fan. Then it took him 6 months to fight Herrera. Long layoff, but matthysee was a tough fight, so I was ok with that. Herrera lost every time he stepped…