CARSON, Calif. —  Raymond Muratalla, from nearby Fontana, California, put on a show for the many fans who made the drive to Dignity Health Sports Park to see his six-round lightweight bout on Saturday.

Muratalla dropped Jose Cen Torres three times in the third round before the referee stopped it with two seconds left. Muratalla’s supporters gave him a standing ovation as he made his way back to the locker room. Muratalla improved to 7-0 with five knockouts. The bout was part of the Danny Garcia-Adrian Granados PBC on FOX undercard.

For the first knockout of the day, Shon Mondragon stopped Hugo Rodriguez in the third round of their four-round junior featherweight bout.

In the prior fight, Nelson Hampton had trouble in the final round, but survived Naseem Asad’s late charge to earn a unanimous decision, with all judges scoring the four-round lightweight contest 40-36.

Hampton dominated the first three rounds and assumed he could cruise in the last round. Asad capitalized on Hampton’s mistake and had him hurt with a series of power shots. But Hampton quickly recovered and had Asad moving backwards for the final minute.

The opening bout of the card didn’t have a winner. Ricky Lopez and Joe Perez settled for a split draw after a back-and-forth 10-round featherweight battle.

The Garcia-Granados main card is scheduled to air on FOX and FOX Deportes at 8 p.m. ET/5 p.m., starting with Brandon Figueroa against Yonfrez Parejo for the interim WBA junior featherweight belt.

The second bout on the FOX tripleheader is the 10-round heavyweight bout between Andy Ruiz Jr. and Alexander Dimitrenko. After the main event the fights will continue on FS1, which will feature Karlos Balderas and Alfredo Angulo in separate bouts. 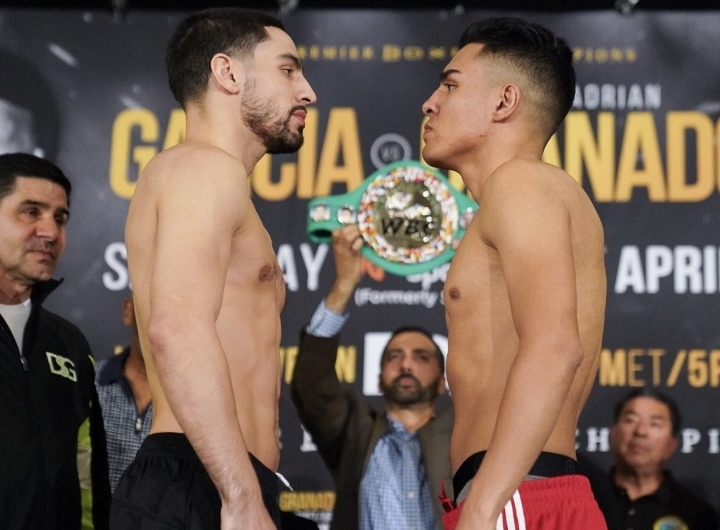