A night intended to test the mettle of Danielito Zorrilla provided him with an unexpected form of adversity, though one he would overcome in maintaining his perfect record.

The unbeaten super lightweight prospect delivered big at home, outpointing Mexico’s Jesus Pérez over 10 round Saturday evening in Coliseíto Pedrin Zorillia. Scores were 100-89 twice and 98-91 in favor of Zorrilla, who was forced to fight through a bruised knuckle on his right hand for nearly the entire fight.

“I had to adjust using mostly my left hand from the second round on,” Zorrilla (13-0, 10KOs) said of having to go 10 rounds for the first time in his young career. 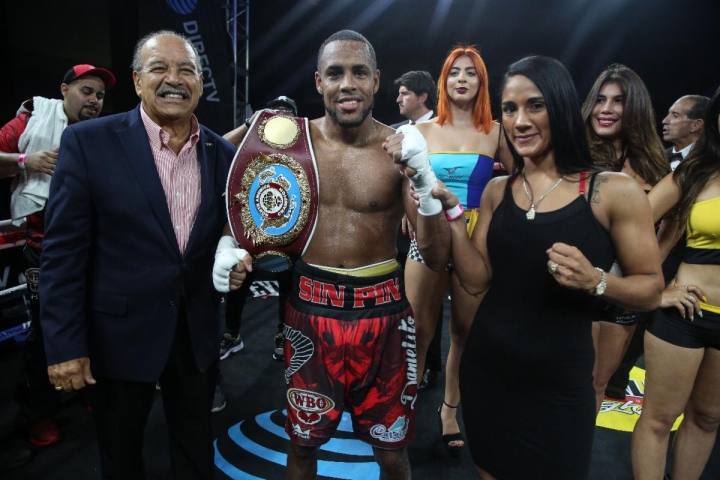 The irony in going deeper than he’s ever been as a pro as the fight threatened to become his quickest to date. The fighting pride of Rio Piedras, Puerto Rico—who is promoted by one of the island’s all-time greats, former four division champion Miguel Cotto—controlled the pace in the opening round, one that ended with Mexico’s Pérez (23-4, 18KOs) on the canvas courtesy of a clean right hand.

Pérez survived the second knockdown of his career, rising to his feet and somehow riding out a monstrous left hook that left him dazed shortly before the bell. The sequence brought a raucous cheer from the partisan crowd sensing another early night in Zorrilla’s ascension from prospect to contender.

Instead, he was forced to switch his game plan after essentially becoming a one-handed fighter upon impact.

From there, the power puncher became the boxer as Zorrilla put in some much needed rounds—even if the hard way. Pérez proved a durable foe, though unable to convert such toughness on the scorecards, taking just one round on one of the three official cards.

It wasn’t the way Zorrilla wanted to show his multi-dimensional arsenal, although the end result made it a worthwhile journey.

“It was a tough fight but I left the ring with my first championship (interim NABO super lightweight title), which was the goal,” notes Zorrilla. “We put in the work and I am pleased with my performance.”

The injury negates any chance—however slim it was to begin with—of squeezing in a fourth fight in 2019. The win, however, does put him in direct line for a crack at fellow unbeaten Boricua super lightweight Yomar Alamo, who fought to a 10-round draw with Mexico’s Antonio ‘Tono’ Moran one night earlier in Kissimmee, Fla.

Both bouts were part of the World Boxing Organization (WBO) Tournament of Champions, with the intention to match the two winners together in the first part of 2020. The draw verdict posed a problem in a tournament sense, although Alamo entered the fight as the reigning regional titlist, with Zorrilla’s win on Saturday making him the mandatory challenger to that very title.

“If we have the opportunity, we are willing to take on any challenge,” insists Zorrilla. “There are many big fights out there but we want to face anyone who is standing in our way.

“I just won this title and not giving it up any time soon. Also (regarding a potential fight with Alamo), you have to beat the best to be the best.”

The bout aired live on DirecTV in Puerto Rico.

[B][SIZE="3"]Daniel listen.. The reason there isn't any comments in this thread is because of your nickname Daniel "El Zorro" Zorrilla?! Fck iz that? Boy change ur sh[B]i[/B]t to Daniel "The Gorilla" Zorrilla and fire your team for letting u sleep…