Daniel Jacobs and Julio Cesar Chavez Jr. will clash in a Super-Middleweight showdown at the Talking Stick Resort Arena in Phoenix, Arizona on Friday December 20, live on DAZN in the US and on Sky Sports in the UK.

Jacobs (35-3 29 KOs) makes the move up to 168lbs following his Middleweight unification showdown with Canelo Alvarez in Las Vegas in May, putting his IBF crown on the line against the pound-for-pound Mexican king and WBC and WBA ruler who edged out Jacobs on the cards.

The two-time ruler at 160lbs will make the first steps to becoming a two-weight World champion in Phoenix and does so against Mexican fan-favorite Chavez Jr (51-3-1 33 KOs). It’s a special night for the former WBC 160lb champion Chavez Jr. as he takes on the ‘Miracle Man’ at the same venue his legendary father closed the curtain on his incredible career in 2005. 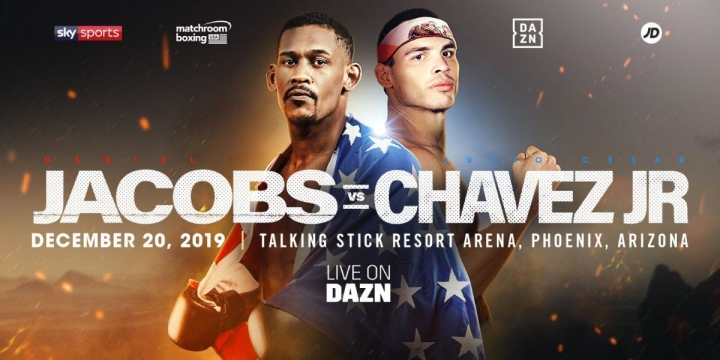 Chavez Jr. ruled the roost at Middleweight in at the turn of the decade with a record at 160lbs reading as a who’s who of the best at the weight in recent history. The 33 year old returned to action in August with a first round KO win in his 56th pro outing following his own clash with Canelo back in May 2017, and like Jacobs, he sees the Phoenix clash as the first step in adding World titles at 168lbs to his Middleweight crown.

“I’m delighted to announce this huge fight will close out an incredible 2019 for Matchroom Boxing USA and DAZN,” said promoter Eddie Hearn. “Daniel returns from his point defeat to Canelo to move up in weight on his quest to become a two-weight World champion. He faces a determined Julio Cesar Chavez Jr. who looks for redemption at the site of his father’s last ever professional fight. We expect a great fight, a huge crowd and a stacked card as we’ll look to close out the year in style.”

“As DAZN’s fight season continues, we are thrilled to bring boxing fans a huge super middleweight fight to close out the calendar year,” said Joseph Markowski, DAZN EVP, North America. “Both Daniel Jacobs and Julio Cesar Chavez, Jr. are in a position to prove themselves as title contenders on Dec. 20 and the winner will position themselves for a career-defining fight in 2020.”

I used to be a fan of Jacobs but it seems he's just trying to cash out now. His lackluster performance against Canelo was the tipping point for me. It seemed like he just wanted to be a contender for…

[QUOTE=The Smash;20177381]Credit to Jacons for stepping up, when so many others are scared to fight Julio. Chavez will be undisputed champion at 168lbs by the end of 2020. 54 have tried and 54 have failed. There is no blueprint.[/QUOTE] Lol…

Chavez has fought only once since his loss to Canelo in mid 2017. Not exactly a motivated guy, is he?

I will be in attendance! Juiced to have some real fights come to the valley