Daniel Jacobs nearly paid dearly for not fighting with any sense of urgency against Gabe Rosado on Friday night.

The former IBF and WBA middleweight champion didn’t deliver the punishing performance he promised against a trash-talking opponent who proved to Jacobs that he is better than Jacobs thought. Jacobs still managed to win a 12-round split decision in the main event of a five-fight card at Seminole Hard Rock Hotel & Casino in Hollywood, Florida.

An apologetic Jacobs admitted he treated what was widely viewed as fight he should’ve won convincingly as a sparring session.

“I didn’t think I did the best performance,” Jacobs told DAZN’s Chris Mannix. “I thought I coulda did a little bit better. Atmosphere was a little weird – no fans, nothing to really pump you up. But it’s my fault. We had a great camp and I obviously didn’t show everything that I needed to. And my corner was obviously instructing me from the corner. But I guess I was looking for shots to load up. I was looking for the right hand. I seen he was susceptible. Every time he would go down, I would land it right. So, I guess I got right-hand happy.

“But I shoulda formulated the game plan and stuck to it. But I live to see another day. I got a split decision. I mean, he’s a game opponent. I didn’t think it was that close, by far. But at the same time, I guess me being a little stagnant makes the judges give this sort of decision.”

According to CompuBox’s unofficial punch stats, Jacobs and Rosado landed exactly the same amount of punches. CompuBox counted 78-of-339 overall punches for Jacobs and 78-of-549 for Rosado.

“Yo, I felt I won the fight,” Rosado told Mannix. “I mean, I surprised him. I out-boxed him, I out-jabbed him, I countered him, I made him miss big shots. I mean, like even when they said the decision, he was disappointed I walk with my hands up. Like, he had the look on his face of defeat. That man didn’t do nothing to me. He put more hands on Canelo and Triple-G than he did me.

“I out-boxed him. I caught him off guard. I thought we boxed a great fight, jabbing up and down. You know what I mean? Made him miss big shots, hit him with big shots. It’s like – it was crazy. I mean, they said, ‘From Philadelphia,’ I raised my hands up. Then, the next thing you know, I mean, he was surprised. He was surprised. He was as surprised as I was.” 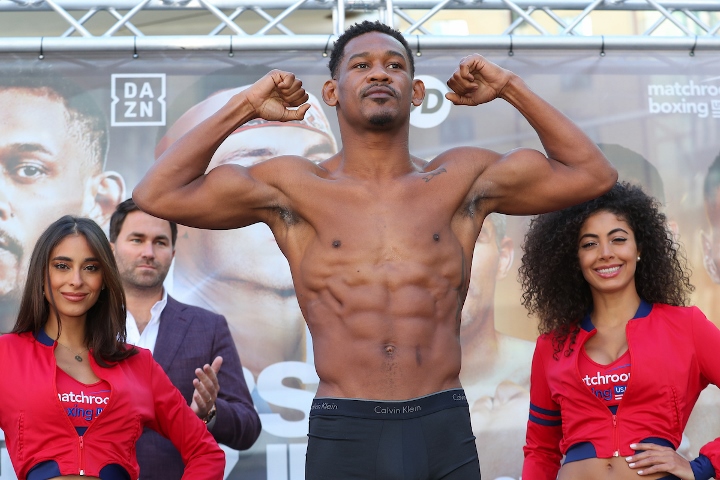 A defeat Friday night would’ve cost Jacobs a seven-figure payday in his next fight.

The 33-year-old Jacobs hopes his win Friday night, albeit unimpressive, leads to a super middleweight world title shot in his first fight of 2021, either against WBO champ Billy Joe Saunders or IBF champ Caleb Plant. He also would like to battle WBC middleweight champ Jermall Charlo, though that bout likely would have to be contested at a catch weight between middleweight and super middleweight because Jacobs probably wouldn’t agree to fight at 160 pounds again.

Jacobs felt fresher at the super middleweight limit of 168 pounds Friday night, yet his fight versus Rosado seemed to hang in the balance entering the final round. You wouldn’t have known it by Jacobs’ uninspiring approach.

Rosado landed a right under a little more than minute into the 12th round that made Jacobs move away from him. Just after the midway mark of the last round, Jacobs connected with a left hook.

After a 10th round in which neither fighter really landed a punishing punch, Jacobs didn’t fight during the 11th round with a sense of urgency it seemed he need at that point in the fight. Rosado drilled Jacobs with a straight right hand when there were about 30 seconds to go in that 11th round.

Rosado landed a short, right hand on the inside late in the ninth round. That shot didn’t affect Jacobs, but it was the most noteworthy punch landed in those three minutes.

Rosado caught Jacobs with a jab and then a right to the side of his head with about a minute remaining in the eighth round. Jacobs switched to a southpaw stance late in the eighth round, but he didn’t accomplish much fighting out of it.

Jacobs was more aggressive in the sixth round than the fifth and went after Rosado’s body. Jacobs caught Rosado with a short, left hook up top that made Rosado smile just before the sixth round ended.

Rosado’s hard jab landed a few seconds before the end of a mostly uneventful fifth round. Rosado started showboating after landing that shot.

Jacobs snuck a straight right through Rosado’s guard about a minute into the fourth round. About 30 seconds later, he hit Rosado with a left hook.

Jacobs’ right hand landed on the top of Rosado’s head with about 25 seconds left in the fourth round.

Rosado’s stiff jab caught Jacobs with about 50 seconds to go in the third round. Jacobs grazed Rosado with an overhand right several seconds before that third round concluded.

Jacobs also clipped Rosado with a left hook as Rosado moved forward early in the second round.

Rosado was the more active, aggressive fighter during a largely tactical first round for both boxers.