In only one round did either of the fighters, Daniel Jacobs and Gabe Rosado, land in double digits. (Rosado landed 10 punches in the 8th round.) The final stats had both fighters landing exactly 78 punches over 12 rounds.

Jacobs landed 22 jabs to Rosado’s 23, and Jacobs landed 56 power shots to Rosado’s 55. Rosado threw 549 punches to Jacob’s 339 punches. With not much to choose from, the judges awarded Jacobs a split decision. 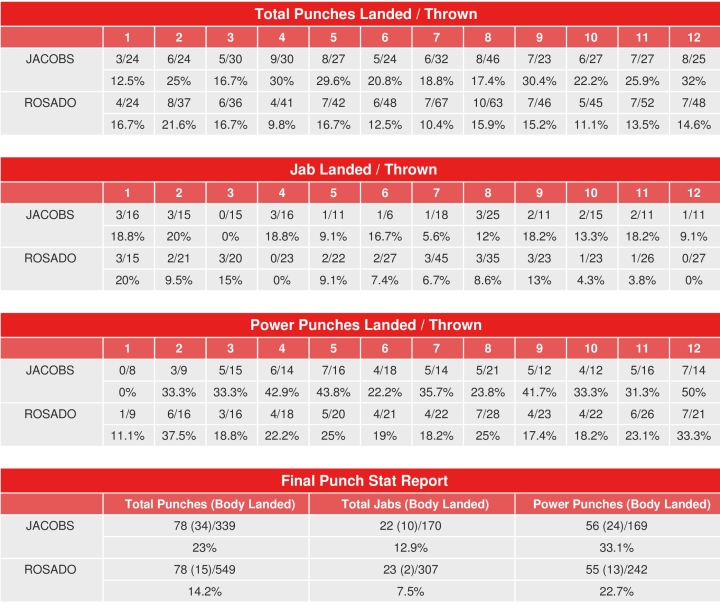 They were trading punches in the first round, with Indongo going down from an accurate counter shot. Yaleussinov went in to follow up and Indongo was able to fight him off. Yaleussinov went back on the attack to force Indongo to hold on.

In the second round, a combination of punches sent Indongo down for a second time. Indongo got up, he was hurt, and indicated to the referee that he was done - with the contest being waved off.

A very calculated fight in the first round, with each boxer picking his spots. There wasn't that much coming from Jacobs. In the second, Jacobs began to pick up the pace.

For the next few rounds, Jacobs was controlling the fight for the most part, with Rosado making it competitive as neither boxer was running away with the bout and not a lot was connecting for both men. Jacobs landed several hard punches in the seventh, but there still wasn't a lot being landed by either man. Rosado had the edge in the eight, with more of the landed shots.

Rosado continued to rally in the ninth, as he was countering well when Jacobs would come forward with shots. Jacobs edged a close tenth with the better punches. Rosado seemed to have a better eleventh, which was also close. The twelfth was also close, with Jacobs seeming to shave it with a few punches.

After that fight maybe one of those Brits will "step up"

Gabe definitely didn't get credit for like 10-15 punches he landed more . He threw over 200 more punches and your going to tell me he didn't land more?

Plsin & simple, looking at the fight & now the punch count, it's clear that Rosado outworked Jacobs