Dubois took a knee in the tenth round of the fight for the British, Commonwealth and European titles after taking a left jab directly on the eye, which was swollen shut.

It has now been revealed that he suffered “left medial and orbital floor fractures”, as well as retinal bleeding, which could have been career ending if the fight had continued. 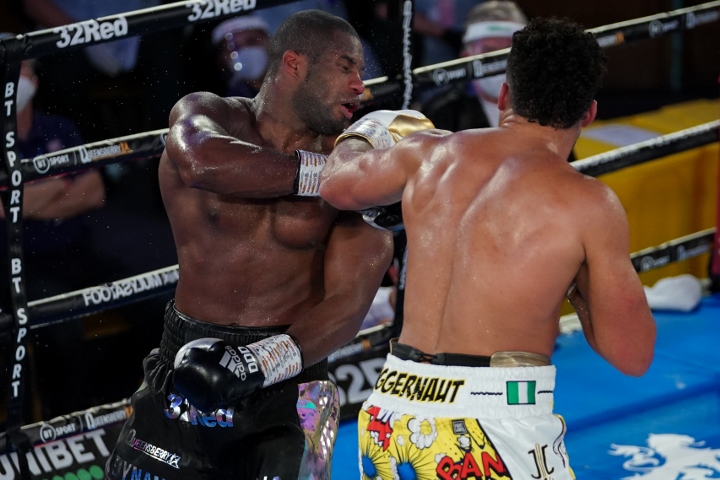 A decision on surgery has not yet been taken as doctors want to see if the injuries will heal without intervention.

The section of her notes say: “I have explained to Mr Dubois that it was fortunate that the fight was stopped when he sustained the fracture, otherwise there was a risk that further trauma could have caused more orbital tissues and the extra ocular muscles, that move the eyeball, to be entrapped into the fracture fragments and cause potentially career ending double vision.

“When the periocular swelling settles there is a risk of him developing enopthalmos (backward displacement of the eyeball due to the enlarged orbital space caused by the fracture). Orbital fracture surgery can be undertaken to address the volume change.”

A statement from Queensberry Promotions said: “We will continue to work with Daniel’s team and his medical staff to ensure a successful rehabilitation. We thank the medical team for their diligent work thus far.”

[QUOTE=Rodbox;20930338]Dubois’s quitting was calculated he took the knee looked at the ref and waited to be counted out a very cowardly episode.[/QUOTE] STFU Hotrod. You are just another clueless troll keyboard warrior who would never have the stones to even…

[QUOTE=Kezzer;20933159]He still quit, I’m not dismissing what a doctor said 5 days after the event at all. He quit the fight, anyone and everyone knows that. Whether it’s acceptable to quit, or at what point - is a different question.…

[QUOTE=Eff Pandas;20931319]LOL everyone is Evel fooking Knievel on the internet. I got no reason not to believe what these medical folks are saying. And it seemed obvious he had some sort of eye issue so I won't assume Frankie is…

That's why I won't be quick to jump all over any fighter who knows when it's time to pull himself out. They know what's happening in there, and what risk they're taking. I remember reading a Brook interview and him…

[QUOTE=Ray*;20930355]Imagine if Joyce had landed right hands!!! Shows you how big these guys are and how tough Dubois is, the pain must have been unbearable but he still continued getting touched on the eye. No way he goes another 9…