Daniel Dubois had a ridiculously easy night as Ricardo Snijders hit the floor four times in 200 seconds of action in their heavyweight clash at the BT Sports Studios in London.

The fight was supposed to get Dubois ready for a scheduled contest with Joe Joyce in October, but Dubois, the British heavyweight title, probably worked harder in his warm-up in the dressing room then he had to do to get rid of the Dutchman, who had been brought in as a replacement for former German amateur Erik Pfeiffer. 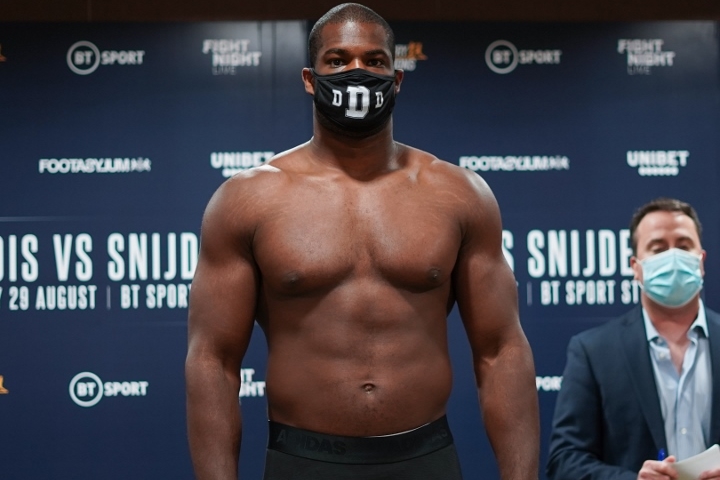 Snijders looked intimidated from the opening bell and failed to land a worthwhile punch.

“I was just getting warmed up, I was excited to be out there again and, hopefully, next time I will have a proper fighter in there with me, Joe Joyce or whoever is next,” Dubois said. “I needed a fight, any fight really. This was perfect, just getting in and out and I enjoyed.

“I can’t wait to get it on with Joe. I really want that fight. Just a big name next. Anyone will do.

“That’s the next step for me. I need a step up. I’ve won the British and now I need to climb on ever further on trajectory to the world title.”

Snijders looked tiny in front of Dubois, He backed away from Dubois, who took the first two minutes to size him up. The first menacing punch that Dubois threw, a left hook to the body, put Snijders over for the first time. He beat Marcus McDonnell’s count, but was over again straight after, sinking down under another body shot, as he complained he was pushed down.

Dubois then opened up with both hands and Snijders was sent to the floor for a third time, by a left and right hook. The bell then sounded to prolong the fight.

It only took eight seconds of the second round for Snijders to go over again. The rest of the time was taken up by an eight-count and McDonnell waving it off.

“We have got it scheduled for October 24 at the O2 and we just have to wait to see what happens and whether we get a live crowd in there or not,” Warren said. “Hopefully, we will get to know about that in the next week or so.

“It’s not something we want to do behind closed doors, it needs a live audience, but having said that, we don’t know what is going to happen over the next six months regarding sport and live audiences. In the meantime, we have to keep the sport going, we have to keep the fighters on. We want to get the two guys in the ring and see who is the best.

“It will come from the Government. Once the Government gives the green light, we will do what we need to do to make it happen. If there is a problem and we can’t get a live gate there, bums on seats, obviously we have to make a commercial decision about what to do.”

In the final fight on the Queensberry Promotions card, Kent lightweight Sam Noakes recorded his fourth successive win with a fifth-round stoppage of Jordan Ellison in a scheduled six-rounder.

Ellison was competitive for three and a half rounds, until a right to the body, followed by another right to the head dropped Ellison in the fourth round. From then, Ellison started to take heavy shots and in the fifth round, after Noakes knocked him down on the ropes with a right uppercut, referee Michael Alexander waved it off. The time was 1:28 of the fifth.

Next time I want to see a fight like this...I'll do a British accent and slap the shyt out of the cashier at the Hostess outlet store

[QUOTE=Angeljuice;20735219]Old fish eyes never fails to disappoint. Why bother having a "tune up" fight with a plank? To line Warren's pockets? Watch out for the "bait and switch" on the DDD v Joyce front too...............last minute Joyce will pull out…

I looked this Snijders guy up and he is ranked 173th in the world! Even Tyson Fury couldn't get away with that. Why is Dubois saying he would knock Whyte out (who is at least top-6) and then he goes…

Warren has barely delivered a worthwhile fight in 2020 while much of Fight Camp was great entertainment. This was just embarrassing.

Everything Warren does is embarrassing ....you had fight camp with great entertainment from fast Eddie and sky and you had absolute ****e from ****les eyes warren and BT......Even fury’s suit was more entertaining than the fights last night