Dana White: Floyd Mayweather "Wants To Fight; We're Going To Do Something"

At the age of 43, recently minted Fighter of the Decade Floyd Mayweather Jr. is still entertaining the idea of stepping inside the squared circle in all corners of the world — and against all comers.

UFC president Dana White is bullish regarding Mayweather Jr.’s future as a fighter.

“Floyd wants to fight,” White told Kevin Iole of Yahoo! Sports in an Instagram Live interview on Wednesday. “He wants to fight. We’re going to probably ... listen, I’m dealing with all the (expletive) that’s going on with 2020 right now. Floyd and I want to work together. We want to do something. We’re going to do something. I just need a little more time to get my (expletive) together.”

Mayweather Jr. has maintained close conversations and hinted at a reunion of some sorts with White since last year.

He’s also recently reengaged in conversations with Japanese fighting promotion Rizin for another exhibition match, much like he did the last time he was involved in any kind of bout on New Year’s Eve 2018 when he toyed, thwacked and scored a TKO over Japanese kickboxer Tenshin Nasukawa in a one-round Rizin exhibition match. 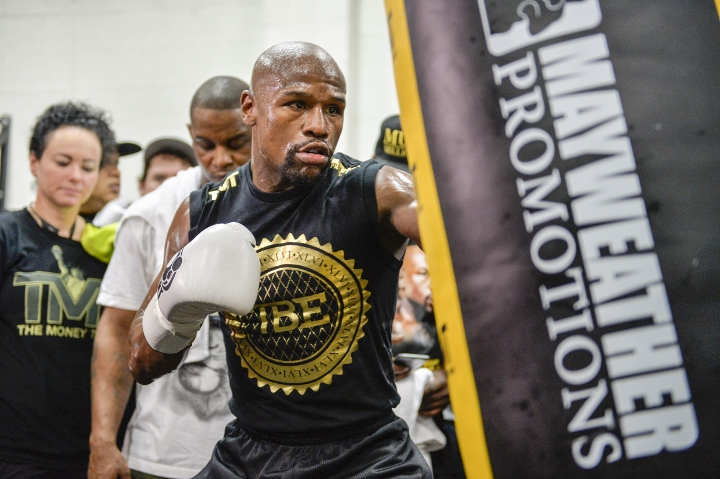 Mayweather Jr., meanwhile, did not close the door on yet another encounter with McGregor, the former UFC champion he decisively beat via ninth-round TKO.

“For now, I'm happily retired. You never know, but it would have to be worth it,” Mayweather Jr. told Forbes last month while discussing a potential sequel. “Just like gambling right? Juice worth the squeeze no matter who the opponent is.”

In January, days before McGregor was set to return for a UFC bout, Mayweather posted a since-deleted mock poster on social media hinting to a rematch in 2020 with the mixed martial artist.

Although Mayweather Jr. (50-0, 27 KOs) was noncommittal regarding a comeback, he spoke with conviction to say that he’d never fight in a cage.

“No [I won’t compete in MMA]. I think just like how winning teams receive a home-field advantage in the playoffs … you don't fix what isn't broken, and my record isn't broken.”

As for Mayweather Jr.’s Eastern exploits, Rizin president Nobuyuki Sakakibara is reportedly looking to pair Money May with Takashi Uchiyama, a 40-year-old retired boxer and former WBA super featherweight champion from 2010 to 2016.

“We’re working on some things right now for Tokyo, whether 2020 or 2021,” said Mayweather Jr. without offering more detail.

In an interview last month with BoxingScene.com, Mayweather Promotions CEO Leonard Ellerbe shared some intel about the fighter's future.

“No comment as of yet. When and if I have something to talk about, we’ll let you know. I’m not disputing or refuting any of the reports, I want to be clear on that,” Ellerbe said in regard to Mayweather Jr.’s negotiations with Rizin.

“But to be honest, there is nothing to write about [yet], unless it comes from Floyd Mayweather, and that’s what it is. I can’t comment on something that didn’t come from him. When the time is right, he’ll speak on that. If there is an announcement to be made, it will come from Floyd Mayweather. Floyd will let us know, if anything happens. He’s the boss.

“Floyd is a businessman and has a number of relationships with a number of international moguls,” said Ellerbe. “He is a superstar, and can do anything he wants to business-wise around the world if it makes sense. He’s built these relationships over the last quarter-century. He’ll make the right decisions, consult his team and go from there. The beauty of being a global superstar like Floyd is that he has countless options based on if he chooses to do something.”

[QUOTE=Bautizzle;20726471]Hahahaha you got that right MANNY is king and FROID is his little *****[/QUOTE] Manny Pacquiao is everything Fraud wishes he can be and pretends to be. Fraud's envy and jealousy of Pacquiao expose this truth and Fraud's insecurity.

[QUOTE=Bautizzle;20726470]How does FROIDS dick taste little *****[/QUOTE] ———— Maybe you can tell us because that’s what Filipino trannies like you are into. The Philippines lead the world in trannies and gays. That’s a fact.

[QUOTE=Monzon99;20705821]Floyd crying like a coward bi7ch fraud pretender, only a fraud coward would cry like that in public while mumbling excuses for ducking the best. Floyd was a total coward fraud but you can't handle that ugly truth.[/QUOTE] Hahahaha you…

[QUOTE=Oregonian;20705576]———- I just wasted 10 minutes of my life watching edited propaganda. See, I can send you YouTube clips of Cotto’s team actually saying they weren’t ready to fight Floyd when Floyd moved up to 140. There’s tons of videos…

[QUOTE=abracada;20705907]Fight Nate Diaz, the promos will be so worth it![/QUOTE] Yeah that actually makes the most sense for everybody in terms of risk reward. Nate can take an L without any consequences, UFC doesn't hurt one of their stars, everone…