For nearly 20 years I have been privileged to hold a vote for the International Boxing Hall of Fame and year in and year out I look forward to receiving the ballots each fall -- and dread it at the same time.

It’s an honor to vote but also a thankless task because there are usually more worthy candidates than electors are allowed to vote for. So, I do the best I can. I take it seriously, do my homework and also go by my own decades of experience covering boxing and knowing most of the folks I vote for.

My ballots are now in the mail and, like everyone else, I’ll wait for the new class to be announced in December with inductions scheduled for June 13 (which will also include the class of 2019 due to a coronavirus pandemic-induced delay) at the Canastota, New York, museum.

The modern men’s ballot obviously gets the most attention. It contains 42 names this year and is for boxers who had their final bout no earlier than 1989.

Fighters are eligible to appear after three years in retirement, which was changed last year from five years, which I didn’t agree with. Voters can select as many as five candidates. The top three vote-getters will be elected as well as anyone who receives at least 80 percent of the roughly 200 votes. 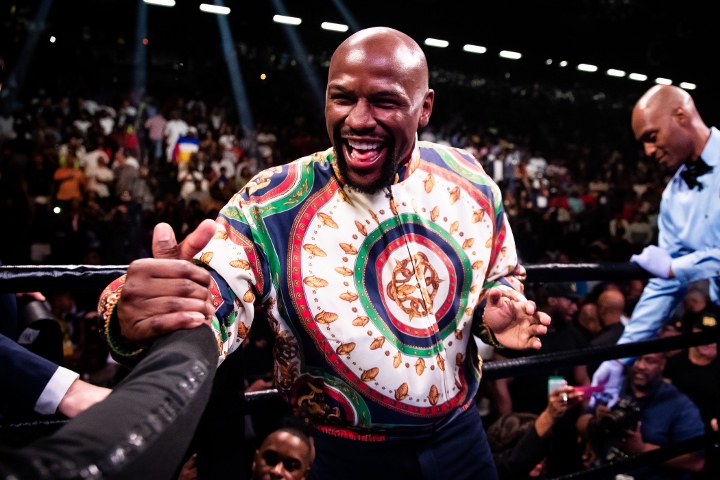 This year’s ballot was easy for my first four votes, which went to four of the five first-time eligible men, all of whom I covered extensively. I know how great they are.

-- Floyd Mayweather (50-0, 27 KOs), the longtime pound-for-pound king and five-division champion, who won titles at junior lightweight, lightweight, junior welterweight, welterweight and junior middleweight. He is one of the best defensive fighters ever and was the best fighter and biggest star of his era. Not voting for Mayweather, also a 1996 Olympic bronze medalist, would be malpractice by any voter.

-- Miguel Cotto (41-6, 33 KOs), a 2000 Olympian, is the only Puerto Rican male boxer to win world titles in four divisions (junior welterweight, welterweight, junior middleweight and middleweight). He fought a who’s who of top opposition, became a major star and made great fights. He’s also a no-brainer.

My fifth pick was more complicated. I didn’t vote for first-time eligible James Toney (77-10-3, 47 KOs), a pound-for-pound top fighter during the 1990s, who won titles at middleweight, super middleweight and cruiserweight. He belongs in the HOF but I didn’t check his name because he failed multiple tests for performance-enhancing drugs, including one that cost him a heavyweight title. He’ll probably get in this year but not with my vote. If he doesn’t get in I’ll vote for him in the future but being elected on the first ballot carries prestige that he doesn’t deserve because of his PED use.

Many of them I believe should be elected and I hope to vote for them in the future. Some I’ve previously voted for but this year’s group of newcomers was so strong I couldn’t. In the past I’ve voted for Calderon (defensive wizard and greatest strawweight ever not named Ricardo Lopez or Roman "Chocolatito" Gonzalez); Rafael Marquez (longtime bantamweight champion and younger brother of Juan Manuel Marquez, who was elected last year); Vazquez Sr. (titles in three divisions and one of Puerto Rico's all-time best); Michalczewski (two-division titlist, 48 consecutive wins to start his career, 23 light heavyweight defenses) and Hernandez (the late longtime junior lightweight titlist).

There are also others I considered, including a trio of British greats: Benn, Eubank and Hatton. All three deserve to make it.

I took long looks at Arce (titles in four divisions from junior flyweight to junior featherweight and one of the most exciting fighters of his generation); Bungu (one of South Africa's all-time best, 13 junior featherweight defenses); Casamayor (titles in two divisions, Olympic gold medalist, 2-1 in trilogy with Corrales); Corrales (two-division titlist, all-time great puncher, winner of perhaps the greatest fight in history against Jose Luis Castillo).

Ultimately, my fifth pick came down to Bradley or Froch. I agonized. Trust me. Ask my wife.

Bradley (33-2-1, 13 KOs), a former welterweight and junior welterweight titlist, had about a dozen high-level wins and I’m not even counting the official victory against Manny Pacquiao in their first fight, which was one of the worst decisions ever. Even without that win, Bradley beat Juan Manuel Marquez in a great performance, went to war and beat Ruslan Provodnikov in the sensational 2013 fight of the year, knocked out Casamayor (granted, a faded version), unified at 140 pounds against Devon Alexander and Kendall Holt, easily outpointed the prime undefeated Lamont Peterson and won his first title on the road in England against Junior Witter. His only official losses were to Pacquiao in their second and third fights.

England’s Froch (33-2, 24 KOs), the superb former three-time super middleweight titlist, also belongs in. From 2008 until his retirement in 2014, a stretch of 12 fights (in which he went 10-2), he faced top opponents in 11 of them. He beat George Groves (twice), Kessler, Lucian Bute, Glen Johnson, Arthur Abraham, Andre Dirrell, Jermain Taylor and Jean Pascal. His only losses were to Kessler (avenged in a unification bout) and Ward in the Super Six final.
When it came time to mark my fifth vote I went with Bradley, who I also voted for last year. I’ll definitely vote for Froch as soon as the logjam eases.

The women's category had 12 candidates. Electors can vote for three and the top two will be elected. I voted for Laila Ali (24-0, 21 KOs), the daughter of Muhammad Ali, who I voted for last year though she shockingly fell short, and Ann Wolfe (24-1, 16 KOs). They won various titles in the 2000s and were rivals but never fought despite being the dominant women of their time.

From the 40-man ballot, electors can vote for up to five and one is elected. This category is for fighters whose last bout was no earlier than 1948 and no later than 1988. I voted for two:

-- The late Rodrigo Valdez (63-8-2, 43 KOs), the former undisputed middleweight champion and one of the best ever from Colombia. Fighting from 1963 to 1980, Valdez was big puncher best known for his rivalry with HOFer Carlos Monzon, who edged him in a pair of title fights.

From the 29-person ballot, electors can vote for up to five and the top three will be elected. This is always a tough category because it covers so many different roles in the sport. It was difficult not voting for, among others, trainer/cutman Miguel Diaz, trainer Abel Sanchez, legendary German trainers Fritz Sdunek and Ulli Wegner; judge Dave Moretti, ring announcer Chuck Hull and WBO president Paco Valcarcel. I considered each and can see voting for them eventually.
With my five picks I went with:

-- Top Rank matchmaker Brad "Abdul" Goodman, who I voted for last year and who in my view is the best in the sport currently. He’s been critical in the development of more than 50 world titleholders over 20 years at Top Rank, including Teofimo Lopez, Shakur Stevenson, Cotto, Kelly Pavlik, Calderon, Mikey Garcia, Terence Crawford, Vasiliy Lomachenko, Brandon Rios, Mike Alvarado and Juan Manuel Lopez, to name just a few.

-- Publicist Bill Caplan, who has worked in boxing since 1962, when he handled PR for promotions put on by his boyhood idol, former heavyweight champion Joe Louis. Through the years Caplan has served as a publicist for George Foreman, Oscar De La Hoya and the WBC and done PR for Top Rank and Golden Boy, whom he still works with.

-- Dr. Margaret Goodman, who distinguished herself for many years as a Nevada ringside physician, before excelling in her current role as president of the Voluntary Anti-Doping Association, which is easily the gold standard for drug testing in boxing.

-- Sampson Lewkowicz, who has had various roles in boxing for decades, including matchmaker and promoter, but the Uruguay native belongs in the HOF because he’s one of the great scouts and talent evaluators. He excels at finding hidden gems. He was integral in bringing a former flyweight world champion unknown outside of the Philippines to the United States by the name of Manny Pacquiao. He also unearthed Sergio Martinez from obscurity in Argentina and guided him to junior middleweight and middleweight world titles and stardom in the United States.

From the 24-person ballot, electors can vote for up to five and the top two are elected. This is also a brutally tough category with many worthy candidates, but I went with:

-- Seth Abraham, who ran HBO Sports when it was truly the "network of champions" in the 1980s and 1990s. He was integral in the making many of the biggest fights of those times, the two Lennox Lewis-Evander Holyfield fights and Felix Trinidad-De La Hoya showdown for example. He also developed three executives who worked under him and became superstars in their own right: Lou DiBella (elected last year), Ross Greenburg (on this year’s ballot for the first time) and Mark Taffet (who belongs on a future ballot).

-- CompuBox co-founder Bob Canobbio, whose company, established in 1985, revolutionized how people watch boxing by offering punch statistics for each bout. CompuBox stats have become part of the fabric of the sport.

-- Jay Larkin, the late longtime first head of Showtime's boxing franchise, who spent 22 years with the network. He was trained in theater but became well versed in boxing and during his run Showtime emerged as a challenger to HBO's boxing dominance by televising many big events, including numerous fights involving Mike Tyson, Holyfield and Julio Cesar Chavez.

--  Broadcaster Tim Ryan, the outstanding blow-by-blow man for fights on CBS during the 1970s and 1980s. Many of my earliest boxing memories are of listening to him and partner Gil Clancy calling fights on Saturday afternoons.

-- Journalist Ron Borges, who wrote about boxing for decades for the Boston Globe and then Boston Herald. He’s one of the best ever and has a boatload of awards to prove it.

I'll never understand why they don't just let fellow hall of famers vote instead of some fat ass writer who probably wouldn't last 3 minutes on a heavy bag at any point in his life.

Andre Dirrell was robbed against Froch. Cheater should have another loss.

First, almost everyone uses performance enhancing in boxing and all other sports, some just don’t get caught. Second, I think it’s a good measure to go by the number of “OFFICIAL” wins against current HOF’ers or future HOF’ers AND titles…

[QUOTE=GhostofDempsey;20840247]I have no problem with his list.[/QUOTE] you're probably as as fat as this lazy c%unt tbh