Dan Goossen went to Chicago to see a fight. He ended up finding a career.

Isn’t that how it always goes in the crazy business of boxing? Dan’s brother Joe already knew that he was all-in, and that’s why he was in the Windy City on a summer night in 1980, cornering his buddy, welterweight contender Randy Shields, for a fight against Luis “KO” Mateo.

Dan, like the rest of the Goossen clan, was a big boxing fan, and he tagged along to watch their family friend win a unanimous decision over Mateo. Over the course of the evening, though, a dispute broke out between Shields’ father Sonny and Top Rank Vice President Akbar Muhammad.

“It was me, Dan and Randy outside the office,” recalled Joe Goossen. “Everyone knew what a great businessman Dan was, so Sonny comes out and says, ‘I can’t make an agreement. Dan, can you go in there and see what you can do?’”

The 29-year-old Goossen was already a successful businessman and had nothing to do with Shields’ career or the sport itself other than enjoying watching it. He agreed to talk to Muhammad.

“Dan goes in there and literally under five minutes they come out with their arms around each other, laughing like they’re best friends – which they became,” said Joe. “Dan solved the problem, everybody’s happy – and me, Akbar and Dan go out that night in Chicago, limo style.”

Once back home in Southern California, it was clear that Goossen was more than smitten with the business side of the sport, and soon after, the family started Ten Goose Boxing (named for the ten Goossen siblings). Just like that, the career of one of boxing’s greatest promoters began. Some would say Goossen was the last great promoter, something his longtime matchmaker (and brother-in-law) wouldn’t disagree with.

“(Bob) Arum and (Don) King have left their mark, there’s no doubt about it,” said Tom Brown. “Dan always gave them their props, also. But the last guy to really be thinking outside the box and trying crazy things was Dan. He was always willing to try anything.”

Having Hector Camacho Jr. ride into the ring on a camel is just one example. Another thing that was crazy for the time was Goossen’s willingness to embrace the internet while other promoters treated it as a fad. So when a big name like James Toney was fighting, the two would work the phones tirelessly. Internet reporters didn’t forget things like that, so when Goossen also asked for a little cyber-ink on folks like ring announcer Amy Hayes or prospect Malcolm Tann, how could anyone say no?

“That was his forte, that was what he was so good at,” said Brown. “He was always thinking way down the road. And he was such a great salesman.” 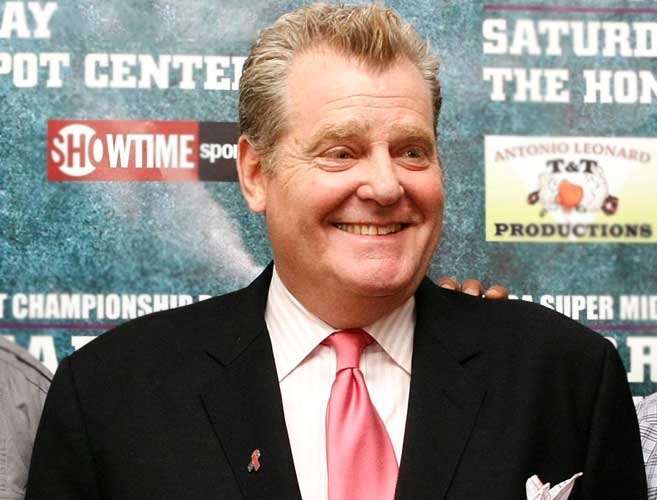 That’s the promoter’s job, but many have gotten lazy over the years, opting to let technology and social media do the work for them. That was never Goossen’s style, and it was all rooted in his upbringing.

“There was certainly no ivory tower involved,” said Joe Goossen. “My dad was a homicide detective and my mom took care of ten kids. They’re great parents, they gave us a great education, all ten of us, and my dad was very attentive to doing the right thing. So we learned to be respectful. But he (Dan) could have done anything, he really could have.”

He chose boxing, and for over three decades, it was his work and his passion.

Yet on September 29, 2014, Goossen passed away of complications from liver cancer at the age of 64. Nearly five years after his untimely death, a grassroots campaign is underway to get Goossen inducted into the International Boxing Hall of Fame, and it’s an honor long overdue.

“It would be bittersweet,” said Brown. “But it’s earned, it’s deserved. He is a Hall of Famer and he should be in. The only sad thing is that he won’t be there to see it. It should have been done in his lifetime, honestly. He’s done so much for the sport.”

There is no exaggeration in that statement. In addition to his larger than life personality, forward thinking, ability to sell a fight, and work to get the Muhammad Ali Act passed, Goossen promoted some of the biggest names in the sport during his stints with Ten Goose, America Presents and Goossen-Tutor, including Mike Tyson, Floyd Mayweather, Bernard Hopkins, Terry Norris, David Reid, Paul Williams, Glen Johnson and Gabriel and Rafael Ruelas. There would be the inevitable breakups with the likes of Michael Nunn and Andre Ward, but more often than not, once Goossen was on a fighter’s side, he was there for the long haul.

“You signed with Dan, you were family,” said Brown. “That’s why it hurt him so bad when Nunn, at 35-0, left him. It crushed him. Dan considered him family. The same thing with the nonsense with Andre Ward. He put everything into you when he signed you and there was no phoniness there. He wasn’t just selling.”

No one knew this better than Rafael Ruelas, who first met the Goossens when he was 11 and he and Gabriel found their way to the gym. What followed was a stellar career that resulted in a world lightweight title and an eventual unification bout with Oscar De La Hoya.

“He was very dedicated to the sport of boxing,” said Ruelas of Goossen. “He was seeking to make boxing a better sport. He was looking for fighters that had potential that might develop into stars and he helped them to live a nice lifestyle.”

It was almost as if the Goossen and Ruelas families came up together in the sport. Goossen had success before the battling brothers came along, but this was different. This wasn’t signing an established fighter or resurrecting a fallen name. Dan and Joe Goossen were there from the ground floor, something not lost on Ruelas.

“They were good leaders,” he said. “They helped us and guided us. People can have a lot of talent, but if they don't develop it, they're gonna go down the drain. They told us to keep disciplined and dedicated and determined. Even when things get difficult, you have to see it from the perspective of an opportunity. You've got to find what's in there for you. Be patient. Before you know it, the time will be there. The title fight that we all seek will be here.”

Goossen never seemed to be the most patient type. Ruelas laughs.

“He did not seem that way, but he told us to listen to Joe, do what you've got to do and make sure you do the best that you can,” said Ruelas. “He said, ‘I'll do the best that I can and before you know it, things will happen.’ He told us you need patience.”

There would be no such patience with the career of 1996 U.S. Olympic gold medalist Reid, who had a world title by his 12th fight and was in with Felix Trinidad by his 15th. It wasn’t the usual path, but with a damaged left eyelid that got progressively worse, Goossen did his job in getting Reid the most money in the shortest time possible.

Goossen excelled in situations like this, but his greatest joy was in bringing fighters back from the proverbial dead.

“He loved those projects,” said Brown. “That’s him right there. Look what he did way back with Frankie Duarte after he had been off two years. Bringing a guy like that back, and then James Toney and Glen Johnson each became Fighter of the Year when everyone else had given up on them.”

Everyone knows the stories of Toney and Johnson. The story of Duarte, who was out for three years before coming back and earning Comeback of the Year honors from The Ring magazine in 1987, may not be as well-known.

“Frankie was involved with drugs and out of the ring for over three years,” said Brown. “Dan brought him back, at the Country Club of course, and then he got him in the Forum tournament and he won that, beating Jesus Salud. Then he got him a world title fight with Bernardo Pinango that he got screwed out of, but it was an amazing story.”

Maybe as amazing as Dan Goossen’s, because in a business where sniping is always taking place, it’s hard to find someone with a bad word to say about him. Did he have issues with folks over the years? Sure. But that was business, and once business was done, it was done.

“Dan and I might sit in the same office every day for a month and not talk because we were pissed off at each other,” said Brown. “Well, I shouldn’t say pissed off because Dan had a way of getting it off his chest and it was over with. Someone like me would carry it for a month. We’d have a knock down, drag out in his office and once he got it off his chest, he’d go out to dinner with you that night. He was that kind of guy.”

“I used to really admire the effort he’d put into everything,” added Joe Goossen. “He was really dedicated and hard working. But I was out on the road with him long enough to know that he was very engaging with everyone. He was raised that way and he presented himself that way. It was in his nature and he loved to have a good time. You should be able to have a good time, even when you’re working. He was very upbeat, very positive, loved to joke around. He was an amazing guy and we really enjoyed ourselves. We had a lot of fun along the way, met a lot of great people from top to bottom, and Dan always threw great after-fight parties as well.”

Goossen laughs before adding a final anecdote about one of his brother’s promoting rivals.

“He said, ‘Joe, Al Haymon is the smartest boxing man I ever met.’ I said, ‘I always thought you thought you were.’”

The two laughed. That was the relationship they had. Brothers. Just like Goossen and Brown, as well.

“Dan was just an amazing man, and it’s a good way to describe him as the last great promoter because he was always willing to try everything,” said Brown. “And he pulled it off.”

The only man to beat Andre Ward.

Goosen was a good promoter, but not a great one. Great is reserved for Jacobs, Arum, and King. Must have forgotten about the money spent at America Presents.

As much as I hate Bob Arum, the old fart still has put together some memorable fights. so no, Goosen wasn’t really the last Mohican.

[QUOTE=juandabomb;20051049]ungreatful ward ended up sueing mr.goosen..without him ward wouldn't have fought all his super six fights in the u.s.[/QUOTE] We would have to listen to Ward's side of the story. I'm sure he had his reasons, just like Michael Nunn…