This time last year, there was no way Damien Vazquez thought he was going to be in a world title fight in 12 months.

Owner of a 15-0 record and on the fast track heading into his March 2019 bout with Juan Carlos Payano, Vazquez lost the “0” on his record to the Dominican veteran that night in Carson, California, and five months later, got a head-scratching draw against 9-10-3 Josue Morales in Edinburg, Texas.

Just like that, 15-0 turned into 15-1-1, and while there’s usually no rhyme or reason to how the boxing world works, that type of run usually results in a long reset. But after a February stoppage of 70-fight journeyman Alejandro Moreno, Vazquez is now days away from a WBA junior featherweight title bout against Brandon Figueroa this Saturday in Connecticut.

“I didn’t expect for me to be at this point a year ago, but hey, here I am and the opportunity blessed itself with me and I’m gonna take full advantage of it,” said the 23-year-old Las Vegan, who never lost faith after his forgettable 2019 campaign.

“There were no doubts when that fight happened with that draw because I came back and looked at the tape and I believe I won the fight,” he said of the Morales fight, which most observers considered to be controversial at best, larcenous at worst. “If anything, I’d give him a round, maybe two at most. But I won the fight and I’ve gotta look at it like this: I fought in Texas and the dude’s from Texas.”

As for his first pro loss, Vazquez says, “I’m not the same fighter I was when I fought Payano. I lost to Payano, but like I told people before, I had a lot of personal issues going on outside the ring that affected me in the ring. I took care of all that and so now you’re gonna see the real Damien, the actual Damien.”

If he shows 12 rounds’ worth of his potential against the unbeaten Figueroa, that draw and loss won’t mean anything because he’ll have a world title belt around his waist. And he’s put in the time necessary to make sure the end result meets his talent.

“I’m taking it as another fight, but it’s one of the most important fights of my career, so I’m not allowing no slacking around or anything like that,” said Vazquez, who is also unbothered by the hype and media attention surrounding this weekend’s pay-per-view bout. “It wasn’t that hard for me this camp because me and my whole team, we were quarantined, so we were off to the gym, back home, go off to run, come back home. So I really didn’t have anybody up in my face or anything like that. And people being around, it doesn’t bother me. I know it’s part of the show. I grew up with it and got used to it.” 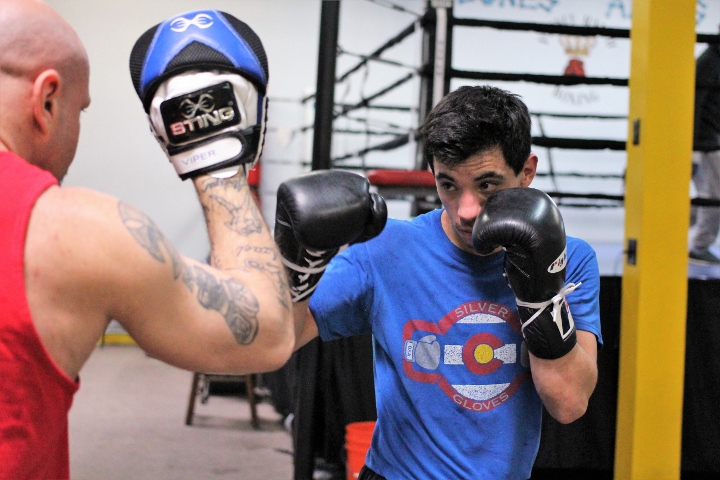 He’s not kidding, the son of Oscar, who has been in the business for decades, and the nephew of Mexican great Israel Vazquez, “Sugar” has boxing in his blood, and he’s been around it for much of his life.

“My dad used to box back in the 70s and I picked it up from him because he used to manage professional fighters,” Vazquez said. “And it was around the time he had Cruz Carbajal that I started getting into the gym. I was around four when I started going to the gym with them. I got my first pair of boxing shoes, first set of handwraps, first set of gloves and the rest is history. Now I’m here.”

Given that history, there’s no surprise that Vazquez has made it clear that he wants “a Mexican war” with Figueroa this weekend. And while he says he won’t chase something that’s not there with the Texan, he’s more than willing to bite down on his mouthpiece and throw down if that’s what it takes to win the belt.

If that is what ends up happening, it wouldn’t be a surprise to see the two 23-year-olds meet more than once in the coming years. Again, Vazquez is down for anything.

And the only day he’s thinking about is Saturday.

“I was the person asking for this fight and sure enough, it happened,” said Vazquez, who has also thought about what it will be like to go back home on Sunday with a belt in his hands.

“I got some jitters out of my system already,” he said. “And now I’m ready to go to war.”