You always do amazing breakdowns as far as providing cliff notes for a fighter's career and I was hoping you could do the same in honor of the late Pernell "Sweet Pea" Whitaker (R.I.P).  I was reviewing his career on Boxrec and I noticed that he and another late champion (Hector Camacho) somehow managed to never cross paths.  I figured you could provide additional context on that and the rest of Whitaker's hall of fame career.

Often times the praise that a fighter gets is misguided. I’ve seen it with many fighters but Whitaker is at the top of the list. The compliments that Whitaker receives is almost an insult to his real game. People call him a defensive wizard and a stick and mover. He was that but much more.

Pernell Whitaker was truly special. I’ve seen over half of his career fights live as they happened and he’s every bit as good as Ray Leonard, Roy Jones and Floyd Mayweather. He wasn't marketed the way they were, but skill for skill, accomplishment for accomplishment, eye ball test on best day he’s right there. A+ fighter. 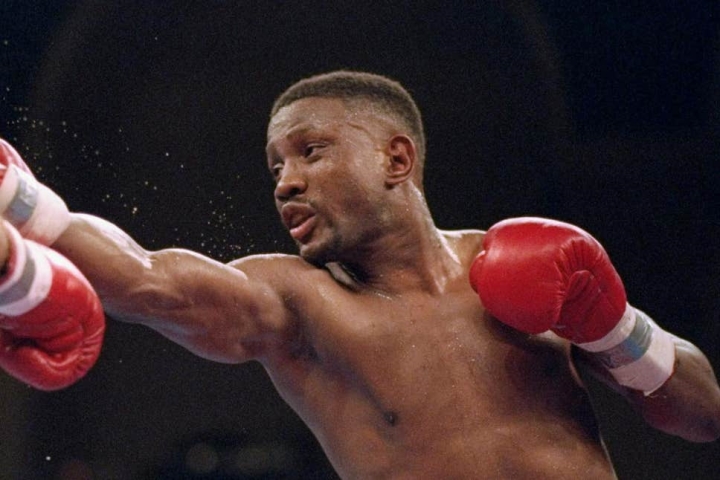 Meldric Taylor was the MAN!

I thought as the fight against Chavez went on Taylor should've boxed more instead of trying to show Chavez he was tougher.

That fight was life-changing for Taylor.

Taylor should've done some of the things Frankie Randall did.

True story, I watched the Chavez/Randall fight with several Hispanic guys and as the fight wore on and the drinks took effect those guys started to get mad at me for the whooping Randall was putting on Chavez to the point where they wanted to whoop me. I saw the writing on the wall and got the hell out of there.

Bread’s Response: Boxing is a tribal sport. I’ve seen many arguments and bar fights between people who are supporting the fighter they most identify with.

Randall fought Chavez AFTER Meldrick did. In 1994 that wasn’t the same guy that Meldrick got in 1990. That was literally almost 20 fights later.

Meldrick fought his fight. Meldrick was a fast handed, volume fighter who liked to work in close and the midrange. He was never going to have what you call a long career. No fighter with that style without a big punch has had a long career. He was always going to burn out by his early 30s. The Chavez fight accelerated that burn out. It’s just how things go sometimes. Randall was taller and longer and had a better jab and 1-2. They were different fighters who fought Chavez at different times.

I'd love to hear your thoughts on the prince, but after you've viewed some of his fights. You've been quite dismissive of him,

I remember first seeing the prince when he won the European title. He was18 & was fighting a very experienced 30 year old man who had challenged for the world title, Nas totally outclassed his opponent, drawing criticism from Reg Gutterige at ringside for showboating, but literally winning every round.

From then on Nas seemed capable of doing anything, including bizarre stuff you'd only ever heard of Sugar Ray Robinson doing. Nas did knock a guy out with a left uppercut whilst walking backwards!

Sadly he soon fell to earth. He liked fighting but didn't much like training & hated running. His camps were embroiled in ill feeling & rivalry & his  old trainer, Brendan Ingle, was forced to step aside. He was humiliated by Marco Antonio Barrera.

BUT, honestly, you would be shocked by just how good the best Nas was. Just on natural ability I've got him with Pernell, Evander & Sugar Ray. He just was insanely talented.

Bread’s Response: I’ve never been dismissive of Prince Naseem Hamed. I think he’s a great fighter and one of the best 20 featherweights ever. Could be bottom half of the top 10 if you pushed hard. He’s definitely among the top 5 punchers ever at featherweight. He was a brutal one punch ko artist. He only lost one fight to an ATG in Barrera. There is no shame in that. I also think the Prince may have peaked on the UK circuit even before he came over to the US and fought Kevin Kelly. Nevertheless he basically cleaned out an entire division and fought all of the sanctioning body champions at one time or the other. Great fighter.

I saw recent pictures of Joe Calzaghe. He looks like a powerlifter and cut, well over 200lbs.

So my question is, how does a fighter find his best weight?

Part if the answer will be, whats the competition like at possible classes or what pays most? but i would like to know where someone is really best without considering these, rather than relatively or comparatively competitive.

IMO Floyd was best at 140 but was so good it didnt matter that he went to 147 for paydays. Fair?

Peak Floyd vs. Peak Duran? You chose the weight. Indeed, would a change in weight classes mean a change in outcome?

Bread’s Response: A fighter’s first weight he turns pro at is usually the lowest weight he can get to without feeling weak. As he gets older he usually gains more mass on his walk around weight. But that doesn’t mean he has to move up. As you make more money, you can afford a better diet and resources. On the average fighters walk around about 2 weight divisions higher than they fight. For example a welterweight will walk around at middleweight or higher.

It’s no exact science because everyone’s composition is different.

Floyd only stayed at 140 for a quick second. But 147 worked out for him. I suppose he was equally as great at both weights. Floyd is unique he doesn’t rehydrate high in weight. But he is also a lean man. So maybe cutting weight wouldn’t be good for him. Maybe being able to eat a higher calorie diet than 99% of fighters is what made his stamina so great. We can’t over analyze this stuff.

Floyd vs Duran at their peaks. We can pick any weight between 135-147. Duran most likely would have made a terrific junior welterweight.  He just skipped the weight after he left lightweight in 1978. Floyd and Duran are roughly the same size. So let’s say the Duran who fought Leonard in the 1st fight and let’s say Floyd who fought Gatti. Floyd fought in the day before weigh in era, so the weights in this fight is a wash.

Duran’s skill set is underrated. He’s viewed as this mauler. But Duran is one of the best defensive fighters I’ve ever seen. He’s James Toney but better. Look close. His out fighting ability is also A+. Duran is as good as all around fighter as there ever was. He physical strength is rare. He did hand stands as a kid for pennies and it built his upper body strength. He had tactile reflexes like no other. He was even handed and brutal in his attack. He was indefatigable during certain points of his career.

Mayweather is also underrated in certain areas. We talk about his defense. But Floyd is an underrated infighter. He has a very dependable chin. His physical toughness is A+. He was the tougher man vs Shane Mosley and Zab Judah. Floyd also never gets tired. Floyd has a clutch gene where he knows how to fight the right fight on the right night. He always comes through and gives himself a chance to win 7 rounds clean.

On the very best night either has had. My eyes tell me Duran would grind out a decision. Duran vs Leonard in the first fight. Duran vs Palomino. Duran vs DeJesus in the 2nd and 3rd fights. Duran vs Hector Thompson. I just don’t know of a man close to his size that can keep him off of him. As great as Floyd was, he could be swarmed. Castillo held him close twice. Everyone remembers the controversial first fight but Floyd needed the last two rounds to win the rematch CLEAN. Rick Hatton, Emaneul Augustus and Marcos Maidana all had extended success swarming him. I can only imagine what Duran from the mid 70s-1980 could do. And on top of the swarming, Duran is more athletic and more skilled than the fighters I named

It wouldn’t be easy. Floyd is truly special. But in my opinion Duran beats more people head to head than any other fighter around that size.

What do you think of this weekend’s action? There seems to be a buffet of solid matches. Does anything stand out besides Thurman vs Pacman?

Bread’s Response: This is a really good weekend of action especially for July. A weekend this action packed usually happens later in the year.

I look forward to Pac vs Thurman but it’s hard for me to call this fight. The odds seem off to me. I love Pacman but he shouldn’t be the favorite over Keith Thurman who is 10 years younger, and about 15lbs naturally larger. The oddsmakers have been off all year. That being said maybe Thurman is not the same. I would have picked Thurman by decision but with all of the weird stuff going on, this fight has me confused. A draw or controversial ending is in order. The promotion of this fight has been excellent because no one seems to be able to pick a definitive winner.

I think Caleb Plant will put on a sensational performance and stop Mike Lee. Plant is too fast, accurate and smooth.

If Yori Ugas doesn’t have a let down, I like him to beat Omar Figueroa in a great fight.

I also think we may see an upset at heavyweight. Oscar Rivas is a live dog.

This shyt is old... when’s the new mailbag dropping?

[QUOTE=Shadoww702;19915038]Hamed was a DIRTY disgusting disrespectful boxer! He was worse than Broner x100! He actually tried hurting the other guy with dirty moves and glad JMM planted his ass fave 1st in the buckle. He ruined Augie Sanchez with the…

[QUOTE=Shadoww702;19915038]Hamed was a DIRTY disgusting disrespectful boxer! He was worse than Broner x100! He actually tried hurting the other guy with dirty moves and glad JMM planted his ass fave 1st in the buckle. He ruined Augie Sanchez with the…