Cunningham: I'm Prepared To Do Whatever To Get The Job Done

Steve Cunningham is one of boxing’s good guys. He always has been. But he’s also human, so it can irk him at times when a consistent theme in interviews is his age.

“I understand why they do it, but it gets on my nerves,” said the 41-year-old Philadelphian.  “People who see me in the gym and know my work ethic, it’s not problem to them. People who spar with me, they know. I’ve always lived boxing and training and staying in shape, so I was gonna say it gets old, no pun intended (Laughs), but I was hearing this when I was 35. As long as my trainer and my wife – who’s my manager – look at me and say I’m doing great and I’m not slowing up, then I’m cool.”

This Saturday, Cunningham will make the walk to the ring for the 39th time as a professional when he faces unbeaten Andrew Tabiti at T-Mobile Arena in Las Vegas. It’s Cunningham’s first time on Pay-Per-View and likely the first time he will be in an atmosphere quite like the one surrounding that night’s main event between Floyd Mayweather and Conor McGregor.

But don’t expect the veteran to be overwhelmed.

“I don’t get to enjoy the atmosphere unless it’s a win for me,” he laughs.

A two-time cruiserweight champion, Cunningham has paid his dues in that division as well as at heavyweight, yet his record has been spotty in recent years, as he’s only gone 1-2-1 since 2015. Yet with his name recognition and his willingness to get into a fistfight at a moment’s notice, he’s presumably the right opponent at the right time for the 27-year-old Tabiti. 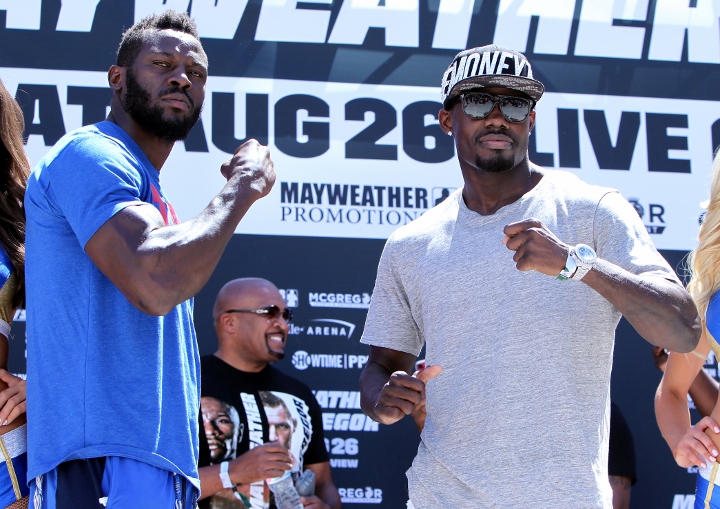 Cunningham is well aware that the odds are not in his favor – at least on paper – this weekend.

“This kid is trained by Mayweather’s dad, he’s on TMT, this is where he lives, but it’s just gonna be me and him in that ring, that’s it,” he said. “Everybody’s gonna be looking at me and him. I’m just fighting one guy. I’m not fighting the whole circus, I don’t have to fight the whole arena. The event is massive, but fight night, that’s all me.”

It’s not the first time he’s been in this situation. In a division where the top fighters have long hailed from Europe, Cunningham has been forced to take his show on the road, with seven of his bouts taking place overseas. That doesn’t mean he gets a break at home, though.

“Even here in America, even in my home state, Pennsylvania, I came home and fought Tomasz Adamek for the second time and I got robbed,” he said of his split decision loss to the Polish standout in 2012. “So even at home, I’m in hostile territory. So you’ve just got to fight accordingly.”

That means bringing the fight to his younger opponent, who is talented, but untested. That experience can pay big dividends in Vegas.

“I think in this fight it’s gonna have to play a big role in it,” Cunningham said. “He’s good, he’s skillful, you can’t look past his team, he’s got a legendary trainer in his corner and he’s been around those guys, so he’s gonna be in shape and he’s gonna be ready. But then you have the mental aspect and the knowledge I’ve gained from all these fights, and after fighting who I fought, that will come into play. So I’m gonna just have to force my will on him in different ways than just running at him. I’ll have to outsmart him, outwork him at times, out jab him, and we’re gonna have to work with that knowledge. All that experience is gonna play its part.”

If it does against Tabiti, who is currently ranked fourth in the world by the WBC, it could spell the beginning of a new title run for Cunningham, and that’s precisely the idea.

“Like before, I’m prepared to do whatever I need to do to get the job done, and the job is becoming a three-time world champ.”

When he dropped the giant roided gypsy it was a great moment.

Really good, hard-working guy. I remember his daughter had a heart valve problem I think. On the wrong end of way too many bad decisions.