Derrieck Cuevas is officially set for his first televised headliner.

The unbeaten welterweight prospect tops the July 12 summer season premiere of Boxeo Telemundo in a 10-round regional title fight versus Mexico’s Jesus Alberto Beltran live from Seminole Hard Rock Hotel and Casino in Hollywood, Fla. Both boxers easily made weight for the main event, with Cuevas (21-0-1, 14KOs) tipping the scales at 146.4 pounds, while Beltran (17-2-2, 10KOs) weighed in at a trim and ready 146 pounds.

“This is my first time headlining on a national stage,” said Cuevas (21-0, 14KOs), who plans to advance to the contender stage with a win on Friday. “I want to show all my fans that I’m worthy of a world title opportunity after this fight.” 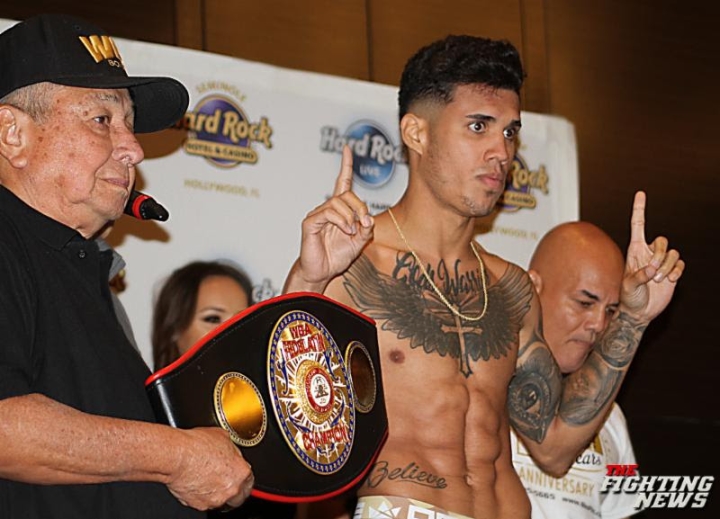 Cuevas’ active stretch comes the hard way, amassing 38 rounds in less than eight months in having gone the distance in each of his last four starts. He is coming off of an eight round decision victory over Albert Mensah this past May, just 10 weeks after a hard-fought 10-round unanimous decision win over veteran contender Ed Paredes.

Beltran (17-2-2, 10KOs) fights for the first time both in the United States and on Telemundo. All 21 of his previous bouts have taken place in his native Mexcio, including a narrow loss to unbeaten Oluwafemi Oyeleye in his most recent outing last November.

The summer headliner marks the third straight season in which the Telemundo series heads to South Florida, after more than a decade of playing exclusively in Central Florida and Mexico City.

“We’ve developed a great partnership with The Heavyweight Factory, our partners for this special Telemundo event,” Felix ‘Tutico’ Zabala, president of All-Star Boxing told BoxingScene.com. “They do a terrific job of bringing big time boxing to this fan-friendly venue and it’s a pleasure to once again bring the series here.”

Also on the show, two-time Olympic bronze medalist Ivan Dychko (8-0, 8KOs)—a Kazakhstan native now based out of Kissimmee, Fla.—faces Ocala’s Nate Heaven in a scheduled eight-round heavyweight affair. Dychko weighed 237.2 pounds, a near-career lightest from the 6’9” heavyweight, and barely heavier than the 6’6” Heaven who checked in at 236.2 pounds.

The July 12 show kicks off a four-week summer series stretch. The July 19 and July 26 installments will air live from Mexico before closing out the season on August 2 in Kissimmee, Florida.