A super fight between Mike Tyson and Roy Jones Jr. as originally discussed in 2003 would have been a sight to see.

Seventeen years later, two of the most legendary boxers of the latter half of the 20th century have finally agreed to fight, only this time in the exhibition variety on Sept. 12 on Triller pay per view.

With massive fan bases between them, Tyson, 54, and Jones Jr., 51, will attempt to turn back the clock and give fans a glimpse of what the dream fight would have looked like in a half-baked fashion.

But blood-thirsty fans seeking the second installment of Hagler versus Hearns should look elsewhere, because the fight will be more along the lines of glorified sparring than anything close to world class boxing.

California State Athletic Commission executive director Andy Foster told BoxingScene.com that he recently met with Tyson and Jones Jr. and outlined the parameters for which both fighters would have to agree in order for the match to move forward at the Dignity Health Sports Park in Carson, Calif. 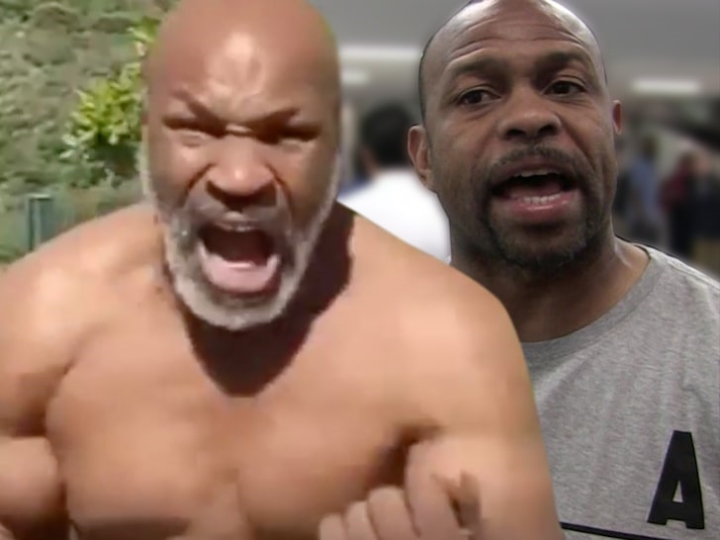 The rules for the exhibition, as explained by Foster, include: eight, three-minute rounds, 12-ounce boxing gloves, no headgear, no judges to score the fight, and due to the global pandemic caused by Covid-19, no fans in attendance and only the admission of essential personnel. Longtime referee Ray Corona will be the third man in the ring to make sure the action borders on tame rather than tenacious.

Foster did his due diligence and organized a Zoom meeting with Tyson and Jones Jr. a few weeks ago, where he clearly advised the fighters, “don’t ya’ll start trying to kill each other.”

“I wanted to have their assurances that they understand, ‘I don’t care if they spar. I don’t care if they work.’ They are world-class athletes, even still,” said Foster. “They have a right to earn, and all these types of things. They’re about the same age. We can’t mislead the public as to this is some kind of real fight. They can get into it a little bit, but I don’t want people to get hurt. They know the deal.

“It’s an exhibition. They can exhibit their boxing skills, but I don’t want them using their best efforts to hurt each other. They’re going to spar hard, but they shouldn’t be going for a knockout. This isn’t a record-book type of fight. This is not world-championship boxing right now. It’s not what this is. People shouldn’t be getting knocked out. The public can see what kind of shape Roy and Mike are still in.”

Foster is ultimately looking out for the safety of the quinquagenarians as they’ll be bringing a combined 110 years of age into the ring.

“We wanted to make sure that they both understood that it was a sanctioned exhibition fight. They can move around and make some money,” said Foster. “We’re glad to have it. All of our rules are going to be followed. It's going to look like a boxing match. Exhibitions like this happen sometimes. They can move around and make some money. I told them, ‘you get cut, it’s over.’ We’ll be reasonable. Ray won’t let people get hurt. He understands what an exhibition is. It’s not a fight-fight.

“I’m sure there are going to be times where it heats up. Ray’s job is going to be to put the ice back on without having to kill the whole thing. He’s that kind of referee. I feel that he’s going to be good at that, and he’s the right guy for this kind of a fight.”

Tyson isn’t a newbie in the exhibition world.

In 2006, he engaged in an exhibition match versus former heavyweight contender Corey Sanders as part of the “Mike Tyson World Tour," which was organized to help pay off Tyson's financial debts during the era.

Sanders hardly threw any punches with substance, and the boo birds were out quickly in the first round as both battled with shirts over their bodies, and only Sanders wearing a head guard. At one moment, Tyson hurt Sanders, made him stumble but held him up so he wouldn’t fall.

The fight lasted four rounds, and no winner was announced.

For Tyson and Jones Jr., since there won't be any judges present, there technically won’t be a winner unless a knockout occurs, which is the furthest thing Foster wants or envisions. In the meantime, several sportsbooks have already released betting odds for the fight.

“I want to be respectful to everybody. There are even Vegas odds on this thing. It’s not going to be scored,” said Foster. “How are there Vegas odds?”

Betting aside, there will be plenty of funds flowing for the fight.

Triller reportedly paid north of $50 million for exclusive streaming rights for the exhibition, according to CNN.

Roy Jones Jr. told TMZ he has the potential to make more than $10 million as long as the PPV numbers are big.

The A-side Tyson's money situation is a bit more mysterious.

“It's going to be for various charities,” Tyson told TMZ on Thursday. “Nobody has to ever worry about me getting rich, or getting jealous, or saying I'm doing this for money. I'm not getting anything. I just feel good doing this because I can.”

On Friday, a Tyson representative clarified the fighter’s comments regarding his purse.

"Mike is committed to charitable causes at this stage in his life. Mike is making a substantial donation to charity to help those affected economically, medically and socially by the pandemic. The exact amount will be determined after the bout,” the statement read.

Tyson plans on staging more exhibition fights in the future as part of his newly launched venture Legends Only League.

The event with Jones Jr. should determine whether or not there is an ongoing appetite for such showcases.

[QUOTE=theface07;20676731]You're living in a dream world. Mike is NOT the killer he once was. ****, he got KO'd by journeyman Kevin McBride 15 years ago! Since then, he's been smoking weed flat out, which will seriously affect his lung capacity…

[QUOTE=ELPacman;20673492]This is actually depressing to read. What the hell is this then? A live fake fight? Something like a Rocky movie recording? A WWE event? It sounds like they're both pre-warned to not hurt each other which is very understandable…

[QUOTE=HewJohnson;20673424]I’m under the assumption that these two are going to play pitty Pat with each other in the ring while knowing that everybody believe this will be a boxing match. They will make good money off PPV sales on this…

[QUOTE=REDEEMER;20673417]The referee must not know what he signed on to ,he’s probably going to frustrate Mike and step in one to many times to break the moments up at times ,he’s not going to be able to control Mike he…