PHILADELPHIA – Thomas Mattice came out on the wrong end of a decision this time on “ShoBox.”

Determined Mexican Isaac Cruz edged Mattice by majority decision in a 10-round main event Showtime televised from 2300 Arena. Judges Adam Friscia and Steve Weisfeld scored their lightweight fight the same, 96-94, for Cruz, but judge David Braslow had it even (95-95).

Cruz constantly pressured Mattice and hammered away at Mattice’s body in many rounds. Mattice was effective boxing off his back foot at times, but he couldn’t hurt the shorter, slower Cruz. 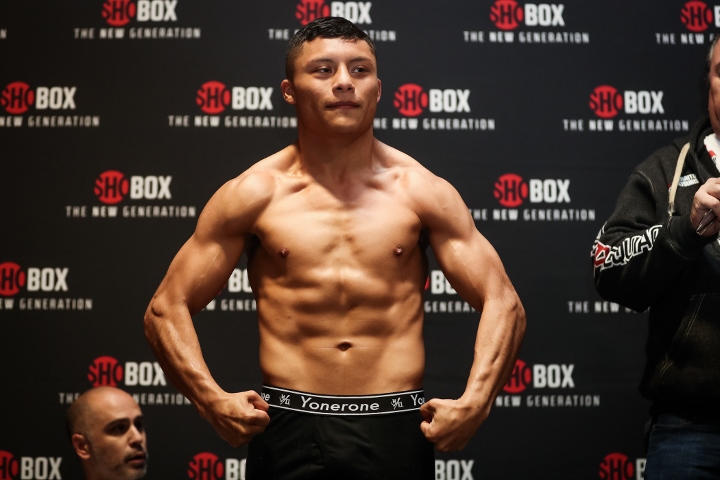 The 21-year-old Cruz improved to 19-1-1 (14 KOs). He is 14-0-1 since suffering his only professional defeat, an eight-round unanimous decision to Luis Miguel Montano (then 8-5) four years ago in Mexico City.

The 29-year-old Mattice (15-2-1, 11 KOs) had recorded the most impressive victory of his career in his previous appearance. The Cleveland native beat undefeated favorite Michael Dutchover by eighth-round technical knockout in that bout, September 20 in Midland, Texas, Dutchover’s hometown.

Two of Mattice’s prior appearances on “ShoBox” produced controversial results – an eight-round, split-decision win against Zhora Hamazaryan and an eight-round split draw in their rematch.

As his fight versus Cruz moved toward a close conclusion Friday night, Mattice landed an overhand right to the head and then a left hook to the body in the 10th round. Those shots temporarily kept Cruz from coming forward.

Cruz rallied toward the end of the 10th, but Mattice came back again, fired hard shots at Cruz and finished the fight strong.

Cruz continued pressuring Mattice throughout the eighth round. Mattice, bleeding from his nose, tried to keep Cruz off of him with his jab, but Cruz couldn’t be denied.

A right by Mattice landed to the side of Cruz’s head early in the sixth round. Mattice caught Cruz with a right uppercut and stepped around his opponent later in the sixth.

Mattice worked off his jab during the fifth round, but he couldn’t keep Cruz from coming forward.

Mattice fended off the hard-charging Cruz for much of the fourth round, until Cruz caught Mattice with a flush left hook with about 40 seconds to go in that round.

Mattice fought off his back foot for most of the first two rounds, but he began backing up Cruz with hard body shots in the second half of the third round.

Cruz began pressuring Mattice as soon as their fight started and went after the taller, longer boxer’s body. He hit Mattice with several thudding body shots in the second round.

Gad they didn´t steal the win from Cruz.....he was attacking non stop, finally the judges are giving credit to the guy who risks more. Mattice basically back pedaled and hugged....