Crawford vs. Kavaliauskas Finalized For December 14 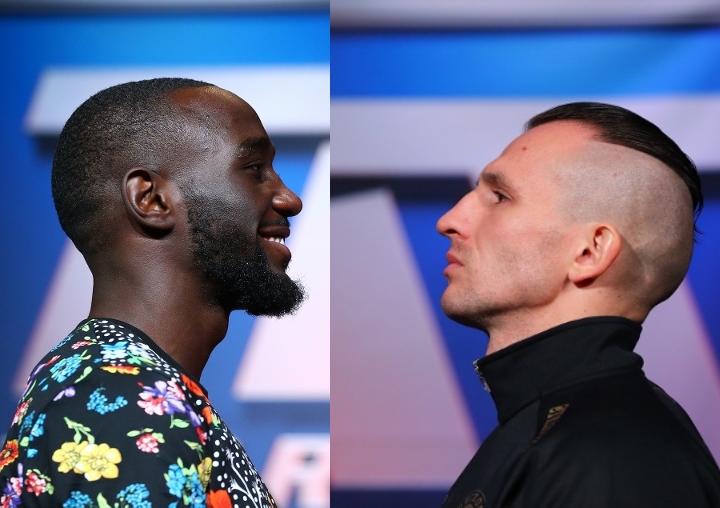 The undercard, with fights to be announced in the coming weeks, will stream exclusively on ESPN+, the leading multi-sport streaming service, starting at 6 p.m. ET/3 p.m. PT.

“This is the best fight card of the year, and Madison Square Garden is a fitting venue for what will be a special night,” said Top Rank chairman Bob Arum.

“Terence Crawford is a generational talent, but he’ll have his hands full against the ‘Mean Machine.’ Teofimo Lopez is taking a giant step up against Commey, and it will be a tremendous fight. Mick Conlan has been asking for Nikitin since the day he signed with Top Rank. He finally gets his wish, and I know he wants to correct the tremendous injustice of the Rio Olympics.”

Promoted by Top Rank, in association with DiBella Entertainment and MTK Global, tickets priced at $506, $306, $206, $106 and $56 (not including applicable fees) go on sale Friday, October 18 at 12 p.m. ET and can be purchased at the Madison Square Garden Box Office, all Ticketmaster outlets, Ticketmaster charge by phone (866-858-0008) and online at www.ticketmaster.com or www.MSG.com.

[QUOTE=sugarsmosley;20123528]Crawford is 32 and his best win is possibly featherweight gamboa... Dont get me wrong hes a top PFP fighter easily.. i think he beats spence tbh, but his resume is actually somehow worse than GGG during his title years.[/QUOTE]…

[QUOTE=T.M.T;20123132]Mean machine. Lmmao 😂[/QUOTE] This guy Mean Machine, beat everybody he needed to beat to get in to the number 1 position, he's Undefeated, he's a 2x Olympian, he's better then Amir khan. It's a mandatory fight & it ain't…

[QUOTE=j.razor;20124668]Wait. If you make plenty of money then why would you cry over PPV for fighters putting their lives on the line for your entertainment?? :thinking:[/QUOTE] I've seen those fights I want new experiences to entertain me.

[QUOTE=Mister Wolf;20124343]Crawford isnt a big puncher I dont know why you would expect him to spark anyone. Dude is a master technician who beats his opponents with his high ring IQ including naturally bigger opponents like Horn, Benavidez, and now…

[QUOTE=Curtis2;20124340]It would be TKO vs Porter, T Crawford would have him out on his feet either against the ropes or center ring....one way or the other, trust me it'll get done![/QUOTE] :cool2: So when that fight happens I will be…