Crawford Ready For His Superstar Moment Under Vegas Lights

Terence Crawford has officially reached the level Frank Sinatra used to sing about.

He’s made it there. And now it appears he will make it anywhere.

The amiable Nebraskan takes his Midwestern act back to Las Vegas on Saturday night and will presumably emerge a step closer to superstardom after separating ersatz Manny Pacquiao conqueror Jeff Horn from the WBO share of the 147-pound title he won 11 months ago in Australia.

“With this level of fighter,” HBO’s Max Kellerman once gushed of Crawford, “if you put a regular fighter in front of them, there’s simply nothing they can do.”

Supposedly, Horn, who’s not lost any of his 19 fights – 18 wins, 12 KOs, one draw – as a welterweight, is a worthwhile challenge. And the confident five-year pro may indeed have some success early while forcing Crawford to adjust to his frenetic, roughhousing style.

But once the adjustments are made, the difference is skill sets will be quickly evident.

Crawford typically widens competitive gaps with foes in the initial few rounds, then finishes the displays in the middle stages – his seven title-fight stoppages have averaged 7.28 rounds – with performances warranting similar raves from the likes of Roy Jones Jr.

“Terence Crawford is ready for anybody in the world, in any weight class right now,” Jones said, brushing off a past suggestion by then-trainer Freddie Roach that Crawford couldn’t handle the likes of Manny Pacquiao.

“For him to say he’s not ready for Manny Pacquiao, I think that’s very wrong. To me, Terence Crawford is ready or anybody on the planet that’s close to his weight class.” 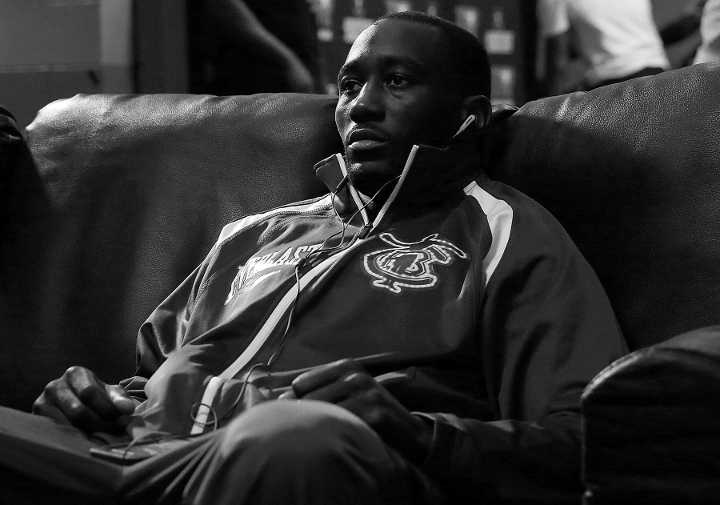 Already a two-division champion and a pristine 10-0 on the championship level, Crawford agrees.

“I told everybody,” he said. “I’ve got power in both in both hands and I’ve been blessed with an IQ and boxing ability. They’re going to take me a long way.”

Given the promotional and network divides that are the signature element of modern boxing, it’s always something of a crapshoot to predict what a guy will do going forward.

But regardless of how the politics fall out, there’s no question the kid’s got options.

None of which are more attractive than a guard-changing duel with Pacquiao himself, which seemed completely feasible – if not downright likely – before the intermittently active Filipino instead pursued a third go-round with Timothy Bradley, briefly retired, returned to snatch a title belt from Jessie Vargas and abruptly lost it to Horn last summer.

He’ll return yet again against Lucas Matthysse next month.

Promoter Bob Arum started making statements about Crawford and Pacquiao a while back – the way he used to do about Brandon Rios when “Bam Bam” was an unbeaten lightweight champion.

“Down the road – and it's very possible – that a year from now we put him in with Pacquiao,” the Top Rank czar said, after Crawford ripped Yuriorkis Gamboa in June 2014.

“That would be a huge fight and a great fight. If you really think you have a great fighter with superstar qualities, you move him that way; you don't protect him. You move a superstar into the biggest fights you can make for him, and that's what we are going to do.”

And after Crawford chopped down former sparring mate Ray Beltran in a 135-pound farewell and followed with a virtuoso 7-for-7 run at 140, it’s far less difficult to perceive him having his way with Top Rank’s most prized financial property if it ever does occur.

The since-deposed Roach’s opinions notwithstanding.

Retirement chatter or not, it’s a safe bet that mindset still holds.

Wow, what a sad time for boxing. A 31 year old, multi-division champ facing a guy outside the top 5 at the division is finally his "superstar moment." If fighting Horn in Vegas is a "superstar moment" then what is…

[QUOTE=millcitymauler;18831919]I totally agree...however Top Rank obviously didn’t get the message that this is Bud’s “superstar moment” by NOT televising this fight. FFS, these guys only box once or twice a year![/QUOTE] Wait!! It's not on tv over there? Not on…

I'm looking forward to this. Tough first fight for Crawford at 147. Horn can throw hands.

Looking forward to attending this one on Saturday :boxing::boxing: