Crawford: Other Welterweights Will Be Cautious After Horn Fight

LAS VEGAS – Terence Crawford doesn’t think any of the elite welterweights will be in a hurry to fight him after watching what he did to Jeff Horn.

Errol Spence Jr., Keith Thurman, Danny Garcia and Shawn Porter – four fighters Crawford wants to face – all are better than Horn. But Crawford is certain he displayed skills and strength during his dominant victory over Horn that’ll make them hesitant to embrace boxing him.

“I feel like I just displayed my talent and my power,” Crawford said during the press conference following his ninth-round stoppage of Horn on Saturday night. “He’s supposed to be a big welterweight in the division. And they see how I dealt with him, so they’re gonna be a little cautious.” 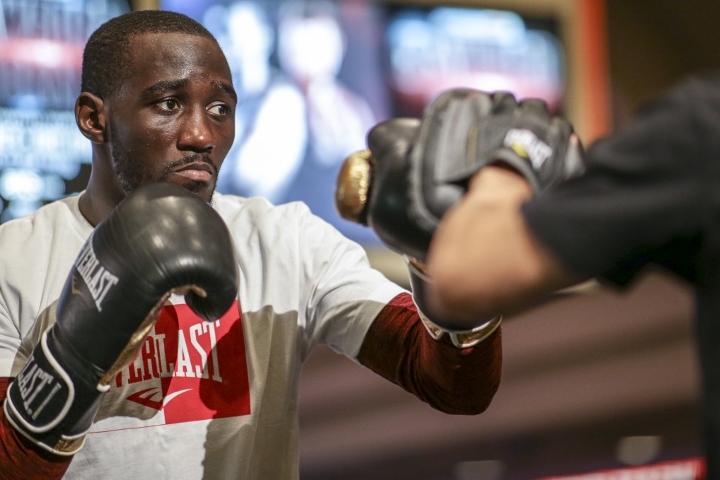 Spence said recently that he wants to “clean up my side of the street” before fighting Crawford.

The unbeaten IBF welterweight champion meant he wants to face WBA champ Keith Thurman and the winner of the upcoming Danny Garcia-Shawn Porter bout for the vacant WBC title prior to pursuing Crawford, who won the WBO championship from Horn. Spence, Thurman, Garcia and Porter all are advised by Al Haymon and fight for his Premier Boxing Champions organization.

The 28-year-old Spence (23-0, 20 KOs) is set to defend his title against mandatory challenger Carlos Ocampo on Saturday night in Frisco, Texas. Showtime will televise the scheduled 12-round bout between Spence, of Desoto, Texas, and Mexico’s Ocampo (22-0, 13 KOs) from Ford Center at The Star, the Dallas Cowboys’ training facility.

Bob Arum, Crawford’s promoter, expects him to return to the ring at some point in October. He is not expected to fight Spence, Thurman, Garcia or Porter next.

“Right now, we’re gonna go home, enjoy this win,” Crawford said. “We’ve been out the ring for a long time [since August 19], so we’re just happy to be back in the ring and we’re gonna make up a plan and see where we go. But I assure you that we’re looking for the biggest fights out there.”

[QUOTE=boliodogs;18852105]He might be right about some welterweights avoiding him but not Spence. Spence is fearless and he will fight him. In my opinion Spence is better than Crawford and will knock him out if they fight. Crawford is an excellent…

What a fight when it gets round to happening

Some of you guys are seeing what I said all along. It's a TR hype job to the fullest. And it gets worse. TR will let his 1st defense against Bam-Bam Rios, Mike Alvarado, or worse, Karim Mayfield. Those PBC…

[QUOTE=LCRUMMY36;18851740]Until Crawford beat someone elite he's just another wanna be to me. Jeff horn shouldn't have been in the ring and ur embellishing that win. The only other Welterweight I see him beating is Porter is because Porter sytle.. Thurman…

[QUOTE=lolpz;18852776]Correct, there are many more dimensions and factors that I think people dont take into account before drawing their conclusions. Good breakdown of the Lara-Hurd fight, if a guy is there to get hit Lara is going to take what's…