The unbeaten WBO welterweight champion hopes his initial meeting with his promoters at Top Rank Inc. and ESPN leads to him boxing mandatory challenger Egidijus Kavaliauskas on December 14 at Madison Square Garden. If that fight can be finalized, ESPN would televise Crawford-Kavaliauskas as the main event after a co-feature that’ll pit IBF lightweight champ Richard Commey (29-2, 26 KOs) against his mandatory challenger, Teofimo Lopez (14-0, 11 KOs).

“Hopefully,” Crawford told BoxingScene.com on Friday at MGM Grand. “We still haven’t had a sit-down to talk about the numbers or anything. We’ve got a date locked down. That’s the start of it, so I just had a meeting with Top Rank and ESPN. Hopefully, we can get that locked down and get everything in order for the fight that’ll happen December 14th.” 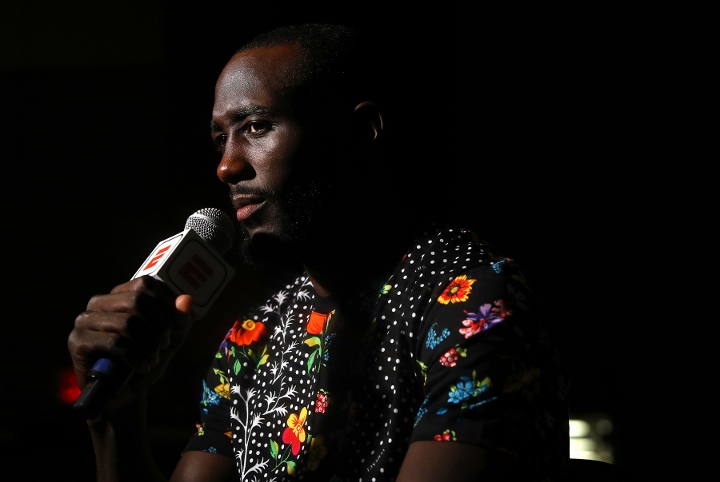 Assuming a deal is completed, the 31-year-old Crawford (35-0, 26 KOs), of Omaha, Nebraska, would be heavily favored to beat Lithuania’s Kavaliauskas (21-0-1, 17 KOs), the WBO’s No. 1 contender at 147 pounds. Kavaliauskas, also 31, settled for a 10-round majority draw with Ray Robinson in his last bout, but Crawford stressed that dismissive fans and media shouldn’t shun him.

“Listen, this guy is not a walk in the park,” Crawford said. “He’s strong. He’s undefeated. He’s got a deep amateur background, going to the Olympics I think twice. They look at him and say [about me], ‘He’s not fighting nobody because of who he is.’ But l’m like, ‘This dude can fight, no matter what you say. He’s my No. 1 contender for a reason.’ Me, as a fighter, I have never overlooked ‘em or take ‘em lightly or discredit him for getting to where he got to at this point.”

“Ray Robinson is tall, rangy and awkward,” Crawford said. “It probably threw him off a little bit, you know? But we’ve got two totally different styles, and that was that.”

Crawford last fought April 20, when he stopped England’s Amir Khan (34-5, 21 KOs) in the sixth round at Madison Square Garden.

[QUOTE=mathed;20065674]Bud's gonna stomp this guy out, get paid as much as Spencer and Porter combined, then troll all his haters on NSB to enjoy the victory. He's got these dudes shook for real, Hahaha! [IMG]https://proxy.duckduckgo.com/iu/?u=https%3A%2F%2Fmedia.giphy.com%2Fmedia%2FmSPevXqDPwqOI%2Fgiphy.gif&f=1&nofb=1[/IMG][/QUOTE] When you face no name…

[QUOTE=Pigeons;20063775]You think Khan was offered $5M upfront? Or was he offered $4M and negotiated it up to $5M? Maybe Danny could have done the same thing if he A) picked up the phone or B) didn't take orders from Al.…