Crawford: I Done Called Out The Top Welterweights; No Need To Do It No More

Crawford wants to fight the sport’s top welterweights to prove that he is the class of the 147-pound division. The unbeaten WBO champion isn’t certain the feeling is mutual in each case, but Crawford recognizes he can strengthen his welterweight legacy by boxing the likes of Errol Spence Jr., Manny Pacquiao, Danny Garcia and Keith Thurman.

Other than Pacquiao, those fights won’t be easy to make while Crawford is contractually committed to Bob Arum’s Top Rank Inc. and those opponents are tied to Al Haymon’s Premier Boxing Champions. When they’re ready, though, Crawford will be prepared to test himself more than he has been pushed in his five welterweight bouts by Jeff Horn, Jose Benavidez Jr., Amir Khan, Egidijus Kavaliauskas and Kell Brook, whom Crawford stopped in the fourth round Saturday night at MGM Grand Conference Center. 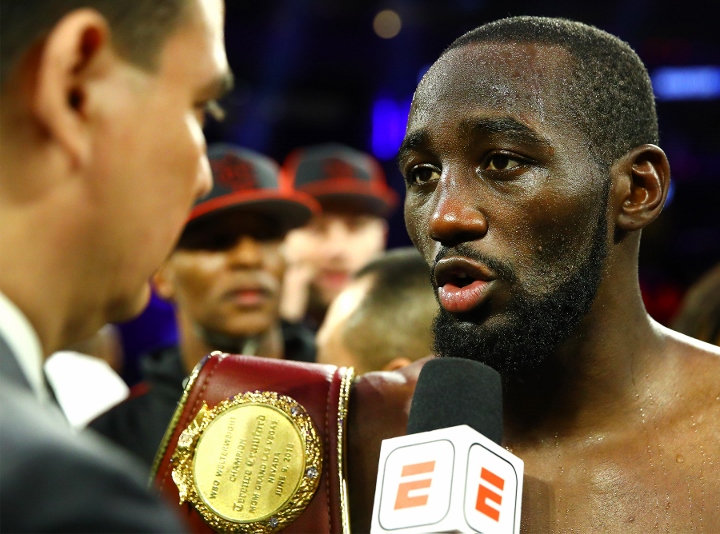 “Man, listen, I done called them out,” Crawford told a small group of reporters after defeating Brook. “I’m not gonna keep calling somebody out every time y’all put a camera in my face. You know, I already did that, so there’s no need to do it no more. And if it get made, it get made. Like I said before, I’m not mad, I’m not sad. If it don’t happen, it don’t happen. You know, it’s just the way the cards roll. I wish all the guys in the top welterweights, I wish them nothing but the best.”

Whereas fans want Crawford to fight Spence next, Crawford would prefer to face Pacquiao prior to a showdown with Spence. The Omaha, Nebraska, native has wanted the Pacquiao fight since they both were promoted by Arum’s company, but it came closer to happening in recent months than ever before.

Arum and Crawford (37-0, 28 KOs) stated following his stoppage of Brook that they want to resume negotiations for the Pacquiao fight as soon as possible. Pacquiao (62-7-2, 39 KOs) will turn 42 next month, but he beat the previously undefeated Thurman by split decision in his last fight, which took place in July 2019 at MGM Grand Garden Arena.

“Yeah, of course,” Crawford continued. “I wanna revisit that fight. You know, that was the fight that should’ve happened right now. You know, but being that the pandemic happened and they wasn’t gonna allow fans in the Middle East, so we had to put a hold to that. Everything was already 95 percent done. We had the venue. The money was almost there. It wasn’t quite there. That was the only thing that we was waitin’ on. But that’s what messed up the fight, was the pandemic.”

As for Spence (26-0, 21 KOs), the southpaw from DeSoto, Texas, is scheduled to return to the ring December 5 at AT&T Stadium in Arlington, Texas. He’ll defend his IBF and WBC titles that night against Philadelphia Danny Garcia (36-2, 21 KOs) in a FOX Sports Pay-Per-View main event.

If Bud beats Pac, both he and Spence will be unified and undefeated going into the undisputed fight.

Imagine Crawford having close fights with Porter, Thurman, Spence, win or lose. Fans would call him a hype job, they would say he was exposed and so on. If he continues fighting guys like Kavaliauskas, washed up Brook...he will remain…

[QUOTE=Bronx2245;20904560]I think Pacquiao goes with Mikey or McGregor! Crawford should be telling Todd Duboef "Get me Shawn Porter on ESPN, or let me go fight Spence on FOX PPV, or just let me go!"[/QUOTE] ... Pacquiao may fight in Australia,…