Crawford: I Was Arrogant When Gamboa Hurt Me; I Learned

Jeff Horn’s trainer has stated during the buildup toward their welterweight title fight that if Yuriorkis Gamboa could hurt Crawford in their lightweight championship match nearly four years ago, the bigger, stronger Horn most certainly is capable of hurting and knocking out the unbeaten challenger Saturday night at MGM Grand Garden Arena in Las Vegas (ESPN+). Gamboa buzzed Crawford with a left-right combination early in the ninth round of their June 2014 bout.

Crawford came back quickly to drop Gamboa twice more, four times in all, and stopped him in that intriguing ninth round in Omaha, Nebraska, Crawford’s hometown. 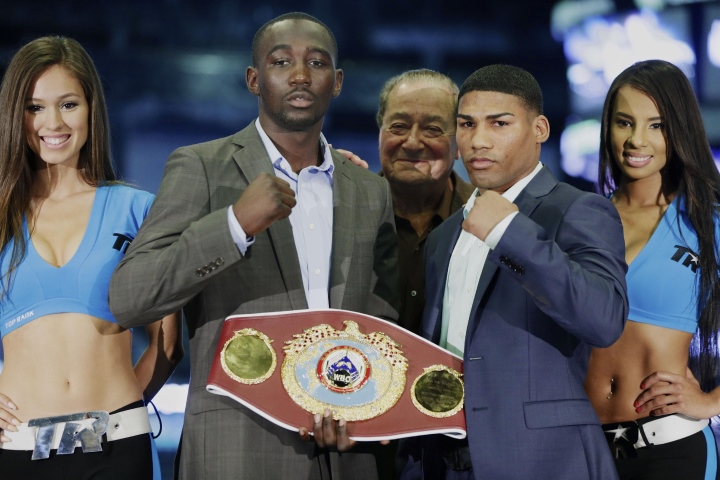 In Horn, Crawford will encounter a slightly taller opponent who’s used to competing within the welterweight division. Crawford will make his debut at 147 pounds when he challenges Horn on Saturday night for the Australian champion’s WBO welterweight title.

Crawford hasn’t been noticeably hurt during any of his eight fights since he beat Cuba’s Gamboa, who was 23-0 when he challenged Crawford for the WBO lightweight crown. He has won six of those bouts by knockout or technical knockout.

The 30-year-old Crawford envisions making a smooth adjustment to his new weight class and is more than confident that he’ll take Horn’s power well.

“Well, everybody keeps resorting back to the Gamboa fight,” Crawford said during a conference call Tuesday. “You know, if you look at the Gamboa fight, that was in 2014. I’m in 2018 right now, you know, and they can’t label a fighter that have hurt me more than Gamboa hurt me. So I feel like I grew in that fight.

“I was a little arrogant in that fight and he made me respect it. And I just felt like I done grew and learned from that moment. And it hasn’t happened since. So if they’re gonna bank their shot on the Gamboa [fight], then so be it.”

The intelligent, versatile Crawford (32-0, 23 KOs) is consistently listed as a 10-1 favorite against Horn (18-0-1, 12 KOs). Horn, also 30, will attempt to make the second defense of a WBO welterweight title he won by scoring a controversial, unanimous-decision victory over Manny Pacquiao (59-7-2, 38 KOs) on July 2 in Horn’s hometown of Brisbane.

[QUOTE=el***;18839531]I forgot all about that, Cunningham dropped Fury, he was a dwarf too. 44lbs smaller, former cruiserweight. Fury is garbage.[/QUOTE]But he got up and ko'd Cunningham and became the lineal hvw champion of the world. Foh with your lunacy lmao...

[QUOTE=Drama Show;18842780]he was half his damn size, just watch the fight. people would have absolutely crucified golovkin if he struggled tht much against brook. in fact they did even though he got him out of there early lol. gamboa was…

[QUOTE=Reloaded;18842749]They weighed the same, and at the time Gamboa was a bad ass with very fast hands and the fight was TCs breakout fight, Gamboa at the time was way more dangerous and had a lot more boxing ability than…

[QUOTE=Drama Show;18838629]Really embarrassing getting wobbled by Gamboa when u consider the size difference[/QUOTE] They weighed the same, and at the time Gamboa was a bad ass with very fast hands and the fight was TCs breakout fight, Gamboa at the…