Crawford withstood Kavaliauskas’ hardest shots, though, demonstrated that he’s as tough as he is skilled and knocked out his very game mandatory challenger. The undefeated Crawford floored Kavaliauskas once in the seventh round and twice in the ninth round, before referee Ricky Gonzalez stopped their scheduled 12-round welterweight title fight at Madison Square Garden.

Gonzalez halted the action 44 seconds into the ninth round, following the third knockdown of a main event ESPN televised.

Crawford, a three-division champion from Omaha, Nebraska, made the third defense of the WBO welterweight title he won by stopping Australia’s Jeff Horn in June 2018 at MGM Grand Garden Arena in Las Vegas. Crawford was ahead on all three scorecards when their fight was stopped (79-72, 79-72, 78-73).

“I thought I had to entertain y’all for a little bit,” Crawford told ESPN’s Bernardo Osuna following his win. “He’s a strong fighter, durable, and I thought I’d give the crowd something to cheer for.”

Bob Arum, Crawford’s promoter, reiterated after Crawford’s win that he hopes to match Crawford with former IBF and WBC welterweight champ Shawn Porter in his next fight. Arum emphasized, however, that it’ll be up to Crawford and Porter, not him and advisor Al Haymon, if they want to square off.

A few minutes before Arum came to ringside late Saturday night, Crawford appeared to hurt Kavaliauskas with a right hook late in the eighth round. He ran out of time to finish off Kavaliauskas in that round, but Crawford jumped on a vulnerable Kavaliauskas early in the ninth round. 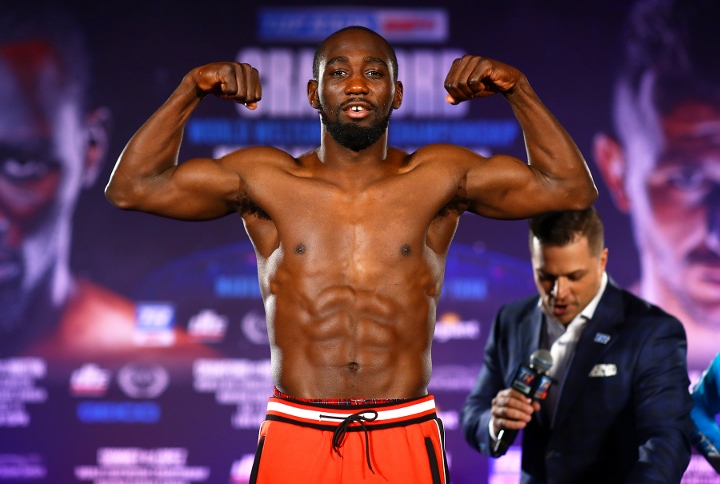 Crawford connected with a left-right-left combination before dropping Kavaliauskas with a right uppercut early in the ninth round. Kavaliauskas got up, but Crawford’s right hook dropped again, almost immediately.

Gonzalez waved an end to the action following that third knockdown.

“The round before that, my coaches kept telling me stop loading up,” Crawford said. “I was loading up a lot because the first couple clean shots I landed, I knew I hurt him. I wanted to give the crowd a knockout. When I started letting my hands go, I started landing more fatal shots.”

About a minute into the seventh round, Kavaliauskas connected with four punches on Crawford’s head. Late in the seventh, however, Crawford caught Kavaliauskas with a right to the side of his head that knocked Kavaliauskas to his gloves and one knee.

Crawford went after Kavaliauskas in the fifth round, when he often abandoned defense to try to land hard shots on the game challenger. Crawford backed up Kavaliauskas for much of that round.

Kavaliauskas nailed Crawford with a hard, straight right hand that rocked the champion and caused him to hold at the midway mark of the third round. Crawford went to one knee as he tried to hold Kavaliauskas around his waist.

Gonzalez didn’t count that as a knockdown, though, because Kavaliauskas’ punch didn’t directly cause Crawford’s trip to the canvas.

“I wasn’t hurt at all,” Crawford said. “I got up and went straight to him. I wasn’t hurt by no means. I walked through everything he threw all night.”

Kavaliauskas’ short left/overhand right combination caught Crawford with about 40 seconds to go in the second round.

As has become Crawford’s custom, he opened the fight in a southpaw stance. Neither fighter landed many impactful punches in those opening three minutes.

Lithuania’s Kavaliauskas was the mandatory challenger for Crawford’s welterweight title, even though the contender nicknamed “Mean Machine” didn’t win his previous fight.

Crawford entered their fight as at least a 16-1 favorite according to most Internet and Las Vegas sports books. He was heavily favored because he is widely viewed as one of the best boxers, pound-for-pound, in the sport and because Kavaliauskas fought to a 10-round majority draw with Ray Robinson in his last fight.

Kavaliauskas called his draw with Robinson “bullsh*t” during a recent interview with BoxingScene.com. Two judges scored that bout even (95-95, 95) and another scored it 97-93 for Robinson on March 30 at 2300 Arena in Philadelphia, Robinson’s hometown.

[QUOTE=Mister Wolf;20266767]Don't get me wrong Crawford fighting orthodox is still better than most fighters as proven by Dulorme. Neither Ugas or Jesse Vargas could do that to Dulorme. He should have came out orthodox vs Egis because the straight right…

[QUOTE=Realizniguhnit;20266756]Maybe me and Crawford are the only ones that don't then because he just said he would have rather started the fight against EK last sat in the Orthodox stance. He's a switch hitter but he's not better in the…

[QUOTE=Mister Wolf;20264629]Naw, its not that serious. Crawford is better as a southpaw everyone knows that. His best punch is the right hook to the head or body. He has been hit by the straight right hand fighting both southpaw and…

[QUOTE=Sledgeweather17;20264484]Bro Crawford spends most of his time in the southpaw stance. Against Gamboa he fought the first three rounds in Orthodox, got the breaks beat out of him, and switched to southpaw for the rest of the fight. Against Horn…