After all, Thurman has been downright dismissive at times when it comes to Crawford’s status as a welterweight champion. This was Crawford’s opportunity, if the unbeaten three-division champion saw fit, to pick apart Thurman’s performance against Josesito Lopez.

A respectful Crawford instead took the high road. He praised Thurman for fighting through serious trouble during a seventh round that nearly changed the course of Thurman’s career. 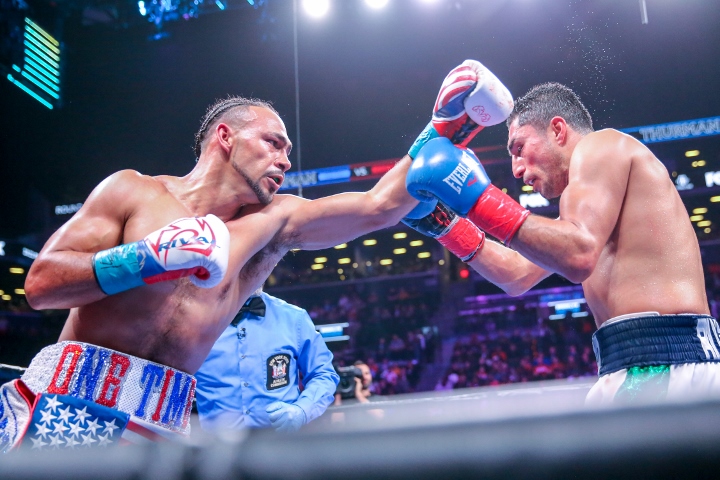 Crawford was impressed by Thurman’s determination once Lopez drilled him with a right hand that hurt Thurman badly. There was more than half a round to go in the seventh when Lopez tattooed Thurman with that shot – an eternity in boxing.

Thurman mostly moved and moved – and moved some more – to make it to the end of that seventh round. The WBA “super” world welterweight champion recovered quickly and consistently out-boxed Lopez to win a 12-round majority decision at Barclays Center in Brooklyn.

Thurman might fight Manny Pacquiao (61-7-2, 39 KOs), the WBA world welterweight champion, in his next match. Beating even a 40-year-old Pacquiao could help Thurman regain some of the credibility he lost versus Lopez.

Going 12 rounds against a rugged veteran late last month also should help the Clearwater, Florida, native get back into a rhythm.

Thurman (29-0, 22 KOs, 1 NC) hadn’t boxed in 22 months prior to opposing Lopez (36-8, 19 KOs, 1 NC) because he had surgery to remove bone spurs from his right elbow in April 2017 and suffered a subsequent injury to his left hand. Crawford feels Lopez had more to do with Thurman’s performance than his lengthy layoff.

“He had a tough opponent that was real determined in that fight,” said Crawford (34-0, 25 KOs), who’ll defend his WBO 147-pound championship against Amir Khan on April 20 at Madison Square Garden. “All I can say is he got the win, he did what he was supposed to do to get the victory. He’s still undefeated, he’s still champion of the world and he’s moving on to the next.”

Crawford acknowledged that he was surprised Thurman made it out of a seventh round in which Lopez landed numerous power punches against the champion.

“I thought he had him,” Crawford said. “But Keith showed his grit and his championship-caliber chin, stayed up and it just tells about his character as a fighter. He did what he had to do to shake it off and boxed to a victory.”

[QUOTE=_original_;19494656]lol I mean what is there to criticize? He had a rough round in his return fight while winning 10 of the 12 rounds?[/QUOTE] Yep. Prime Keith Thurman doing what he does, champion mentality. Get hurt but keeps pushing as…

How the hell could Crawford criticize Thurman??? He fights Khan next.

[QUOTE=McNulty;19495956]I don't htink he's trying to exhibit class here. I think it's more of Crawford looking to get a Thurman fight because he looks like a wounded gazelle on the Serengeti.[/QUOTE]I doubt Thurman will do it! I think if Thurman…

Though im not the biggest bud crawford fan in the world my respect level 4 him just went up a couple notches...well said bud. i know one time would nt have been so kind if the shoe was on the…