Crawford Coach: I Told Benavidez He'd Get His Ass Kicked!

Terence ''Bud'' Crawford stopped previously unbeaten Jose Benavidez with 18 seconds left in the 12th and final round to retain his WBO welterweight championship on Saturday night.

Crawford had knocked Benavidez to the canvas with a powerful uppercut with 46 seconds left, and then Crawford finished him off with consecutive right hands.

After referee Celestino Ruiz stopped the fight, Crawford stuck out his tongue at his fallen opponent, who had made this a personal grudge match with insults he's directed toward Crawford for months. 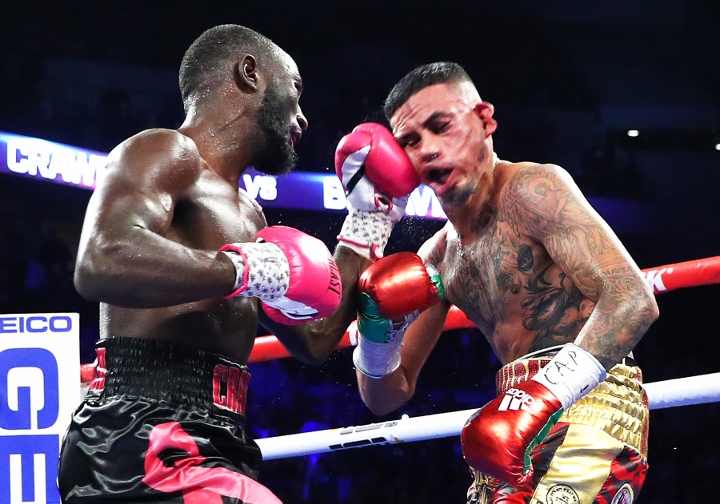 Next up for Crawford? He would like a unification bout with IBF champion Errol Spence Jr., something promoter Bob Arum has said he would like to make happen sometime in 2019. The only problem is that Spence is managed by Al Haymon and fights exclusively on Showtime and FOX, but Arum has said that would not be an insurmountable problem.

The 31-year-old Crawford (34-0, 25 knockouts), ranked first or second on the world's top pound-for-pound fighter lists, put on a workmanlike performance for the first half of the fight in front of a hometown crowd of 13,000 that included Crawford friend and billionaire Warren Buffett.

Benavidez (27-1, 18 KOs) began tiring in the seventh after taking body shot after body shot from Crawford, who started out in an orthodox stance but worked most of the fight as a southpaw.

For much of the contest, Crawford was breaking Benavidez down with hard shots to the body.

“We knew that he wanted to get in my head and make it a firefight,” Crawford said. “I saw him in his corner taking deep breaths and knew he was done.”

Crawford kept coming in the 12th, and Benavidez could take no more of the steady punishment the three-division champion doled out in his first title defense at welterweight.

Said Crawford’s trainer/manager Brian McIntyre: “I told Benavidez he was going to get his ass kicked. And that’s what Bud did.”

[QUOTE=Noelanthony;19200594]Ring IQ and overall skill set doesn’t match up to Crawford. I can easily admit that. However if it’s anyone that I’m unsure about whether a fighter can dig deep it’s Crawford. Obviously he has not had to. Though like…

[QUOTE=ptek;19199359]Ok we will see, don't get me wrong I like Spence great fighter good at everything but his ring iQ may not be up to scratch that's the difference I see, never really seen Spence take a solid blow either…

[QUOTE=Noelanthony;19197548]We will be waiting for Crawford( yes I said We) We need him carefully seasoned and marinated. We will eat him up just like Grandma’s cooking..... Man down:boxing:[/QUOTE] Ok we will see, don't get me wrong I like Spence great…

[QUOTE=ptek;19194073]Yer that's right he has blown away 2 undefeated guys now still a couple more fights and he's ready for Spence and thurman hopefully we will see this fight by the end of 2019.[/QUOTE] We will be waiting for Crawford(…

[QUOTE=RapidSon;19194479]Idk there's still just something about Crawford I just dont like. Maybe because everyone's on his nuts when he hasn't fought a real killer in the ring.[/QUOTE] Possibly ,I feel the same way. Not to mention I’m a Spence fan…