Crawford: Benavidez Is Underestimating My Size & My Power

OMAHA, Nebraska – Terence Crawford has heard all this before.

Just four months ago, in fact. Jeff Horn’s size and strength advantages were supposedly factors Crawford would need to combat during his first welterweight fight.

Crawford proceeded to nullify the taller, heavier Horn’s supposed strengths almost immediately and dominated the previously unbeaten Australian on his way to a ninth-round, technical-knockout victory June 9 in Las Vegas. At 6 feet even, Jose Benavidez Jr. is about three inches taller than Horn, four inches bigger than the 5-feet-8 Crawford. 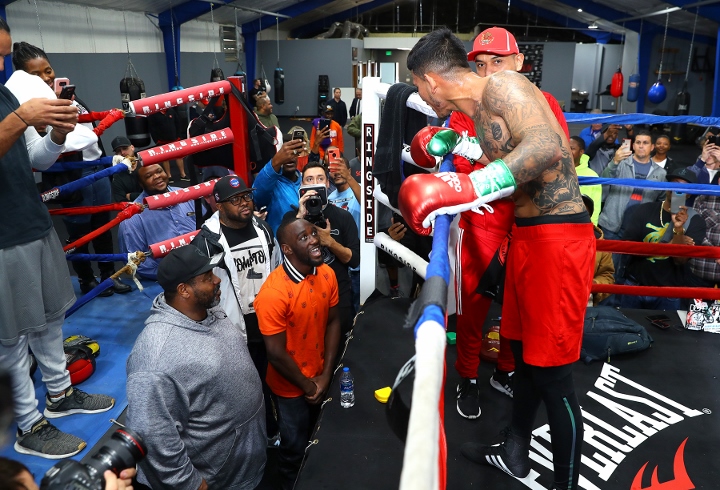 The undefeated Crawford still isn’t the least bit concerned about Benavidez’s size as their 12-round, 147-pound championship match nears.

“He tries to walk his opponents down, which I don’t believe he’s gonna be able to do that to me,” Crawford said before they weighed in Friday at CHI Health Center in downtown Omaha. “I think he’s underestimating my size and my power. But come fight night, once he feel it he’s gonna know that he’s not gonna be able to just walk in, with his hands down.”

The unbeaten Benavidez is convinced Crawford won’t be able to handle his power and pressure. The Phoenix native has criticized Crawford for “running,” yet Crawford is confident Benavidez will quickly realize what Horn learned early in their scheduled 12-rounder at MGM Grand Garden Arena.

[QUOTE=Corelone;19187516]They just have him on thier p4p list because they like the car he drives?[/QUOTE] Maybe you can't read, but there are a lot of people that don't believe Crawford can beat Spence or any of the other top WWs.

Jose's height is all over the place. Some places saying 5-10 and boxrec says 6'-2". LMAO wtf. At the weigh in he is a few inches taller than crawford. That is nothing crawford cant neutralize in the first round.

Jose is undefeated and has his advantages. The only problem is Bud is a step up, a big one skillwise. Jose is a strong B about to see what a good A can do.

This should be a good scrap.. let me make sure im ready.. popcorn, check, ranch cornnuts, check, beef jerky, check, pork skins, check, green, check, cigz, check, lighter, check.. alcohol.. hmmm.. Corona or Heineken? ..as you were, this may take…