Crawford Back In Camp; Not Yet Hitting Hard With Hurt Hand

Terence Crawford returned to Colorado Springs this weekend to resume training camp for his fight against Jeff Horn.

The former two-division champion is using his injured right hand, but Crawford will be cautious with it for a few more weeks. The last thing Crawford wants to do is to re-injure it or enter his shot at Horn’s WBO welterweight title having to worry about it.

Crawford suffered a deep bone bruise on the top of his right hand while sparring last month, which popped part of his cartilage out of place. The injury required rest, not surgery, but forced a postponement of the Crawford-Horn fight from April 14 to June 9 at MGM Grand Garden Arena in Las Vegas (ESPN+ app). 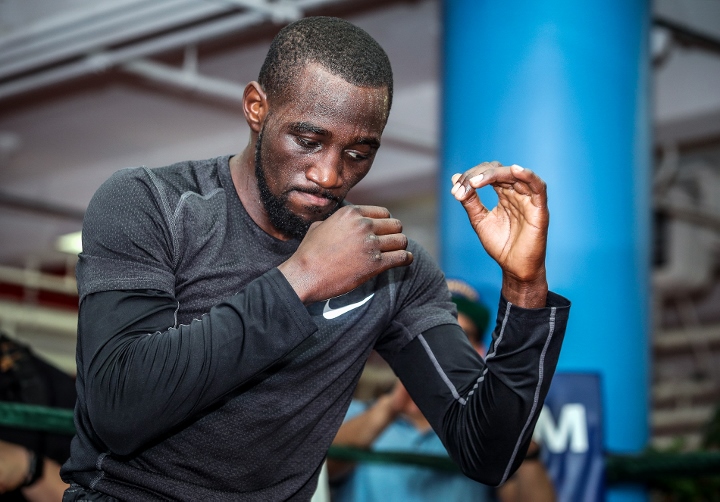 “I’m using it now,” Crawford told BoxingScene.com. “In the past I haven’t been using it. But I’m not out there trying to punch extra hard because I still can feel it a little bit. I’m not trying to go full-force yet.

“I’m trying to just bring it in easy, and then towards the middle of the camp I can test it out. But I don’t wanna rush into nothing. That’s how you get a [reoccurrence] of the same injury.”

The 30-year-old Crawford (32-0, 23 KOs) hasn’t had hand issues since he was an amateur. He hasn’t had to deal with any injury that forced him to postpone a fight since he turned pro in March 2008, either, which made this setback somewhat difficult to deal with.

Once his fight against Horn was postponed March 14, Crawford left camp in Colorado Springs to train lightly for a few weeks in his hometown of Omaha, Nebraska.

“It’s been a little frustrating, being that I was excited to fight in my first welterweight bout, especially it being a title shot,” Crawford said. “But everything happens for a reason, and we’re here now. We’re back in motion and ready to fight.”

By the time he enters the ring to battle Australia’s Horn (18-0-1, 12 KOs), Crawford won’t have fought in nearly 10 months, the longest layoff of his 10-year pro career. He last fought August 19, when Crawford knocked out Namibia’s Julius Indongo (22-2, 11 KOs) in the third round of their 140-pound title fight to become boxing’s first fully unified champion in any division since Jermain Taylor owned the IBF, WBA, WBC and WBO middleweight titles in 2005.

[QUOTE=Jab jab boom;18674386]Crawford isn't an old has been like Pacquiao. Crawford is going to embarrass horn with ease.[/QUOTE] Let see about that. Crawford will bloodied after the fight. Horn will make crawford run for his life.

uh oh, The Hornet might be catching Crawford at the right time here.

[QUOTE=Tatabanya;18679338]I have already responded to another person in regard to Horn's "quitting", please see my previous posts. I know he is not a fighter who really quits, but I'm also sure that if his corner had stopped him after the…

[QUOTE=Boxing lives;18679208]well if tc loses in america then he will have no excuses. he's got home advantage and isnt even the champ. i cant imagine horn quitting. tc is gonna have to keep this animal off for twelve rounds. Tall…

[QUOTE=Tatabanya;18674774]Pacquiao was indeed a bloody mess... and yet "savage" Horn was about to quit halfway through the fight before someone told him that the judges would have him winning. Still, one has to admire your confidence in that poor man's…