Cook: Munguia Thinks I'll Be Easy, But He Hasn't Been Tested

The unbeaten WBO junior middleweight champion has been complimentary of the unknown Canadian contender since their 12-round, 154-pound title fight was finalized a little more than a month ago. That trend continued during the press conference at MGM Grand for the Canelo Alvarez-Gennady Golovkin undercard. 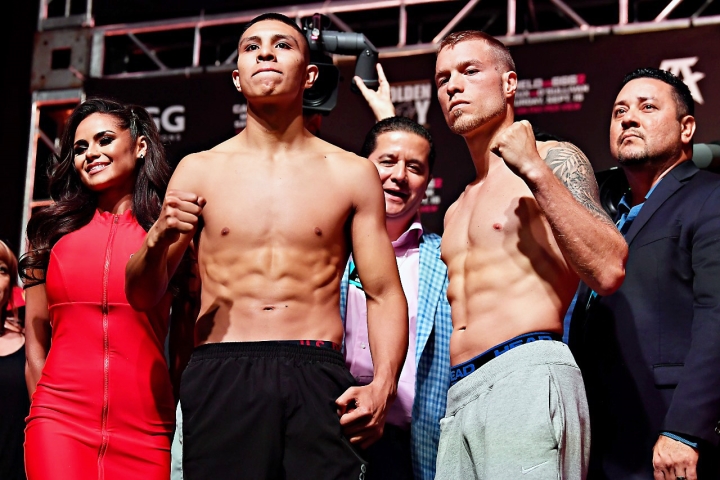 “Oh, for sure, a hundred percent,” Cook told BoxingScene.com following the press conference. “Everybody does until they get in the ring with me. Everybody underestimates me, but he’ll figure it out soon. For me it’s great, because it’s the biggest card of the year.

“I’ve trained really hard and this is a world title shot, so this is everything I’ve ever dreamed of. You’re not gonna get an easy fight to fight for a world title. So I just think he thinks he’s in for an easy fight. We’re gonna see about that.”

The 21-year-old Munguia (30-0, 25 KOs) is listed as a 50-1 favorite by some sports books over the 32-year-old Cook (20-1, 13 KOs), of Ajax, Ontario. Cook thinks those odds are entirely too wide because Tijuana’s Munguia hasn’t completely proven himself as an elite fighter.

Munguia made the first defense of his title July 21, when he knocked down England’s Liam Smith (26-2-1, 14 KOs) in the sixth round and beat him by unanimous decision in their 12-rounder at Hard Rock Hotel & Casino in Las Vegas.

The young, strong Munguia won those two fights convincingly, but he showed plenty of defensive flaws and didn’t do enough to convince Cook that he can’t pull off an upset.

“He hasn’t been really tested yet,” Cook said. “He’s only had two big fights, right? So I’m gonna have to test him, that’s for sure. I’m gonna do everything I can, like I said, to show him why I’m here today.”

Until about a year ago, Cook had a full-time job installing doors and windows in Ontario. He often trained after working 12-hour days, but he has noticed a dramatic difference since he has become a full-time boxer.

Cook has won both of his bouts by knockout since Kazakhstan’s Kanat Islam (25-0, 20 KOs) stopped him in the ninth round last September 9 in Astana, Kazakhstan. He was supposed to box England’s Kell Brook (37-2, 26 KOs) on July 28 at O2 Arena in London, but Brook withdrew from their fight due to an ankle injury.

“Now I’m actually training like all these other guys train,” Cook said. “I train full-time now. I had a full-time job my whole career, except for my last two fights. It’s gonna make a big difference. And my body has changed so much since I’ve been able to train two, three times a day, six days a week. People don’t know who I am here. People know who I am in Canada. After Saturday night, they’re gonna know who I am. … I’m not here just to get paid. I’m here to win that world title.”