Dennis 'Martillo' Contreras is back on the prowl.

The veteran spoiler from Guadalajara will enjoy a quick ring return as he has been tabbed to headline the fall season premiere of Boxeo Telemundo. The moment will come in a clash with unbeaten featherweight prospect Carlos Efrain Flores (20-0, 11KOs), which takes place October 2 live on Telemundo from a crowdless Osceola Heritage Park in Kissimmee, Florida.

Contreras (22-10-1, 9KOs) will enjoy a five-week turnaround, coming off of the most significant win of his career. The 28-year old featherweight threw caution to the wind in scoring a 5th round knockout of Belmar Preciado in an upset win on August 28, taking place in this very venue in delivering one of the best memories to come of bubble events this summer. 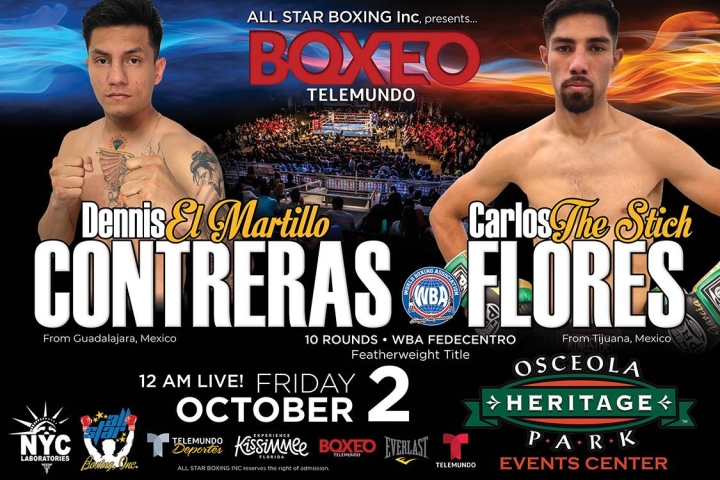 “Martillo Contreras is always ready to fight and rose to the occasion; we absolutely had to reward him for that,” Felix ‘Tutico’ Zabala Jr., president and owner of All Star Boxing told BoxingScene.com. “Now he’s back to face an unbeaten prospect, just like in his U.S. debut when he beat (Fernando Garcia, 12-0 at the time) to prove himself on this level.”

Contreras endured a rough stretch prior to his latest run, having managed just a 1-8-1 mark in 10 fights—including a January 2017 loss to Emanuel Navarrete who would go on to capture a 122-pound title and an August 2018 defeat to former titlist Hugo Ruiz. A long-awaited trip north of the border for his stateside debut changed his luck last May, having now scored two straight wins in the U.S. and aiming for the hat trick.

“I'm on a mission to become a world champion, and Flores is in my way,” insists Contreras.

Standing in his way is a teenaged prospect who steps up in class in his own U.S. debut.

Flores (20-0, 11KOs) has been out of the ring since a 5th round knockout of Giovanni Juarez last October in Guasave, Mexico. Exactly 52 weeks will have passed by the time the 19-year old Tijuana native returns, this time in his first career fight outside of Mexico and against an opponent with a winning record.

“I am excited to be on in the October 2nd main event,” insists Flores, who turned pro at age 16. “This is a dream come true, and I am looking forward to showcasing my talents.”

The show kicks off a four-week fall season run, with all four events taking place on successive Fridays and from the assigned Kissimmee bubble.