A prevailing theme for athletes during the COVID-19 pandemic has been to make the time work for you. Adapt in an uncertain time and find a way to still move forward. Belfast contender Michael Conlan has done just that, and in the midst of losing his annual St. Patrick’s Day fight in New York City and being forced from training camp due to lockdowns at home, he’s still found a way to smile.

“The simple thing that got me right on the straight from the start was that there were people dying in the world,” he said. “Maybe I'm not getting to fight, but I'll fight again someday. People are dying right now and that was the thing. How can I be the guy complaining? People were dying, people were losing their jobs, people are broke. I'm in a good position in life. I'm a happy person. I have a family, I have my health, and that's the main thing. A fight being canceled or postponed, so be it. It's not the end of the world and that's the way I looked at it.”

He even found a silver lining in traveling all the way to the Big Apple, only to lose the bout with Belmar Preciado before it even happened.

And after some pizza in Little Italy, he was on a plane back to Belfast, where he got to spend time at home with his wife Shauna and kids Michael Jr. and Luisne. A lot of time, for the first time in over a decade.

“That's the longest I've been home since I was around 17 and since I broke onto the Irish National team,” said Conlan. “I used to live there Monday to Friday every week, and obviously I went pro and I've been away in training camps for months basically my whole career so far. So it was my longest time off and, if I'm gonna be honest, it was the best I've ever felt. I'm in the best shape I've ever been in, physically, mentally. I've come into camp later than what I ever came in, I'm fitter and stronger than what I ever came in, so I think the lockdown has benefited me so much.”

If the 28-year-old Conlan is in camp, that could only mean that he’s about to break his stay on the sidelines and get into a fistfight. And that will be the case when he faces French veteran Sofiane Takoucht at BT Sport Studio in England on August 15. It’s a big fight, as they all are for the unbeaten Irishman as he moves closer to a title shot, so it’s good that he feels in the best shape of his 13-fight pro career. But it’s not a cliché when he says what all his peers say before a fight. His feelings come not from what’s happening in the gym in London (though that doesn’t hurt). It’s what happened during lockdown that has him rejuvenated as he goes for his 14th victory without a defeat.

And no, it wasn’t bread baking or polling folks on Twitter for the best chocolate bar.

“It's always good to talk about it to get it out there,” laughed Conlan of his culinary adventures, which didn’t last too long before he started missing the Spartan life of a fighter.

“I kind of got fed up of living a normal life very quick, and just got straight back into training,” he said. “For the first time in a long, long time, I was in training without having to do it and enjoying it. It's easy when you're a boxer and it's a job for it to get boring and monotonous. It's the same thing every day. But when I didn't have to do it and it was my choice to do it, it gave me that love for it again and that's why I benefited from it so much. I've been in this sport 21 years and it's been my whole life, and that's been the first real break I've ever had and the longest break I've ever had. It reignited a passion and a fire inside me that I didn't know was still there.” 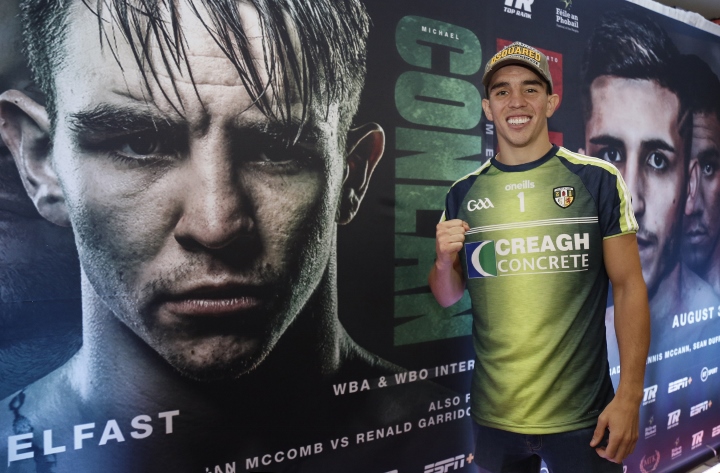 The timing to get that spark back is perfect, especially since Conlan had his eyes on a title before 2020 was over. He still hopes to reach that goal, but now he’s aiming for a belt four pounds south at super bantamweight as the first stop on his quest to win belts in three divisions. That means his chocolate bar jones will have to be restricted to Twitter, as he hopes to challenge newly crowned Angelo Leo for the WBO 122-pound crown considering he is ranked third at the moment. Of course, there is the issue of Stephen Fulton Jr. getting the first crack at Leo after being forced out of their bout last weekend die to a positive COVID-19 test, but those are all details that mean nothing if Conlan doesn’t get by Takoucht. And he should, but what looks like a sure thing on paper can unravel quickly if the favorite isn’t prepared mentally.

“This is gonna be a tough fight,” said Conlan. “On paper, yes, I should beat him and (IBF featherweight champion) Josh Warrington stopped him, but Josh Warrington isn't the same fighter as me. He's an aggressive fighter and I'm not that kind of aggressive guy who goes in there and tries to take people's head off from the first bell, although I do believe I will stop this guy.”

He pauses, reorganizing his previous thoughts to declare that maybe, just maybe, with no fans in attendance, he will get to show off a different Mick Conlan a week from Saturday.

“The whole thing around fighting in front of no fans, I'm really, really excited about it,” he said. “It's something different and I believe you'll see a different Michael Conlan. I think this is gonna show a different side of me, and I think you will see a more aggressive fighter, a guy that just wants to put on a show because I know this is a real opportunity. I don't have to go in there and play to the crowd or anything. I've been sparring with no music, nothing on in the gym, just silence. You're hearing the breath, hearing the punches and hearing that pain coming through an opponent. I am really, really excited about it, and this is a fight where I think I can showcase an awful lot. There will be an awful lot of eyes on this show and I think I can go out there and put on a good performance.”

And with fellow Belfast standout Carl Frampton headlining the show, it’s a night for fans in their hometown to escape for a bit and see two of their own represent the city. That means a lot in the COVID-19 age, and with Conlan already doing his part to bring awareness to the mental health issues and suicides in Northern Ireland, that escape is needed more than ever.

“I think it means a lot,” said Conlan. “To see two of Belfast's best going out there and putting on a show on for the city during all this craziness and showing that we still have that fighting spirit and we're ready to battle at any time is good because obviously with the mental health side of things, you gotta be ready to battle at any time because it can just spring on you at any time. So to see guys doing their thing through all this stuff and putting that work in, I think a lot of people will be happy to see it and it gives them something to look forward to.

“On fight night, I'll be repping the mental health badge on my shorts,” he continues. “It's something very close to me and I know I excelled in the lockdown, but I know for a lot of people, this pandemic would have had a detrimental effect on them. The thought of getting locked up and stuck home with nobody around could be very, very hard for a lot of people, so hopefully now that things have eased up and people can maybe get out and watch the fights and get back to normal, hopefully this fight can do that for a lot of people.”