Conlan: I'm Ready To Go Out There & Destroy Nikitin!

NEW YORK – Three years after suffering one of the most infamous Olympic losses in boxing history, Michael Conlan can’t afford to take a personal approach to his rematch versus Vladimir Nikitin.

The featherweight prospect from Northern Ireland is trying his best to treat their 10-round, 126-pound bout Saturday night the same as his first 12 professional fights. Otherwise, Conlan could make their third encounter a much more difficult fight than he thinks it should be on the Terence Crawford-Egidijus Kavaliauskas undercard at Madison Square Garden.

“I’m cool, calm, collected,” Conlan told BoxingScene.com before a press conference Wednesday at The Garden. “I’m ready to put on a big performance. I’m not taking an emotional approach or attachment to it. I’m just gonna go in and perform Saturday night.” 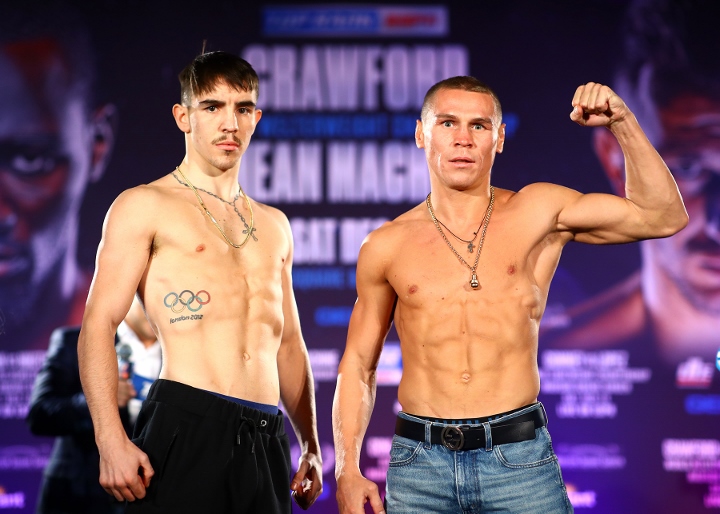 Conlan acknowledged, of course, that this is a more meaningful fight than any of the bouts he has won since he made his pro debut in March 2017.

The 28-year-old Conlan clearly deserved a points victory over Russia’s Nikitin in the bantamweight quarterfinals at the 2016 Summer Olympics in Rio de Janeiro. When Nikitin surprisingly was announced as the winner, an angered and shocked Conlan stuck up his middle finger at the judges before leaving the ring.

In hindsight, Conlan considers the aftermath of that amateur nightmare to have had a positive impact on his career.

“It’s bothered me, obviously, but do I think it’s had a negative effect on my career? No,” Conlan said. “It’s been a very beneficial thing that’s happened, so I’m very grateful. But do I need to get the victory back? Yes, 100 percent. It’s just about righting that wrong, and I believe Saturday night is my chance to do that. And I believe I will. I’m excited about it.”

Conlan and Nikitin were supposed to fight August 3 at Falls Park, an outdoor venue in Belfast. Nikitin suffered a biceps injury, which caused a four-month postponement.

Nikitin defeated Conlan twice in the amateurs. Their first fight, which Nitikin won on points in 2013, was much closer than their Olympic match, according to Conlan, and could’ve gone either way.

The thought of avenging those two losses has provided Conlan with more motivation than he has had in any other training camp.

“This is the first kind of real fight I’ve been able to get my teeth into,” Conlan said, “the first one that’s kind of got me up in the morning and maybe have that little bit of fear, because he has previously beat me twice. But I’m very, very confident. I haven’t overlooked him at all. I’ve trained very hard. I’ve been in training camp for 14 weeks. So yeah, I’ve given everything this time and I’m ready to go out there and destroy this guy.”

He's going to destroy him with low blows like he usually does?