A series of firsts await Friday’s edition of Boxeo Telemundo, save for the traditional Puerto Rico vs. Mexico theme in the evening’s main event.

Emanuel ‘Pinky’ Colon and Richard Zamora both made weight for their scheduled 10-round regional junior welterweight title fight, which airs live on elemundo from the sold-out Seneca Niagara Resort and Casino in Niagara Falls, New York (Friday, 11:35pm ET).

Puerto Rico’s Colon (16-1-1, 15KOs)—who now lives and trains in nearby Buffalo, New York—weighed 139.8 pounds, while Matehuala, Mexico’s Zamora (19-3, 12KOs) checked in at 139.4 pounds. Both boxers make their respective debuts on the Telemundo circuit, which for the first time in its 30-year history airs live from a location outside of Florida or Mexico. 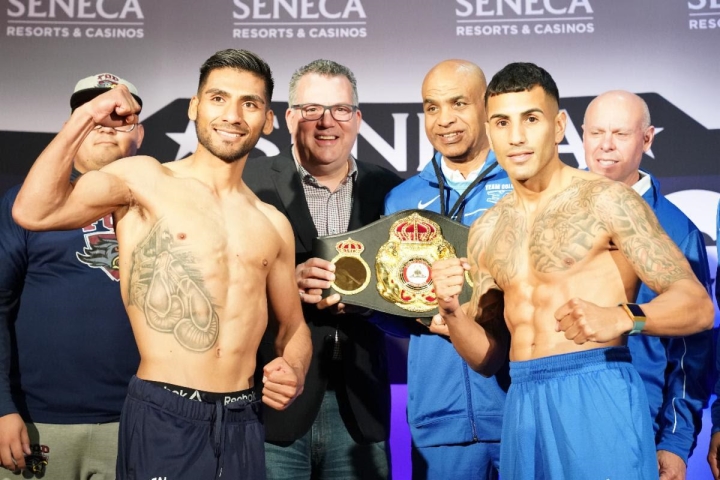 Colon carries a two-fight win streak and a strong local following, with a standing-room only crowd to be on hand for his first fight in his adopted hometown.

Zamora looks to recapture form prior to start of 2019, as his run of five straight wins came to a screeching halt following a 4th round stoppage loss to Mario Barrios this past February in Carson, California, a fight in which he accepted on short notice.

Also of interest on the card in the new location is another transplanted Boricua, as Wilfredo ‘El Bravo Vega’ Flores (7-0, 3KOs) faces fellow islander Adrian Martinez (3-2, 3KOs) in a scheduled six round junior welterweight bout.

Flores—who relocated from Ponce, PR to Dunkirk, New York, roughly 45 minutes from the venue—weighed 138.6 pounds for his first ring appearance in upstate New York since a knockout win in his 3rd pro fight in May 2016. Caguas, PR’s Martinez weighed in 139.2 pounds.