Claressa Shields: I'd School Braekhus, She Will Lose To Taylor!

Claressa Shields does not expect Cecilia Braekhus to face her.

She predicts Braekhus will take the "easier" route by facing Katie Taylor, who would be moving up in weight. 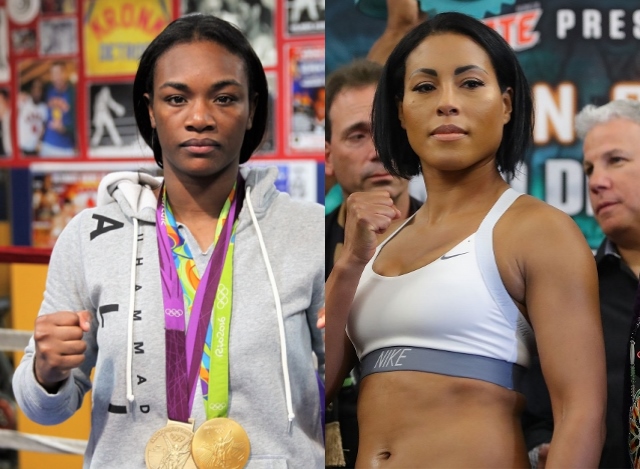 Earlier this month, Shields moved down to junior middleweight to capture the WBC, WBO world titles.

Shields then called on Braekhus to face her.

Taylor recently captured a world title at junior welterweight. She would later vacate the belt, but appears to be open to the idea of heading up to welterweight to face Braekhus.

“We want a big fight against Katie Taylor," Braekhus said to Dagbladet, according to The 42. “But we agree that before the summer there will be a run-up match. Both Taylor and I need it, and then it will be building up to this mega-fight over the summer."

Shields expects Braekhus to go in that direction - and she expects Taylor to win that fight.

“The thing with Cecilia is if she wants to fight, we can fight — we’ve got a million reasons to make the fight happen,” Shields said to Dagbladet. “Braekhus told me at 168 that my weight was a problem. Okay: I won titles at 168, I became undisputed at 160, now I’m at 154.

“Now, you don’t hear about her no more. She’s not calling me out. So my thing is, look, they can think what they want to think. Braekhus don’t have skills like me. I would school her. I would knock her out. That’s why she’s going down to 140 to fight against Katie Taylor. Like, first of all, you (Braekhus) are undisputed champion at 147 — for years. What reason do you have to go down to 140? [Because] it’s the easier fight. It would be undisputed against undisputed, her against Katie Taylor.

"In my opinion, Katie Taylor is going to beat her, but she will not knock Cecilia Braekhus out. And Cecilia can live with that. Cecilia would not be able to live with me going in there, coming down three weight classes when I’m supposed to be drained and tired, but fighting way better than her, and I’m from the new era. She wouldn’t be able to deal with that."

[QUOTE=Monty Fisto;20341713]Is anyone, anywhere claiming that the talent pool isn't shallow in women's boxing? It's a developing sport. Of course the talent pool is shallow.[/QUOTE] It’s been “developing” for quite some time now. I don’t think that’s the problem. The…

[QUOTE=joseph5620;20341824]I agree. It's extremely unprofessional.[/QUOTE] Im really turned off about how everyone ganging up on this girl disrespected her like this.... One thing for us to do it... But this is just low and immature asf.

[QUOTE=KillaMane26;20340979]This the second article about her saying "him" Its a little funny but its disrespectful asf. Leave those petty digs to posters you POS[/QUOTE] I agree. It's extremely unprofessional.

[QUOTE=OctoberRed;20341041]I believe Shields would easily beat Braekhus at 154. Im not so sure Taylor would beat Braekhus at 147.[/QUOTE] Nobody is beating Braekhus easily. I think even at 38 she's still the most skilled female fighter. If Shields goes down…