Claressa Shields Easily Boxes Past Hermans, Hammer Up Next

Shields will now move forward to a Showtime televised clash with Christina Hammer, which is being targeted for a date in March or April.

Saturday night was a quick turnaround for Shields, who defeated Hannah Rankin by unanimous decision on Nov. 17. Hermans, who owns the WBO super middleweight title, had won her previous three fights. 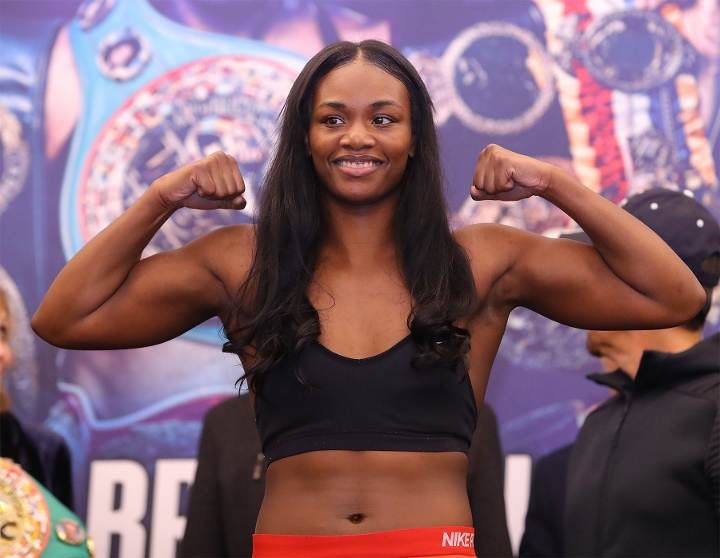 Shields easily won the early rounds as she was the aggressor, forcing Hermans to fight off her back foot.

Two counter left hooks to the head midway through the third round snapped Hermans’ head back, momentarily stunning the fighter from Belgium.

Hermans was at her best when she attempted to counter Shields’ offense, landing right hands to the head of Shields. A noticeable welt appeared on the left side of Shields’ eye from the number of punches Hermans connected.

Shields swum momentum her way by working behind a consistent jab during the second half of the fight. She mixed her attack by throwing and connecting with lead right hands to the head.

Hermans would switch from conventional to southpaw and vice-versa throughout the fight, but it did little to throw off Shields.

Shields connected with a barrage of punches to Hermans’ head at the end of the seventh round, but Hermans was able to get through the round.

Shields momentarily stunned Hermans at the end of the 10th round, but was not able to drop her opponent to the canvas.

Shields is hard to watch and not worth a cable fight. Shields should be fighting in a bar or a taco bell lobby. Hard to stomach Clarabelle shields the tattooed mess.

Claressa is one of the best women in boxing, she need to sitting more of her punches. Give me more explosive punches Aka. Laila Ali.:boxing:

Shields should improve on her power, she throws lots of Fury punches...nice win thought and it is time women boxers up their games with KOs