Shields was busier and more accurate than Hannah Rankin on her way to winning a 10-round unanimous decision on the Jarrell Miller-Bogdan Dinu undercard at Kansas Star Arena in Mulvane, Kansas. 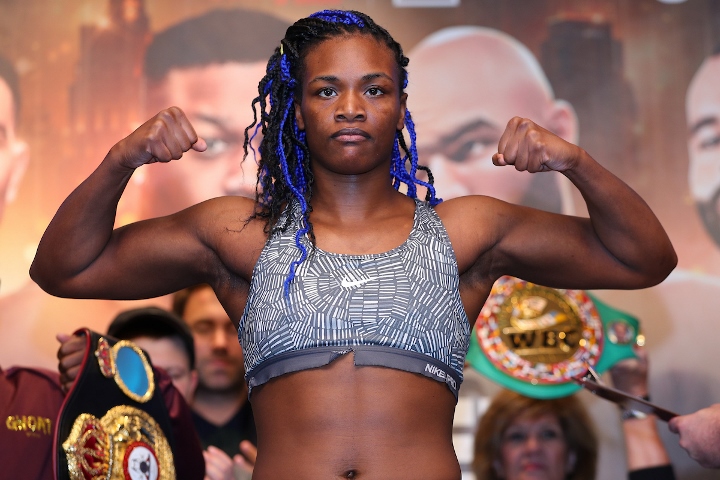 The WBC declared Hammer its champion in recess because she is temporarily unable to defend that crown while she recovers from an illness.

Shields was supposed to meet Hammer, also the WBO champ, on Saturday night in a middleweight title unification fight. Hammer withdrew from their bout shortly after it was announced late in September due to an undisclosed stomach ailment.

The Shields-Hammer match is supposed to be rescheduled early in 2019, perhaps as early as March.

Scotland’s Rankin, 28, lost a lopsided, 10-round unanimous decision in her last fight. Somehow, that defeat to Alicia Napolean on August 4 didn’t prevent Rankin (5-3, 1 KO) from fighting for three middleweight titles.

It was obvious Shields was superior to Rankin from the time the opening bell rang.

Shields clocked Rankin with an overhand right to the side of her head just before the end of the second round. Rankin recovered by the start of the third round and managed to avoid any damaging shots during those two minutes.

A counter right hand by Shields knocked Rankin off balance toward the end of the fourth round. Shields landed an overhand right to the head and followed with a left to the body with about 30 seconds to go in the fifth round.

A right hand by Shields buzzed Rankin and made her move away from the champion early in the second half of the sixth round. Rankin landed more punches in the seventh round than in previous rounds, but couldn’t keep Shields from coming forward.

Shields regained command in the eighth round, when she landed an assortment of power shots. Rankin made the last two rounds reasonably competitive, but Shields built on her wide lead and won convincingly.

In the bout before Shields’ win, super flyweight prospect Nico Hernandez out-boxed Josue Morales to win a unanimous decision in an eight-rounder.

Hernandez (6-0, 4 KOs), a 2016 Olympic bronze medalist from nearby Wichita, won all eight rounds on two scorecards (80-72, 80-72) and took seven rounds on the other card (79-73). Houston’s Morales (8-8-3) boxed well in the first few rounds, but Hernandez’s hand speed and activity eventually enabled him to pull away from the 25-year-old southpaw.

I wish people would just accept the fact that women are not built for boxing. Women boxing is like men belly dancing.

I like Claressa Shields, but, this fight was boring as hell

What an embarrassing mismatch.

[QUOTE=boxingnumber247;19280339]Dazn app its $10 bucks a month﻿ Good Deal ![/QUOTE]Im watching on Kodi for free, but if I couldn’t stream I would for sure pay for the App. Because of how many shows they’re doing, it will kinda be like…