ATLANTIC CITY – About the only thing Claressa Shields didn’t do to Ivana Habazin on Friday night was knock her out.

Shields essentially toyed with the out-classed Croatian contender for 10 rounds and easily won a unanimous decision in their 154-pound title fight. The Flint, Michigan, native now has won world titles at 168, 160 and 154 pounds.

Judges Debra Barnes (100-90), Lynne Carter (99-89) and Robin Taylor (100-89) all scored the fight for Shields by large margins. Shields dropped Habazin with a body shot in the sixth round, but she went the 10-round distance in her sixth straight fight.

By accomplishing that feat in just her 10th professional fight, Shields beat the record established by Vasiliy Lomachenko and matched by Kosei Tanaka. Ukraine’s Lomachenko (14-1, 10 KOs) and Japan’s Tanaka (15-0, 9 KOs) each became three-weight world champions in their respective 12th fights in 2018.

Shields still is the undisputed middleweight champion. She intends to move back up to 160 pounds to defend her IBF, WBA, WBC and WBO titles in her next fight.

“We spent so many months in camp for this fight,” Shields told Showtime’s Jim Gray in her post-fight interview. “It wasn’t what I wanted, but I’m happy with the improvement. This feels great – I did it in 10 fights. Now I’m number one, the fastest boxer in history to become a three-division world champion.”

The last three rounds were mostly mirror images of one another – Shields trying to knock out Habazin and Habazin doing everything she could to survive until the final bell.

Shields battered Habazin throughout the seventh round. Habazin held and took Shields’ shots in those two minutes, though, to take their fight into the eighth. 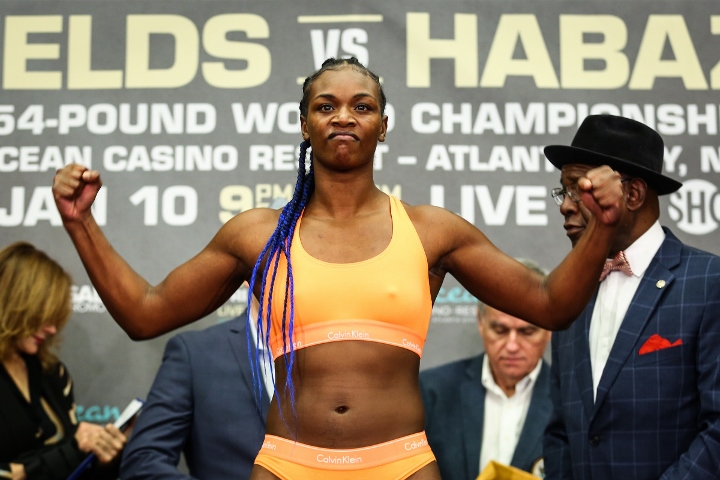 Shields went after Habazin at the start of the sixth round. She landed several hard head and body shots before a left hook to the body sent Habazin to one knee with about 50 seconds to go in the sixth round.

Shields tried to finish off Habazin, who managed to make it to the bell to end that round.

“Andre Ward said, ‘Sis, take her to the body,’ ” Shields said of the advice Ward gave her from ringside. “I was throwing all body shots in the first minute and then, ‘Boom!’ She went down.”

An off-balance Habazin tried to fend off the skillful Shields during the fifth round. Shields landed some punches, though some of her shots missed.

Shields sensed she hurt Habazin with about 40 seconds to go in the fourth round. Habazin backed away from her, but Shields couldn’t land another impactful punch.

Shields landed two left hooks in the final minute of the third round.

Habazin stepped to Shields as soon as the opening bell rang, but Shields quickly established her advantages in speed and skill. She worked off her jab in the first round and hammered away at Habazin’s body as Habazin attempted to hold her.

Shields and Habazin finally fought Friday night after having their bout postponed twice.

They initially were supposed to fight August 17 in Flint, but Shields suffered a knee injury early in training camp. It was rescheduled for October 5 in Flint, but it was postponed again October 4 because Habazin’s trainer, James Ali Bashir, was brutally assaulted at their weigh-in.

Habazin wouldn’t agree to go back to Flint, thus the fight was brought to a neutral site in Atlantic City.

The hate against Claressa Shield is REAL.:hitit: