Add another former opponent to the list of those ripping Canelo Alvarez.

Gennady Golovkin said last month that Alvarez’s muscles had “traces of injections” when the two men fought as middleweights last September, and former Nevada senator Harry Reid said last week that Floyd Mayweather was concerned Canelo was “on something” before their 154-pound bout in 2013.

“Every top athlete seems to be getting caught with some kind of PED,” Cintron said. “If he got caught once, I'm sure he's been doing it for most of his career. Just like Margacheato.”

“Margacheato,” for those somehow unaware, is Cintron’s oft-repeated moniker for two-time for Antonio Margarito – whose reputation was forever trashed after he was caught with tampered hand wraps prior to a bout with Shane Mosley in 2009. Margarito had stopped Cintron twice, in 2005 and 2008, retaining his WBO 147-pound crown in fight No. 1 and taking Cintron’s IBF crown in the rematch.

Margarito lost to Mosley and was subsequently beaten by Manny Pacquiao (UD 12) and Miguel Cotto (TKO 9) in title fights at 154 pounds. He was inactive for more than four years before returning in 2016 and stringing together defeats of Jorge Paez Jr. (UD 10), Ramon Alvarez (SD 10) and Carson Jones (TD 7).

Cintron is hoping Canelo’s penalty is substantial and severe.

“A fighter should get a two-year suspension,” he said. “His excuse was just as bad as a kid telling the teacher that the dog ate the homework. He was caught red-handed cheating. A suspension in Nevada doesn't mean anything because he can fight in Mexico. Having one commission in boxing is what needs.

“I honestly didn't think too much of him when I fought him. He was a lot faster than I expected but wasn't as strong as people make him to be. I rate Sergio Martinez over him skill-wise.” 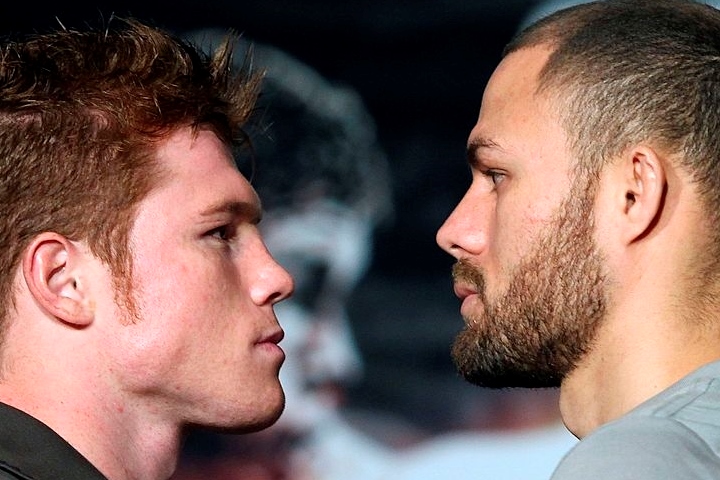 Against Golovkin last summer, he was 160 pounds.

“If you look at the likes of De La Hoya, Hopkins, Trinidad, Cotto, Jones Jr., Hearns, who all started at a lighter weight and went up a few weight classes,” Cintron said, “their bodies never looked any better than when they were at the weights where they started. They all were in great shape but never looked ripped and with more muscle. Those guys to me are legit.

But before that day comes, he’s got some resume clean-up he’d like to do.

Cintron said he asked his promoter to reach out to Margarito’s team about a third match between the rivals and claimed “both sides are in agreement” to get it done. It’s still an iffy proposition at best – pending money and other factors – but could happen in June or July, perhaps in Florida.

The “Sunshine State” has been career-defining territory for Cintron, who stopped David Estrada (TKO 10) in Palm Beach in April 2006 and defeated Mark Suarez (TKO 6) there to win the IBF championship six months later. He drew with Sergio Martinez over 12 rounds in Sunrise on Valentine’s Day 2009, then outpointed Alfredo Angulo at the Seminole Hard Rock Hotel and Casino that September.

Cintron is 8-4-2 with a no-contest in 15 fights since, including a technical decision loss to Paul Williams, a desultory 10-round disappointment against Carlos Molina – both in Carson, California – and the aforementioned TKO by Canelo in Mexico City. The no-contest came in his most recent outing in February, when a cut from an accidental butt ended matters against Marquis Taylor in the third round.

He conceded the Williams fight is one that still gnaws at him eight years later. Cintron swept the first three rounds on one scorecard against a 26-year-old version of Williams – who arrived at 38-1 with 27 knockouts – but saw the fight abruptly end in the fourth when Williams fell to the canvas and Cintron went through the ropes all the way to the floor following a tie-up in the ring.

Cintron exited the stadium on a stretcher. He lost a split decision thanks to California rules that stated, even though the fourth round had barely begun, the fight was official and the segment needed to be scored. Judge Jerry Cantu had Cintron up, 40-36, but was overruled by James Jen Kin and Fritz Werner, who had it 40-36 and 39-37 for Williams.

HBO’s Jim Lampley, calling the fight from ringside, said it “doesn’t seem like enough of a fight for Williams to have earned a victory. But that’s the way the rules work here in California.”

“(Williams) was saved by Al Haymon that night,” he said. “It's a fight that bothers me, but I moved on. I moved on from all my losses. Losses that I should have never lost.

“I would just like a third fight with (Margarito) and call it a day in my career.”

Fitzbitz says: The challenger’s ranking is respectable enough, but the reality is that he’s not fought anyone on Higa’s level and doesn’t seem likely to break his string of stoppages. Higa in 7