Light middleweight Eduard Skavinskiy used his vast offensive arsenal at its fullest for a solid win in the main event of a tourney, staged by RCC and Titov Promotions this past Saturday in Ekaterinburg, Russia.

Opposing Skavinskiy was Belarussian journeyman Dmitry Atrokhov, who was unexpectedly active during the opening rounds. Skavinskiy (13-0, 7 KOs) gradually improved his game to dominate his foe during the last two rounds. Final scores were: 98-92, 97-93, and 96-94. Atrokhov, who started his career with 15 consecutive wins, drops down to 16-8, 7 KOs. 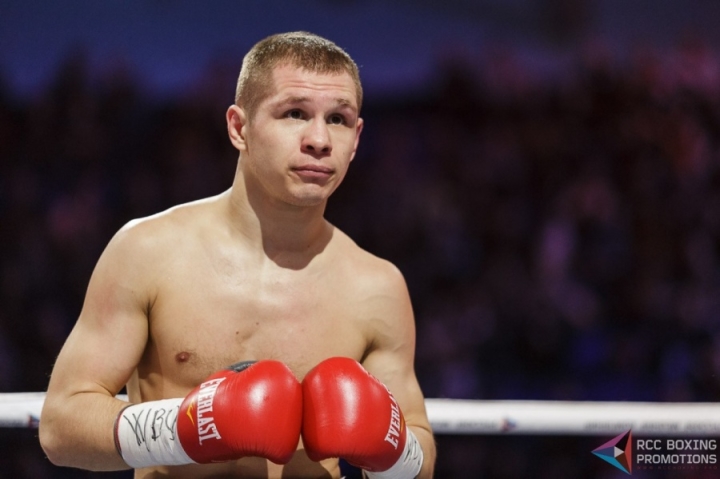 Following two consecutive losses to considerably less heralded teammates in Mark Urvanov and Vladimir Krasnoshein, former WBO super featherweight title challenger Evgueny Chuprakov was forced to come back to very soft opposition he can deal with at the time.

On Saturday night, Evgueny, nicknamed Happy Gilmore, was indeed happy and lucky not to get more serious opponent than the 43-year old veteran Alexander Fedorov, who was last seen in the ring six years ago. Amazingly, Fedorov (22-8-1, 12 KOs) looked competitive against Chuprakov in the first couple of rounds but then predictably degraded under fire. Chuprakov (now 22-3, 12 KOs) dropped Fedorov with the left hook in the fourth, and forced the stoppage at the conclusion of the sixth with massive body punishment.

Young Ukrainian import Zoravor Petrosyan (9-0, 4 KOs) looked good in a solid stoppage of late sub in Russian welterweight Evgueny Vazem. Vazem had his nose bleeding in the second round, produced a very solid effort in the third but ultimately surrendered at 1:02 of the fourth. He is now 9-12, 4 KOs.

Light heavyweight prospect Vasiliy Voytsekhovskiy (4-0, 2 KOs) put an exclamation mark to a very solid performance by knocking out previously undefeated Timur Pashaliev (1-1-2, 1 KO) with a straight right hand early into the second round.