Chudinov Learned From Defeats, Ready to Turn Page on Career

When Dmitrii Chudinov steps into the squared circle this coming Saturday in Tashkent, Uzbekistan, he will fight his opponent on the one hand, and for his career on the other. After years of injuries, bad luck, and promotional issues, the 31-year-old Russian boxer will give it another try to turn it all in his favor when he faces local prospect Azizbak Abdugofurov in a 12-round bout for the vacant WBC Silver super middleweight title.

The last name Chudinov first came into consideration in 2013 after Dmitrii made up to No. 6 on the WBA rankings and fought No. 7 Juan Camilo Novoa for the interim title in a middleweight division that was then wide open with a WBA-champ Gennady Golovkin on his way to unifying it.

A year later, Fedor joined his older brother on the world title level when he secured the same belt a class north at super middleweight. The younger Chudinov went on to beat multiple times 160-pound titleholder Felix Sturm and ultimately became the full champ by the sanctioning body until George Groves mauled him on the undercard of Kell Brook’s unsuccessful world title defense against Errol Spence Jr last May in Sheffield, England. 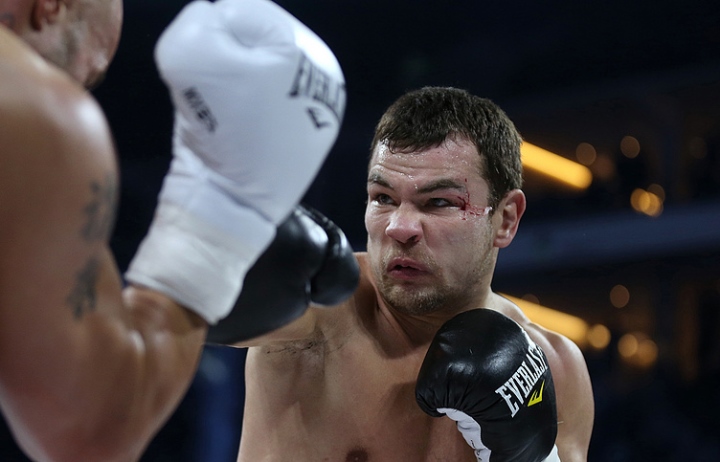 After two defenses of his interim title against former challenger Mehdi Bouadla and then-unbeaten Patrick Nielsen, Dmitrii had his share of nightmares on British soil when he got overpowered by Chris Eubank Jr in a 12th-round technical knockout fiasco, a defeat that happened to take more than just the unblemished record from Chudinov.

“Dmitrii did disappear after he lost to Chris Eubank Jr. The problem was that he didn’t have the right camp and I don’t think he had the right team around him. Although they did set up the opportunity with Chris Eubank Jr, Dmitrii needed a completely different type of preparation and completely different type of camp for that fight,” told Chudinov’s recent promoter, Al Siesta to BoxingScene.com.

“Dmitrii got cut right in the middle of the camp and couldn’t spar, he had really bad weight situation where he didn’t make the weight properly because he was very stressed about not being able to spar resulting in him being handicapped in his preparation and Chris Eubank Jr was a new up and coming fighter, a hot prospect. In fact, his trainer at the time told him not to take the fight due to the problems in the camp, but his management team insisted he took the fight as they had contractual obligations with Frank Warren.”

In the long term, this whole scenario forced the Russian pugilist to spend long years of his prime in limbo; facing mediocre opposition in his country for peanuts instead of fighting against top opposition on European TV while securing his future from a financial standpoint.

Dmitrii’s good luck struck in on a late 2017 meeting with his countryman, Siesta, through his company, Siesta Boxing Promotions offered his services and ultimately signed Chudinov (21-2-2, 13 KO) to help overcome the dark shadows for the once highly rated contender.

The debut of the duo, however, turned to become like a backlash of past struggles as Dmitrii suffered a ten-round decision loss to world-rated veteran Lolenga Mock in Copenhagen, Denmark.

“When we went to Denmark I knew even if I won the fight I was never going to get the decision against Mock. It was a loss that I have consciously taken just to get myself active and back in the ring. Then I beat Khamitski,” told Chudinov to BoxingScene.com.

Unsurprisingly, the latter bout the Russian fighter mentioned had its own share of controversy. On February 24, Chudinov was scheduled to face then-unbeaten prospect Nieky Holzken until the B-side of the main event of that World Boxing Super Series fight card, Juergen Braehmer got injured and promoters filled the void with Holzken. That left Dmitrii beat last-minute substitute Siarhei Khamitski over eight action-packed rounds. Weeks later, the bout against Abdugofurov for the WBC Silver title came into the picture.

“This opportunity [in Uzbekistan] came when I was contacted by the promoter of Abdugofurov asking me if I would be interested in matching Dmitrii Chudinov with Azizbek. Dmitrii had just fought on the undercard of a WBSS event, which obviously raised his profile considerably. After some negotiations, I gladly accepted the fight because I felt Dmitrii has a good chance and it’s a great opportunity for Dmitrii to jump up the rankings.”

The 26-year-old Abdugofurov (10-0, 4 KO), though he has an unblemished record, has never faced an opponent with major international experience. This, however, does not mean he can not fight at a higher level. Kudratillo Abdukakhorov and Shohjahon Ergashev are just two of the younger generation of Uzbek pugilists who broke out of the countryside in the hopes of major world titles on the international fight scene.

“Abdugofurov is a good fighter. He’s a young undefeated prospect, but I do believe Dmitrii Chudinov is a serious step up for him. Dmitrii is a decorated amateur and a solid professional with big experience. I don’t know if Abdugofurov will be able to cope with Dmitrii. One thing I do know is that it will be a very hard and competitive fight,” Siesta said.

Chudinov shares his promoter’s view on his Saturday foe and believes his experience can help him jump the hurdle Azizbek settles.

“The beauty of the fight is that I don’t really know anything about Abdugofurov, all I know is about Chudinov and I know that when I am prepared properly for a fight I can deliver and that’s what matters. I have checked a couple of his fights and yeah he looks like a decent, competent fighter, but nothing I haven’t seen before,” Dmitrii said.

After a rocky start this year with a mixed record, Chudinov is perfectly aware that this is a must-win for him if he is about to put himself into consideration regarding a title fight in the near future.

“The difference between the Mock and Khamitski fights compared to the preparation in this fight is that I have had a proper camp. I feel the best I have ever felt, I feel very sharp, so that’s the difference between then and now. All the mistakes are corrected and hopefully, I can deliver, but ultimately everything is with God’s will.”

God knows this will be a fair fight regardless of the fact that a young, unbeaten prospect enjoys the home advantage over a veteran fighter. The Russian-born, UK-based Siesta is hoping for the best.

“I would be worried about being in the away corner, but this is a WBC contest. The WBC is very fair and a very solid organization. I trust the referee and judging panel to make the right decision according to the fight.”

A win is crucial for Chudinov, and, though his promoter’s sole concentration is on the task at hand, the future outlines behind the dust.

“If Dmitrii beats Abdugofurov I have big plans for him. But I don’t want to jinx it and talk too early!  There is the United Kingdom with fighters like; Chris Eubank Jr, George Groves, James DeGale, Jamie Cox, Rocky Fielding and John Ryder. There is a massive stable in the UK with super middleweights in which we will have to go through and have competitive fights.”

It seems Chudinov is finally back on the right path regarding his career. What separates him from the above-mentioned list of hot fighters is really a win on Saturday. One he is desperate to take in order to secure his future in the sport.

“I wish that 2018 can end in a major fight somewhere in the United Kingdom against a massive name. But let’s take one fight at a time; I have Abdugofurov as my next stop.”