Christopher Diaz: Nobody Can Beat Me At 122; Can Be Undisputed Champ There

Christopher Diaz has lost only to a current featherweight champion in a 126-pound bout and to a former junior lightweight title-holder in a 130-pound fight.

After winning back-to-back bouts at the featherweight limit, the 25-year-old contender is convinced that he can move down and conquer the junior featherweight division. Weighing in at 124¾ pounds for his impressive victory over Jason Sanchez on Tuesday night in Las Vegas encouraged Diaz even more that his next fight should take place at 122 pounds.

“If you saw the weigh-in [Monday], I weighed 124,” Diaz told BoxingScene.com following his win against Sanchez. “I made that weight easy, man. I could push a little bit more and make 122. I can be a world champion. I’ve got five years to make that happen. I’ve got a family and I’ve gotta make all that happen for them.” 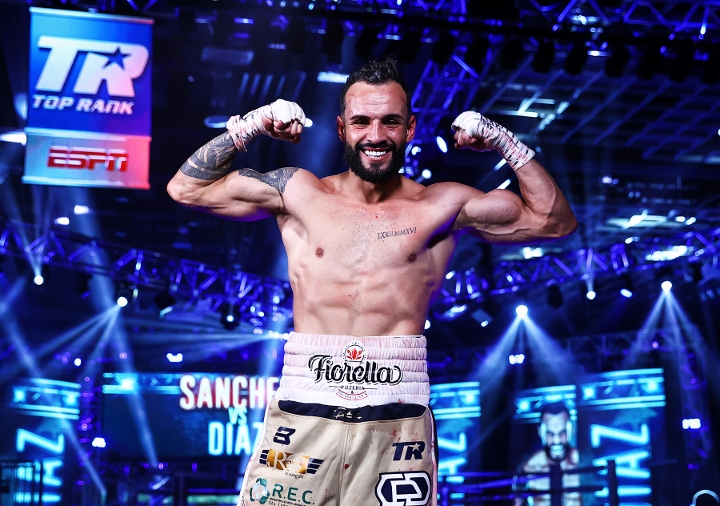 Diaz competed within the 130-pound division for nearly two years, until Japan’s Masayuki Ito (26-2-1, 14 KOs) knocked him down during the fourth round and comfortably beat him by unanimous decision in their 12-round fight for the then-vacant WBO junior lightweight title in July 2018. Each of his three bouts since suffering his first defeat have been contracted at the featherweight limit of 126 pounds.

He has won back-to-back bouts convincingly since Shakur Stevenson (14-0, 8 KOs) defeated Diaz by unanimous decision in their 10-rounder 14 months ago at Madison Square Garden in New York.

“At 126, people couldn’t [take] my punches,” said Diaz, who is trained by Freddie Roach. “I went up to 130 and I fought Ito, and I fought 12 rounds. It was like a war, and it still went to a decision. At 122, nobody can beat me. I can be undisputed champion there, and then go back up to 126. That’s my plan, man. I’m so dedicated right now. I wanna feed my family the right way, and this is my time right now.”

Mexico’s Navarrete is expected to give up his WBO 122-pound championship to compete at 126 pounds, which could open up an opportunity for Diaz to fight for that vacant title. Diaz is the WBO’s 11th-rated contender in the featherweight division.

Diaz is open to remaining at featherweight for the right fight, but his preference is to move down four pounds.

Whichever weight is next for Diaz, he is pleased with how he performed versus Sanchez (15-2, 8 KOs). Diaz out-boxed the 25-year-old Sanchez, of Albuquerque, New Mexico, and won a fight ESPN broadcast by comfortable margins on all three scorecards (98-92, 98-92, 97-93).

“I know how to box,” Diaz said. “I learned from the Shakur fight how to hit and not get hit. I felt like if I got hit four times in this fight, it was too much. It went great. I worked so hard in the gym with my team. We did a great job. I think we’ll be champion real soon.”

[QUOTE=BigZ44;20632857]He thinks he can make 122? I'd be worried about how drained he would be, easier weight class though, he might be able to pick up a belt if he can get to that weight healthily[/QUOTE]He can probably make it…

He thinks he can make 122? I'd be worried about how drained he would be, easier weight class though, he might be able to pick up a belt if he can get to that weight healthily